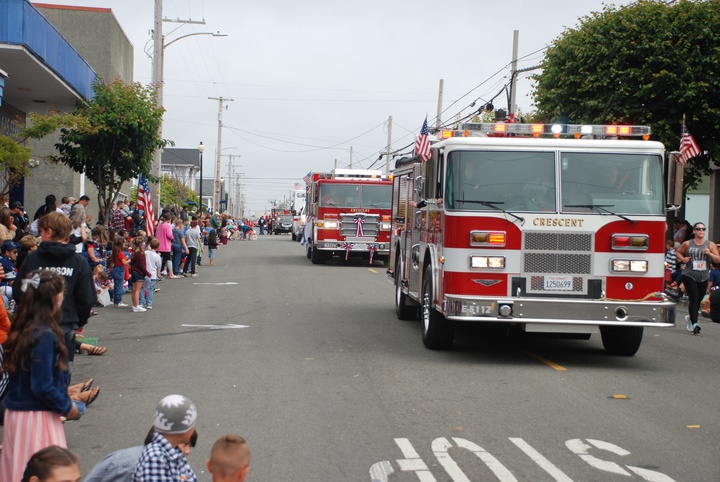 Though they teamed up to gauge voters’ opinion on a tax for public safety, the city and county will pursue separate ballot initiatives as they look to the Nov. 3 general election.

The Crescent City Council on Wednesday unanimously directed staff to move forward with a proposed 1 cent general sales tax measure to be applied within city limits if voters approve it.

County supervisors passed a similar measure Thursday, voting 4-1 in favor of a 1 cent general sales tax that would apply to the area outside of city limits if it passes. District 1 Supervisor Roger Gitlin dissented, advocating instead for a sales tax measure specifically for the Del Norte County Sheriff’s Office even though it carried a 2/3rds majority threshold for succeeding.

According to Bryan Godbe, of Godbe Research, which polled the community last week, since the Del Norte County Unified School District is considering a general obligation bond measure, Del Norte County voters may be asked to support both an additional sales tax and an increased property tax assessment.

Voters living within the Crescent City Fire Protection District may also see a separate ballot in September and October with a proposed property tax assessment that benefits the district, Godbe said. That measure seeks to increase revenue as the district and Crescent City Fire transition to a hybrid fire agency that incorporates both paid personnel and volunteers.

A 1 cent sales tax measure that applied to the county as a whole, including the city, would result in $3 million in revenues if it passed, Godbe told Councilors.

Del Norte County would allocate about 40 percent of that, roughly $1.2 million, to Crescent City, he said.

A sales tax measure that applied only to the city would also generate about $1.2 million in revenue to the city, Godbe said.

On Thursday, County Administrative Officer Jay Sarina told supervisors that removing the city from the overall tax measure would reduce the amount of revenue the county would receive if the measure passes.

Why a tax?
At a joint meeting Nov. 21, 2019, the Crescent City Council and the Crescent City Fire Protection District Board adopted a 10-year master plan with an ultimate goal of instituting three full-time paid captains working with a crew of two volunteers covering 24-hour shifts at the fire station on Washington Boulevard.

The fire captains would work 48 hours on and 96 hours off and the volunteers would be paid a small stipend. A fire chief or another volunteer officer would serve as the shift’s duty officer who would respond to major calls like a structure fire or a vehicle extraction, Fire Chief Bill Gillespie explained at that November meeting.

On Wednesday, City Manager Eric Wier said the goal was to put the department in a position where it could accommodate increasing calls for service. In 2018, Crescent City Fire & Rescue volunteers responded to 1,600 calls. That number increased to nearly 2,000 calls, Wier said.

This year, he said, firefighters are expected to respond to more than 2,000 calls for service.

Implementing this plan, which included allocations for apparatus and equipment as well as training, would cost a total of $662,714, City Manager Eric Wier told Councilors on Wednesday. The cost would be split with the city covering $307,000 and the fire district kicking in $465,640, Wier said.

In November, City Councilors had discussed the possibility of a sales tax measure within the city, while the Crescent City Fire & Rescue Board, which is funded through property tax assessments, considered a property tax measure to replace an assessment that sunsets in 2021.

“Those things were moving forward rapidly when COVID hit,” Wier said. “We now have an $800,000 deficit that the Council just adopted. We’re not in a sustainable position now.”

On the city side, a sales tax measure could also be used to implement the Crescent City Police Department’s staffing plan, which calls for backfilling positions to allow for two officers and a sergeant on each shift as well as a school resource officers and a new detective position, Wier said. That’s expected to cost $373,000 total, he said.

Revenue from a sales tax measure could also be used to help fund the Fred Endert Municipal Pool, which costs the city about $400,000 per year to operate when it is open. The pool has been shuttered since March due to the COVID-19 pandemic and will likely stay closed through the summer due to budgetary constraints.

The amount Crescent City’s general fund subsidizes the swimming pool, 67.5 percent, is average for a community of its size, Wier said, citing a pool master plan finished in 2019.

“To have a pool we would realize the fact that it’s not going to make money,” he said. “The community is going to have to subsidize it for the service it provides.”

Wier, citing Godbe’s survey, which showed that pothole repair and street maintenance was the top priority for voters, said tax measure revenue would also be used to repair and maintain the city’s streets, including Front Street.

On Thursday, Del Norte County Sheriff Erik Apperson said he struggles with retaining his deputies because “as a county we’ve just allowed compensation to be so poor.” Compensation for deputies are so poor, he said, the sheriff’s office can’t compete with other agencies, including the Crescent City Police Department.

Apperson acknowledged that passing a specific tax measure would be more of a challenge — a general tax measure would require a 50 percent-plus-one majority, according to Godbe. But, Apperson said, he thinks the community would support such a tax.

“The super majority doesn’t bother me at all,” he said. “I think if the public had a clear picutre and if they knew specifically what initiative was behind it, we would gain a lot of support. Especially if we put effort into how we market it.”

Could it pass?
Godbe, whose firm surveyed voters by landline, text message and email between June 11-16, said the results reflected a sample size of 438 with a 4.58 percent margin of error. The survey included a question about the COVID-19 crisis and assumed that 10,000 Del Norte County voters would participate in the November election.

Most people held a favorable view of how local government was handling the health emergency as well as the county’s ability to provide services and its management of taxpayer dollars, Godbe said.

Fifty-nine percent voted definitely or probably yes in favor of the proposed tax, Godbe said. But, he said, with the margin of error showing a worse-case scenario of about 53.5 percent, voters would need more information, especially those whose yeses were probable.

Ultimately, the survey showed, that when informed about the measure — including the caveat that the sales tax wouldn’t be applied to groceries or prescription medication — 55.3 percent indicated they would support the measure, according to Godbe.

“That puts us right on the bubble,” he said, noting that the margin of error is about 5 percent. “One of the things that’s clear is that an information effort needs to happen as does an advocacy campaign if this measure’s going to have any sort of success.”

Though they can pay for information efforts, the city and county can’t pay for an advocacy campaign, Godbe noted.

During Godbe’s presentation to the Board of Supervisors on Thursday, District 5 representative Bob Berkowitz, whose company Lifestyles Research conducts similar surveys, said respondents often ask about a guarantee that the money will be used for the needs outlined in a general tax measure since it only requires a simple majority vote to succeed.

“What we’ve seen over the years in virtually every jurisdiction is everybody’s doing a citizens oversight, particularly in a general tax,” he said.

Following Apperson’s input, Gitlin said he supported a 1 cent sales tax in the unincorporated parts of Del Norte County, but he felt that its revenue should be dedicated to law enforcement, even if that means developing a separate measure.

“Sheriff Apperson has made an impression on me that we need to have an addressing of how we compensate our deputies as an initiative to not lose people,” Gitlin said. “I feel strongly about putting in the component for law enforcement despite the hurdle. The sheriff made an impression on me and I would have to say that we should include that. Reluctantly I would say no if we exclude law enforcement as part of the equation.”

He also argued that his first responsibility is to city residents, and having a tax measure that applies to Crescent City only ensures that it has complete control over any revenue it generates.

“It’s not about not supporting the county, it’s about addressing the critical needs of our community and the city,” he said.

During his presentation to both the county and city, Godbe said he doesn’t think the school district’s bond measure will negatively impact either sales tax initiative since any revenue it generates will be used to improve school facilities.

Councilors Alex Fallman and Jason Greenough agreed with Inscore, saying that the city drafting and moving forward with its own sales tax initiative independent of the county ensures that it takes responsibility for its own needs.

“Fire, police, roads to a certain extent,” Greenough said. “We need to step out on our own and fund these as a city so we can make sure the funds are going where we need them to go. The uncertainty of putting the money in the county’s hands and hoping they pass down what we need, that’s too much.”

Mayor Pro Tem Heidi Kime said that if the city partnered with the county on a single sales tax initiative, she had faith that the county would allocate 40 percent of that revenue to the city. But having a single sales tax initiative along with the school district’s potential bond measure and a special property tax assessment vote for Crescent Fire & Rescue could “splinter votes,” she said.

Kime said she thought a sales tax initiative for the city specifically would be more successful. But, she noted, it won’t just impact city residents.

“If we have a sales tax, it’s going to affect everyone, including the tourists that come here,” she said. “They’re the ones that are going to be helping us fill the coffers to have these public safety needs.”

Kime also pointed out that most people who frequent the swimming pool come from outside the city limits. Meanwhile, Crescent City’s firefighters and police officers, particularly its K9 officers, don’t stop at city limits, she said.

“We’re going to do this separately, but it doesn’t just benefit city residents,” she said.

In addition to directing staff to begin drafting a city-only ballot measure, the Crescent City Council on Wednesday asked staff to bring a contract with Planwest Partners before them next month.

The Arcata-based consultant, which helped put together the fire department’s master plan last fall, is expected to do much of the outreach for the city’s sales tax initiative, according to Wier. He estimated that would cost the city between $10,000 and $20,000.

On Thursday, County Counsel Joel Campbell-Blair said it would be best for the Board of Supervisors to vote on a resolution establishing the county’s tax measure on July 14, but at the latest it should approved by July 28.

Both measures need to be submitted to the Del Norte County Elections Office by Aug. 6 to appear on the November ballot, according to Godbe.