Snow and Rain Forecast for Tuesday; National Weather Service Warns That Driving Conditions Will Be Dangerous » 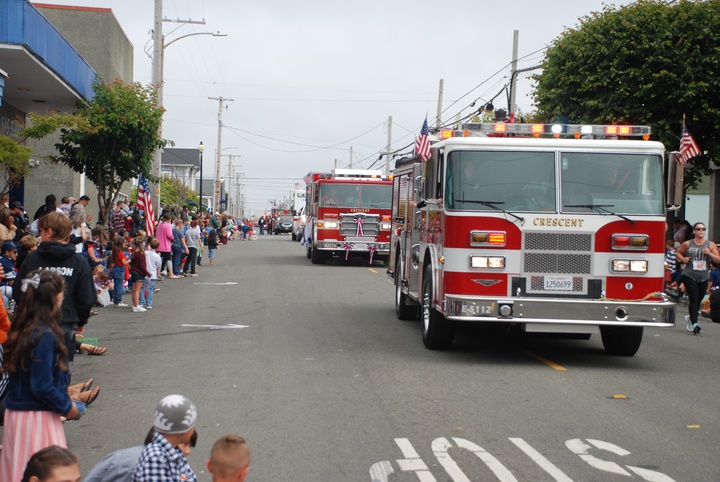 Choking back tears before his colleagues on the Crescent City Council and the Crescent City Fire & Rescue Board of Directors on Thursday, Wright said he and his wife had already faced the death of their oldest son, so both began panicking when their 9-month-old struggled to breathe due to an egg allergy.

Wright and his fellow Council members along with the Crescent City Fire & Rescue Board took the first step toward transforming the volunteer agency into a hybrid agency that relies on paid and unpaid personnel to keep its community safe.

But that vision is on paper currently. Both boards adopted a 10-year master plan at a joint meeting Thursday and approved implementing the plan’s first phase, which includes an equal cost-share model for paid staff and other items. The City Council and Crescent City Fire & Rescue Board approved agreements with Arcata-based Planwest Partners to begin polling the public on whether and how they want to pay for such a fire department.

Both boards also authorized Crescent City Human Resources Director Sunny Valero to seek and hire a permanent fire chief. Interim Fire Chief Bill Gillespie told the Outpost on Thursday that he will be submitting an application.

Under the agreement with both entities, Planwest will provide an engineer’s report and gage public opinion on how to generate revenue for the proposed fire agency model.

According to Crescent City Manager Eric Wier, who also serves as a volunteer fire department, a succession plan for a sustainable department was the vision of former chief, Steve Wakefield.

However, Wier said, Wakefield was unable to implement his plan. The former fire chief was forced to leave his post following a stroke in January 2018. He died in April 2019.

These calls include responding to medical aids, traffic collisions, fires and other emergencies, Gillespie said. He noted that most of his firefighters work full-time jobs in addition to covering for blocks of 12 days in a row plus weekends.

“With the call volume we experience here, we’re very much like a smaller career department,” Gillespie said.

In addition to finding a permanent fire chief, the 10-year master plan for Crescent City Fire & Rescue proposes to place its current part-time deputy chief and maintenance positions with three full-time paid captains, according to Metz. Determining whether those captains would be eligible for benefits under the Public Employee Retirement System would be a decision both agencies will make at a later date, Metz said.

There would also be a duty officer — either the fire chief or another volunteer officer — who would respond to major calls like a structure fire or an extrication, Gillespie said. The captain working with his or her sleeper volunteer crew could be in a burning building threatening to collapse, he said. The duty officer’s job would be to take in the bigger picture, coordinate rescues and ensure the crew’s safety, Gillespie told both governing bodies.

“The thing a duty officer, or as a firefighter, you never ever in your career want to hear is ‘mayday, mayday,’” Gillespie said. “That means your people are in trouble. But if you hit that point, you’ve got to have somebody in that role that can quickly shift the other people to focus on a rescue to be able to go after our own.”

A duty officer’s presence is also important when multiple calls come into the station at the same time, Gillespie said. This gives the agency additional resources to handle both calls, he said.

For volunteers, being part of a sleeper program will help them pursue a future as a career firefighter in Calfire or the United States Forest Service or in a larger municipal department, Gillespie said. They will also have the opportunity to try for the captain positions when they become available, he said.

According to Wier adding paid captains to the staff and eliminating the deputy chief and maintenance positions would cost roughly $600,000. Implementing a fire station staffed with paid personnel would cost about $1.6 million, he said.

The master plan also calls for establishing an equipment replacement fund with each agency setting aside dollars annually to create enough for a downpayment or a contribution if a replacement was paid for by a grant, Wier said.

Things that can be implemented immediately, in addition to filling the fire chief position, is to expand the agency’s group of volunteers and provide training and incentive programs as well as to increase community outreach efforts by using social media and revamping the department’s website.

According to Metz, implementing the masterplan, including would require a total additional allocation of $662,000.

Paying for an evolved department

The Crescent City Fire Protection District is currently funded through two property assessments, Metz said. One, established in 1987, charges $24 per single-family home. The other, established in 2006, charges $18 per single-family home and sunsets in 2021. The 2006 assessment would need to be replaced with a new one totaling about $465,000, she said.

Wier argued that the fire department’s current staffing model of one paid full-time chief, a part-time maintenance worker and part-time deputy chief isn’t sustainable. Staffing and duty officer coverage is the department’s biggest need, he said, adding that volunteers often answer as many as 12 to 13 calls a night.

To fund the proposed changes, Metz said, the city and the fire protection district can levy a special tax that requires a 2/3rds voter approval in a general election. Though cities can levy a sales tax, districts can’t, she said. The city can also pursue a development fee, but the county would have to implement and collect development fees on behalf of the fire protection district, Metz said.

The masterplan also asks Metz and Planwest to gauge the feasibility of potentially implementing a special sales tax within city limits. Crescent City's rate 7.25 percent with an additional quarter percent sales tax to fund the Del Norte County Fairgrounds, Metz said. She said a sales tax measure specifically for public safety or fire would require a 2/3rds majority to pass. A general sales tax measure that doesn’t specify what the funds would be used for would require a simple majority to pass, Metz said.

“Susanville is proposing a 1 percent sales tax for fire and police,” Metz said. “We’re watching that to see whether that gains support in their community.”

Metz noted that the public outreach effort in Crescent City and Del Norte County would determine if voters would support a sales tax measure and, if so, whether it should be a quarter cent sales tax or a half cent sales tax.

Response from elected officials, the public
Elected officials from both boards commended the hard work Wier, Gillespie, Metz and other staff put in to create the masterplan. Mayor Pro Tem Heidi Kime said she liked the proactive stance the plan took, adding that firefighters can’t do their jobs without proper equipment.

Both her colleagues, Alex Fallman and Jason Greenough, said though they’re not a fan of tax increases, it would be difficult to function without a fully staffed fire agency.

“This is not about just a frivolous tax increase like we’re seeing on a state level,” Greenough said. “This is about making sure our departments have the tools and they have the people in place to best serve our community in their time of need.”

Jim Nelson, chairman of the Crescent City Fire & Rescue board, said it’s important for people in the community to realize how important the fire department is.

Volunteer firefighter Dennis Sutton, however, said he doesn’t see Crescent City residents supporting a sales tax increase. He said he’s heard from people who have opposed a tax increase, but he hasn’t heard anything negative about the proposed $100 property assessment.

“Multiple people come to me and tell me, ‘Hey, what’s going on here,’” Sutton said. “I don’t want to go through this and not make it.”

Eric Wier’s father, Rich Wier, who has served with Crescent City Fire & Rescue for about 40 years, noted that a quarter-cent sales tax increase to help fund the Del Norte County fair sunsets in 2022. He said a sales tax for the fire district would replace the fair tax.

When the time came to approve recruiting and hiring a permanent fire chief, retired Crescent City Police Chief Ivan Minsal urged elected officials to pick someone who could inspire his firefighters.

“The difference will be a terrible fire department that will affect our community negatively and a great fire department that can enhance our reputation, our charisma and our outlook to the rest of the world,” Minsal said. “That leadership is critical. I know the work that Sunny Valero does and I know she’ll bring forward the best candidate.”