Kamome Mural Ready for Installation; A Second One Will Be Gifted to Rikuzentakata 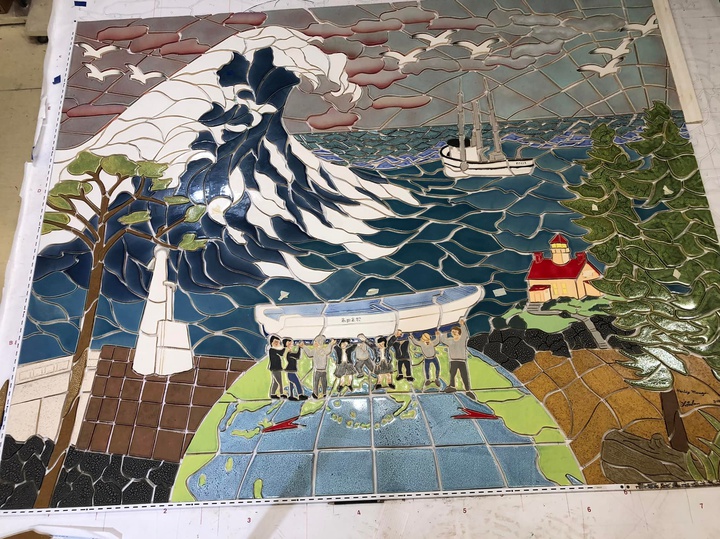 The puzzle mosaic mural Harley Munger created for the Sister City monument in Beachfront Park is ready for installation. | Photo courtesy of Piece by Piece Pottery

Crescent City’s monument honoring its friendship with Rikuzentakata is in its infancy, but the mural depicting the boat and the tidal wave that brought the two communities together is finished.

Harley Munger, who founded Piece by Piece Pottery with his wife Jill, also made the components of a second puzzle mosaic mural as a gift to Rikuzentakata.

“It’s not the whole mural we’re sending over,” he said. “It’s ceramic pieces so a mural could be made out of it. It could be put on a concrete wall, they can make their own frames — however they want to put it up.”

Munger’s latest creation is 8 feet long, 7 feet high, weighs about 600 pounds and consists of nearly 900 tiles. On the right is Battery Point Lighthouse shaded by redwood trees with the FV Rogue headed to sea. Rikuzentakata’s lighthouse is on the left under the eaves of the Miracle Pine, the lone surviving tree of the Takata Pine Forest preserved as a reminder of the March 2011 Great East Japan Earthquake.

Kamome, the 20-foot long fishing vessel that was swept away from Takata High School and washed ashore on South Beach nearly a decade ago, is in the center. Munger, who founded Piece by Piece Pottery with his wife, Jill, said his inspiration came from an illustration in the children’s book, “The Extraordinary Voyage of Kamome: A Tsunami Boat Comes Home.”

“I took one illustration right out of it, and that was the children holding the boat up,” he said.

The Crescent City Council entered into an agreement with Piece by Piece Pottery and PGAdesign in December to develop a monument honoring the Sister City relationship with Rikuzentakata.

City Manager Eric Wier proposed using a $170,000 per capita Proposition 68 grant the city had received and said it would be included in the park’s new interpretive cultural walk telling Crescent City’s story.

On Friday, Wier said PGAdesign is working on finalizing details of both the Beachfront Park masterplan and the Sister City monument itself. The mural will be a key component, but Wier said the design team is thinking of incorporating Tolowa history and culture because of their knowledge of tsunamis.

“They have a strong history and knowledge of tsunamis going much further back than any history we have,” Wier said. “There is a tie between the Sister City, Kamome, this mural, the Tolowa people and what they learned and knew about tsunamis as well. And then there’s the tie with Kamome and our high school and kids and that effort to return the boat. We’re thinking about all these different components and where to incorporate a mural within the park.”

Wier also pointed out that the 10-year anniversary of Kamome’s arrival on South Beach is coming up next year. By then Beachfront Park should be under construction, he said.

The Kamome Foundation, the nonprofit organization created to further ongoing exchanges between Crescent City and Rikuzentakata, is working on the celebration and on getting that second mural to Japan. But they’ve just started, said Crescent City Councilor and foundation board member, Blake Inscore.

Inscore, noting that the Kamome Foundation will be taking part in the Labor Day Bash at Beachfront Park and SeaQuake Brewing on Saturday, said he hoped to highlight the need to fundraise to get the mural to Japan.

“The city paid for the first one, but they did the second one and it’s not like the city paid for both of those,” Inscore said of the Mungers. “I talked to Mr. Wier about it and he asked, ‘can the foundation take the lead on that and find a way to hopefully raise the money to get it over and get it installed?’”

As for a celebration, Inscore said there will be one, but the planning for that is also in its infancy. He said he and county supervisor, Chris Howard, who is also on the Kamome Foundation board, have spoken with Kiyoshi Murakami, Rikuzentakata’s former senior executive, about how to resume exchanges between the two communities.

“There are a lot of moving parts and right now you still can’t travel into Japan independent of traveling with an official escort,” he said. “A delegation couldn’t just go. We’d have to be at the invitation of the city or a company or something.”

Inscore said he hopes to reintroduce people to the story of Kamome at SeaQuake Brewing on Saturday, but the foundation is taking baby steps to resuming travel between the two communities.

Meanwhile, after 10 months, Crescent City’s mural is condensed, taped and ready for installation and grout. Harley, who worked with two students at Del Norte High School’s Japan Club, along with his “right-hand person” Laura Haban, sketched out the design, breaking it down into individual tiles with a grout line. He cut out the template to create a pattern, rolled out the clay and cut out the pieces.

“Now we’re at the very ending phase, where he’s building the frame,” she said.

As in most of his murals — Del Norte County houses more puzzle mosaic ceramic mural than any other place in the U.S. per capita — Harley has added a personal touch.

According to Jill, who was a member of the Coast Guard Auxiliary at the time, their son Corey was on the FV Rogue with a number of other boats in March 2011 when the tsunami hit, wiping out the inner boat basin at the Crescent City Harbor.

“I got a call from Corey and he said, ‘Mom, can you call the Harbormaster down in Eureka because the harbor’s gone and we can’t get in and we can’t get to Brookings and we need a place to moor,” she said. “I called not only as the commander, but also as a mom and said, ‘Do you have harbor for all of these 45 vessels?’ They all came into Eureka together, but the vessel that our son was on was the Rogue and that’s the vessel in the mural.”