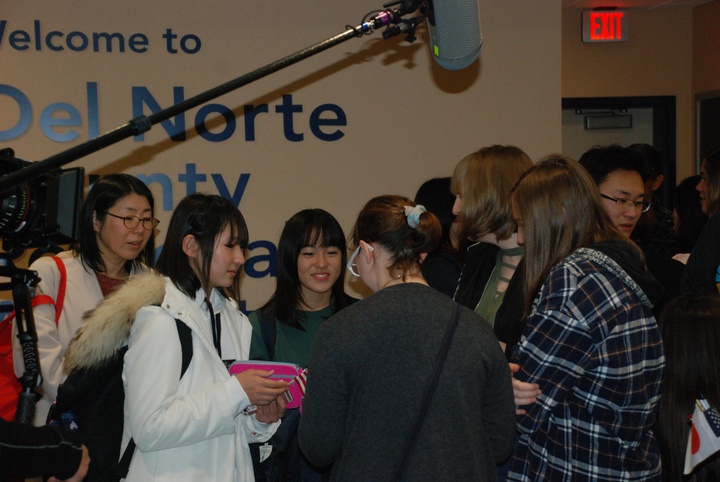 Students with Del Norte and Takata high schools greet each other during a 2019 visit. The Kamome Foundation was established to further exchanges between Del Norte County and Rikuzentakata, Japan. File photo: Jessica Cejnar

A new foundation dedicated to furthering cultural exchanges between Del Norte County and its sister community of Rikuzentakata, Japan, made its debut before the Board of Supervisors on Tuesday.

But the Kamome Foundation’s request of $2,190 to help it achieve nonprofit status and “build upon the non-governmental Sister City relationship” between the two communities fell flat. A motion to extend the donation failed due to the lack of a second.

Board Chairman Chris Howard, who is one of the new foundation’s officers, recused himself. District 5 Supervisor Bob Berkowitz was absent.

The requested dollars were budgeted through the county under “Travel and Training - Japan Delegation” during the 2020-21 fiscal year, but hadn’t been spent due to the COVID-19 pandemic, Kamome Foundation President Bill Steven wrote in a letter to Howard.

“That whole thing has been government oriented since the beginning,” Steven told the Wild Rivers Outpost on Thursday, adding that the Kamome Foundation was established in the last month. “We’re trying to get it away from taxpayer dollars and get it from crawling to getting it up on its own two feet.”

The Kamome Foundation is named for the 20-foot long fishing vessel that washed ashore on South Beach in 2013 — two years after the Tohoku earthquake and tsunami swept it away from Takata High School.

Though COVID-19 has paused international travel, the Kamome Foundation is dedicated to keeping those exchanges alive, Steven said.

“The odds of another exchange with the kids in the near future is probably low, but once things get back to normal we’re hoping that all gets back on track,” he said. “Right now we’re just slowly going through the process of the state and federal government to get things up and running.”

On Tuesday, District 2 Supervisor Valerie Starkey pulled the proposed donation to the Kamome Foundation off the consent agenda for discussion. She asked if it was common for a government agency to donate to a nonprofit organization.

Howard said Del Norte County donates to the Crescent City-Del Norte County Chamber of Commerce and the Visitors Bureau.
Starkey pointed out that both the chamber and visitors bureau provides a service to the community.

“What would the Kamome Foundation provide back to the community?” She asked.

Howard replied with the new foundation’s mission and said he didn’t think the proposed donation would be an annual request.

“I know the county sets aside funds for our travel and other associated exchanges between the two communities,” he said. “These funds weren’t utilized in this fiscal year and the idea was to contribute the remaining balance of those funds to the start-up of this foundation.”

However, since Howard had to recuse himself, he couldn’t call for a vote.

District 1 Supervisor Darrin Short made the motion to approve the donation request. It died due to a lack of a second.

As the Kamome Foundation finds its feet, Steven said, it will be seeking more people to provide input and membership. This includes continued interaction with Del Norte High School’s Japan Club.

However, the foundation isn’t ready to accept donations yet, though its representatives will welcome them when the time comes.

“We’re slowly trying to get this thing up and running,” Steven said. “Once the COVID era slips away, maybe we can get things back to the way they were and get more kids back and forth — probably next year some time.”