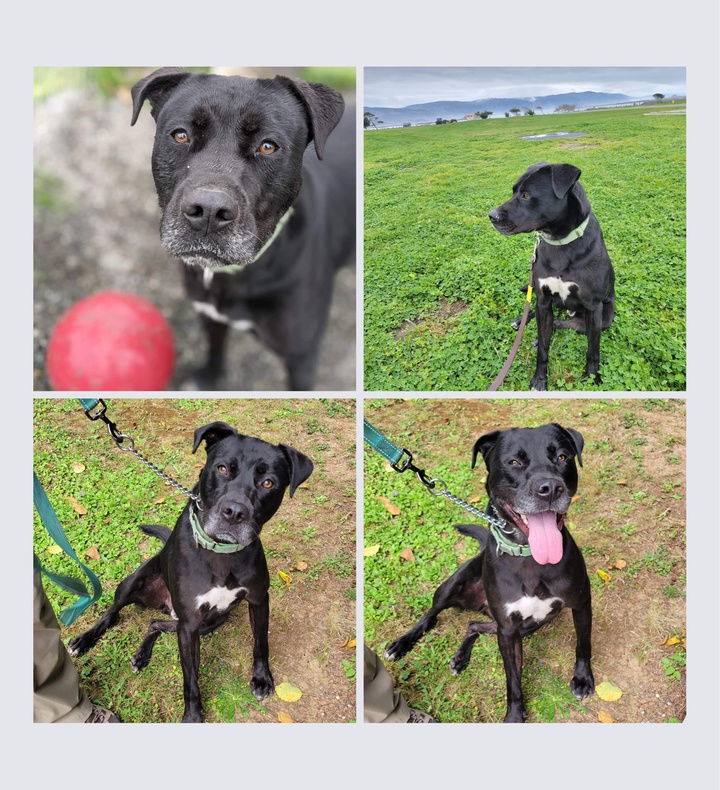 Garfunkel, a 3-year-old black lab mix, has been at the Del Norte County Animal Shelter for more than 650 days and is up for adoption. | Photo courtesy of Dogs of Del Norte County

Fierce opposition from Del Norte County residents and animal shelter staff prompted supervisors to abandon a proposal to modify its euthanasia policy and focus on a potential spay and neuter ordinance.

Though the pound is currently housing more dogs than it has room for, Animal Services Supervisor Brittany Pratt told supervisors on Tuesday Del Norte County would lose the support of other rescues if the shelter’s no-kill status changes.

“Our sister shelters have graciously accepted 105 dogs into their programs this year alone — all being transported by our volunteers,” Pratt said. “We have the support of our sister shelters simply because we are a pro-life shelter.”

District 1 Supervisor Darrin Short requested the discussion be placed on the agenda. With the county’s Animal Services Division transitioning from the agriculture department to the sheriff’s office, he wanted to have a frank conversation about the animals at the shelter. But for the Board of Supervisors to take action, the topic must be listed on the agenda as such, Short said.

Though he acknowledged that the number of dogs housed at the shelter had decreased from 40 as reported to the Board in July to 27 as of Tuesday, Short said the conversation is still needed. He said he wanted to ease the division’s transition to the Del Norte County Sheriff’s Office.

“This conversation is not what people are believing it to be in my opinion,” Short said, joking that he’s turned into the worst guy in Del Norte County. “I wanted to support our sheriff. There are limited resources to act on a lot of the problems we have at the dog pound. The Dogs of Del Norte volunteers gave us some stats and all of their volunteer hours they figured up and they’re just shy of seven full-time equivalent employees.”

Since 2008, the Del Norte County Animal Shelter has only euthanized animals if it was medically necessary or if the dog is unpredictably aggressive and unsuitable for adoption.

In 2009 supervisors approved a resolution adopting California Penal Code 599d and California Food and Agriculture Code Section 17005, both of which discourages euthanizing any adoptable animal.

On Tuesday, Short said if supervisors modify or repeal that 2009 resolution, its euthanasia policy would revert back to county code, which doesn’t say anything about a minimum number or maximum number of days before an animal is put down.

“It puts the onus of decision-making a little more freely in the hands of our animal control officers and sheriff,” he said.

District 5 Supervisor Susan Masten said she was glad Short placed an item on the agenda to discuss the Animal Services Division. After hearing from volunteer Angelina Davis on Aug. 23 that livestock conditions at the shelter were hazardous for the animals, Masten took a tour of the facility. She said she wanted to address maintenance issues at the animal shelter before handing the facility off to the Sheriff’s Office.

“Having taken that tour, the kennel itself needs some serious rehab,” Masten said. “The livestock facility, the fencing and having the ability for the animals (to) get out of the rain has to be addressed. Soon the rainy season is going to be upon us and that is not fair to the animals themselves for their health and safety to be in those situations.”

Masten’s colleague, Valerie Starkey, who represents District 2, pointed out that the item on the agenda is the euthanasia resolution. Since the county follows state law in this regard, there’s not a lot of wiggle room, she said.

“California has become a ‘no kill shelter',” Starkey said. “And I put it in quotes because there are times when we have to euthanize a dog. I’ve been working out there the day one of the dogs bit a girl’s arm and the next day the dog had to be put down. What we currently have allows for that decision-making to occur and I am not willing to change that.”

Both Masten and Starkey called for the creation of a spay and neuter ordinance in lieu of changing the euthanasia policy.

County Counsel Joel Campbell-Blair called state statute weird, saying that while it discourages euthanizing adoptable animals, the California Food and Agriculture Code also allows shelters a minimum time period they have to hold an animal before they consider putting it down.

“If we have this principle that we’re not euthanizing adoptable dogs, but we can’t afford to maintain the dogs, we’re probably not living up to the care for dogs established in the county code,” Campbell-Blair said. “Justin once said they don’t have the resources to go find homes (or) to take them to other animal shelters for a long-term fit. They don’t have the resources to do this well and so I would say at what point do you say an animal being held in there is better off euthanized? That’s a tough decision and not one the code is dictating.”

Scott, who said he’s been researching the state’s agriculture code, noted there’s a difference between vicious dogs and stray dogs and there’s a certain time period shelters have to hold them. Animals that are up for adoption have to be spayed and neutered, Scott said, but the code only allows seven days to do that.

“It gets pretty confusing,” Scott said. “How we spay or neuter a dog and have it adopted out in seven days is beyond me. If we’re getting too many dogs and we can’t afford to care for them, do we create a 501 c3 with Dogs of Del Norte and maybe move the dogs under their umbrella?”

Former sheriff Dean Wilson, who is running against Masten for the District 5 seat on the Board of Supervisors, said he refused to take responsibility over the Animal Services Division. The conditions at the pound that prompted that refusal have gotten worse, he said.

Wilson urged county supervisors and Pratt, who was just promoted to animal services supervisor, to explore the possibility of having Animal Services become its own department. The sheriff already faces a huge task without taking on that division, Wilson said.

“My fear is in burdening (Scott) at this time with the dog pound, which is also in dire need of a lot of attention and money, will merely distract and take too much away from his focus, which needs to be on that sheriff office,” Wilson said. “It would be far different if the pound was in good shape and the department was in good shape.”

It was Eileen Bennett, vice president of the Humane Society of Del Norte County, who urged supervisors to enact a countywide spay and neuter ordinance. Setting a time limit for euthanizing animals at the county shelter changes nothing.

“It’ll be a never ending cycle of death because dogs keep coming,” she said, adding that problems start before a dog winds up with the county. “What about the person who pays someone to care for their dog while they’re on vacation? The dog gets out, ends up at the pound and then dies before the owner returns from vacation. That’s what time limits do. What about the dog who gets stolen from Texas, lands here and dies before the owner can be found? That’s happened in Del Norte County — not the dying, but the dog being stolen from Texas.”

Bennett, who coordinates the Prison Paws Partnership program — which pairs shelter dogs with Pelican Bay inmates who foster them — pointed out that one of their current dogs needed more time than she would have likely gotten in a kill shelter.

“She couldn’t be touched when she arrived at the dog pound,” Bennett said. “She wanted to be loved, wanted to trust, she just needed a little time. Right now she’s thriving and blossoming in our program.”

Bennett said the county should focus its efforts on holding owners accountable for roaming dogs or “oops litters.” She also called for a volunteer committee of five to seven people from different occupations to discuss the dogs on a case-by-case basis to decide if euthanasia is necessary.

Viviana Perez, who owns a pit bull, said backyard breeding is a problem. She also called for the county to take steps to help people get their animals spayed and neutered.

District 3 Supervisor Chris Howard brought up Measure R, the 1 percent sales tax measure voters approved in 2020 and will be put before voters again for a possible repeal in November. According to Howard, the dollars that tax measure allowed to be allocated to the shelter “changed the dynamics” of the conditions many people spoke about on Tuesday.

“Moving forward, I don’t think this board is going to take the same position (we took) in the past about fixing and repairing things out there,” he said.

Howard also offered encouragement to the sheriff, saying “don’t be afraid; we’re not going to let you down.”

Board Chairman Gerry Hemmingsen praised the volunteers, saying the county has kept from getting to an overwhelming crisis because of them.

“Because of the volunteers and because of the staffing out there, we’ve kept from getting to the overwhelming crisis,” he said. “I’m not saying we’re not in need of a lot of things, because we are. But we haven’t gotten to that crisis state and I have to lay that completely on the shoulders of the volunteers.”