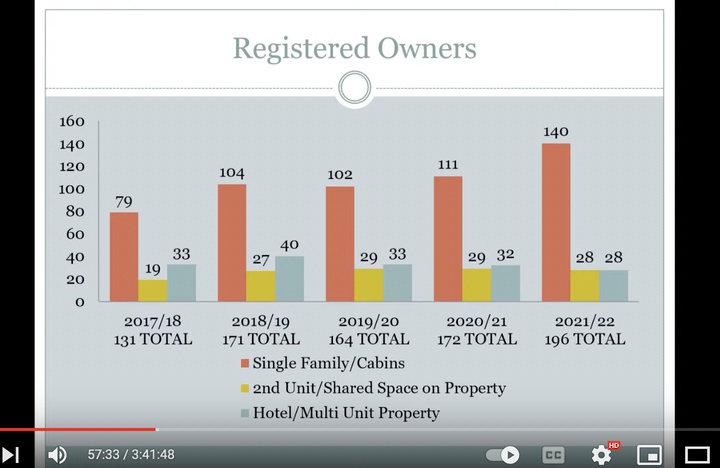 A presentation from Tax Collector Barbara Lopez shows the number of vacation rentals in single-family homes grew by 61 in the last five years.

Del Norte County’s cache of vacation rentals grew from 131 to 196 in the past five years, with the largest increase occurring in single-family homes, according to the tax collector.

But despite acknowledging anecdotal evidence regarding a lack in long-term rentals, after listening to 16 residents — most of whom own an Airbnb or VRBO — four county supervisors said they felt the increase wasn’t a crisis.

Though they said it is important to continue to monitor that increase so it doesn’t grow out of control, supervisors decided against developing regulations for vacation rentals.

“In the last two to five years, I’ve only heard, personally, two complaints,” District 1 Supervisor Darrin Short said, referring to the sole complaint expressed during public comment. “I don’t see this as an alarming situation we need to have staff look into regulating. I’m not in favor of directing staff to do that.”

The number of single-family homes available to tourists in Del Norte County grew from 79 in 2017-18 to 140 in 2021-22, Tax Collector Barbara Lopez told supervisors. This increase appears to be fueling a $424,000 uptick in transiency occupancy tax revenue for the county over the past five years.

Lopez included the number of secondary units and shared bedrooms people were renting out as well as multi-units and hotels available. But, she said, the most significant change over the past five years is the increase in single-family homes available as vacation rentals.

Lopez said her office has software that lets her know when a vacation rental goes live. Owners are required to register their rental with the tax collector’s office, providing with what they think their revenue is going to be along with the first date of occupancy, she said.

Rick Shirley, who moved to Del Norte County from Utah, where he was the director of economic development, said he owns several long-term rentals in the city and the county. He noted that the same economic circumstances are influencing demands in both vacation rentals and long-term rentals.

“The rest of the state’s on fire and paradoxically in drought and flash floods at the same time,” Shirley said. “The crime in cities is completely out of control, rent prices are skyrocketing, people are fed up and people are looking for alternatives. And, guess what, they found Del Norte County; it’s no longer a secret.”

Vacation rentals, he said, fill an important niche in the economic spectrum of housing, bringing in visitors who spend more money, generate tax revenue and “provide positive exposure of Del Norte County to a wider world.”

“I do believe the residents of this county may benefit from some regulations with the goal of protecting the rights of the residents and the quality of life in this county,” Shirley said. “But I also want to make sure we protect the important tourism resource and revenue opportunities they provide.”

Weber, a Crescent City Harbor District commissioner, said his “VRBO/Airbnb-like thing” is his wife’s business and, because they’re retired, how they supplement their income. If vacation rental occupancy drops, he said, they will likely transition their property into a long-term rental for visiting nurses.

“This is not the time to start prohibiting vacation rentals,” he said. “Yes, research is always good. Get as much information as possible and then listen to the market. The more you guys get involved and the more control government asserts over private property, the more problems you create.”

Wortman, who works for Alder Point Real Estate, touched on three arguments against Airbnbs and other vacation rentals — the housing shortage, neighbors’ complaints against the tenants and zoning.

While there is a housing shortage in California, Wortman said that argument doesn’t hold water against vacation rentals since they make up about 1 percent of all housing in the Golden State. As for the bad neighbor argument, Wortman said a resident has no say about who moves into a long-term or month-to-month rental.

The zoning argument doesn’t hold up either, he added.

“Homes are residential because it’s a home — people come in there, they spend the night and eat food and live there with their family,” Wortman said. “That’s the exact same thing that’s happening with Airbnbs and I don’t see any difference whether someone is renting it out for 30 days or 12 months or two years as opposed to renting it out for two or three days at a time.”

“If you go to the beach area and see a house that’s not nice and then you see one with the landscaping done and it has cool decor and it’s painted — everything looks perfect — that’s probably a vacation rental,” he said. “There are houses that people have taken, absolute eye sores and blight, and turned them into really beautiful parts of our city.”

According to Lavonne Powell, it’s their South Bank Road property that prompted their neighbor Vince Tomasich to complain to the Board in August. Occupancy at that home has increased since the Powells bought it seven years ago, and Lavonne Powell said she and her husband will make sure a fence between their home and Tomasich’s home gets built.

However, Powell said, if they weren’t allowed to own vacation rentals it would be financially disastrous for her and her husband.

Tomasich said that while he likes the Powells, vacation rentals are commercial endeavors. The goal is to make money, he said.
Tomasich referred to another home on his street across the Smith River from Ruby Van Deventer Park that had a cesspool, but no septic tank.

“Somebody bought it, fancied it up, put some paint on it and made a vacation rental. Well, all that septic went right into the river,” he said. “You go on vacation, how long you take your shower? It’s not your water, not your water heater. Hell no. Zoning is zoned residential. I think residential should stay residential.”