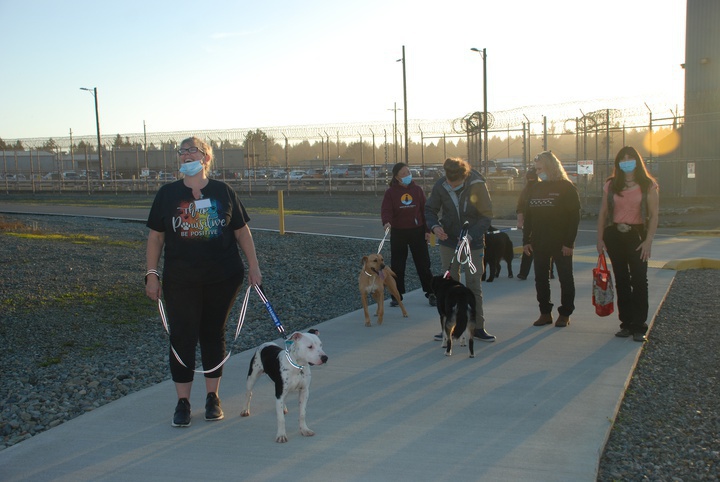 As Del Norte County begins transitioning its Animal Services Division to the sheriff’s office, Supervisor Darrin Short will ask his colleagues to discuss potential changes to the shelter’s euthanasia practices.

The Board of Supervisors on Tuesday will discuss potential revisions to a 2009 resolution stating the county will comply with state law requiring shelters and pounds to find permanent homes for adoptable animals.

Short, who represents Del Norte County District 1, said Monday he felt the need to discuss this resolution after volunteer Laureen Yamakido told him and his colleagues in July that 40 dogs were being housed at the animal shelter.

Short also referred to Yamakido’s statement regarding a site plan for new kennels at the shelter.

“One question I had is, is this making space for additional dogs? That’s a big concern,” Short told the Wild Rivers Outpost. “And I was told, ‘No, the dogs that are kept are brought out to the kennels for exercise and just for people to interact with.’ But here a few weeks ago we heard there were 40 dogs there. That means dogs are living in those kennels. I think we need to discuss that.”

According to Del Norte County’s Resolution No. 09-090, approved Aug. 25, 2009, Del Norte County had “voluntarily and unofficially” adhered to California Penal Code Section 599d and California Food and Agriculture Code Section 17005 since 2008. As a result, the county had reduced the number of dogs euthanized from 43 percent to less than 1 percent.

However, since Yamakido’s statement in July and the board’s decision last month to transition the Animal Services Division away from the Del Norte County Department of Agriculture, Short said he wanted to see what his colleagues thought about the shelter’s current operations.

Short further questioned if modifying that 2009 resolution would make things easier on Del Norte County Sheriff Garrett Scott, who said in August that his department would make the transition work.

“We keep getting hints that things aren’t really functioning well at the ag department,” Short told the Outpost. “I was kind of hoping to not pass off a disaster to the new sheriff. He’s got enough to do.”

As of Monday, the Del Norte County Animal Shelter is housing 27 dogs, Animal Services Director Justin Riggs told the Outpost. Seven dogs are currently being fostered. The county is currently responsible for a total of 34 dogs, he said. The animal shelter’s operating capacity is 24 dogs, Riggs said.

A few weeks ago, nearly 40 dogs were at the shelter, Riggs said. He added that it’s volunteer-led programs like the Prison Paws Partnership and its foster care that helps alleviate the facility’s capacity challenges.

“During the last round we shipped out eight dogs to that program,” he said. “It was the absolute perfect time when we were really bursting at the seams.”

Del Norte County’s Animal Services Division will euthanize animals if it’s medically necessary or if a dog is unpredictably aggressive, though shelter staff only have to do a handful of each a year, Riggs told the Outpost.

In the case of a medical euthanasia, Riggs said that decision is made after he consults with the veterinarian the shelter is working with. They consider the outlook that animal would have after treatment and how that would affect its adoptability, he said.

“We very rarely get dogs in such bad shape that we can’t save them,” Riggs said. “Sometimes if it’s like, maybe an $800 leg surgery we might be looking at, we’ll work with the Humane Society of Del Norte or Born Again Pit Bull Rescue or even through Dogs of Del Norte County to fundraise to help pay for those kinds of things. Sometimes we’ll set up donations with the veterinarian’s office for that.”

The Board of Supervisors’ decision to restructure Animal Services comes as the shelter has experienced a “big uptick” in intakes, Riggs said. He said he thinks that’s a result of the COVID-19 pandemic and demographic changes the community has experienced.

Riggs said he is still the animal services director until the transition to the Del Norte County Sheriff’s Office is finished.

County Administrative Officer Neal Lopez told the Outpost last month that his goal was to complete the transition in November depending on the final budget and contract negotiations with bargaining groups representing county employees.

The Del Norte County Board of Supervisors will meet at 10 a.m. Tuesday in the Flynn Center, 981 H Street in Crescent City. To participate via Zoom, click here.