Though Army Corps Rep Says It'll Work With City, Councilors Call For Public Engagement Ahead of Fencing Off Jetty 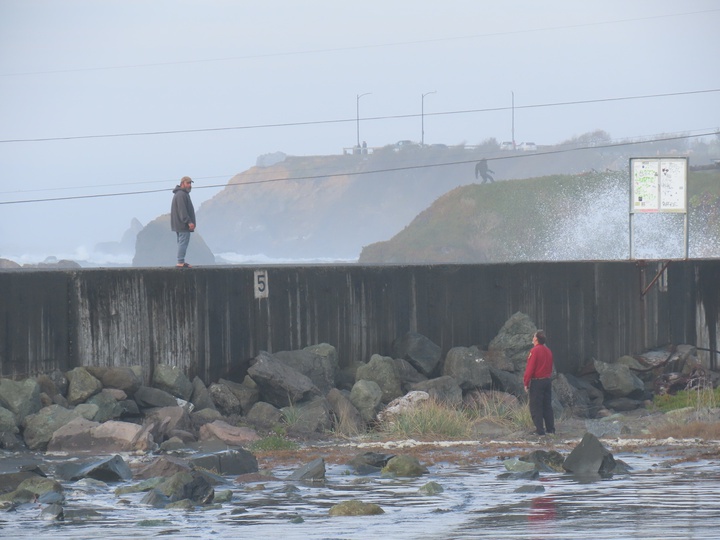 • (VIDEO) Del Norte Emergency Responders to Public: Don't Go On The Jetty, 'It's Not Worth It'

Jere Harper, chief of construction with the Corps’ San Francisco district, said it isn’t outside the realm of possibility to have the area fenced off this summer. But after Harper pointed out that if people really want to get onto the jetty they will, Councilors called for a public engagement campaign.

Still, Crescent City’s police chief — repeating his standing policy that none of his officers are allowed to respond to calls on the jetty — said the city needs to hear from Del Norte County’s Search and Rescue volunteers before erecting any fences.

“They’re going to have to go out there at some point because somebody’s going to scale that fence or get on top of it or whatever,” Chief Richard Griffin told Councilors. “I really implore you to invite them to the table first if we’re starting to talk about putting more stuff up there.”

The Army Corps can work with Crescent City to rehabilitate the existing warning signs on the jetty, Harper said. But trying to fence off the area requires local support, which can be difficult to get, though the city is the agency asking to limit access.

Most jetties aren’t fenced, Harper said. This includes Humboldt Bay’s north jetty, which is controlled by the Bureau of Land Management though it’s on U.S. Coast Guard property. There’s a chain stretched across two bollards to keep vehicles away, but the BLM “was not really interested in cutting off the recreation public from the jetty,” Harper said.

“It’s an individual’s responsibility to not get themselves swept off,” he said, adding that signs that have been at the Humboldt Bay jetty for a year already have bullet holes in them. “If we try to lock the jetties up, the recreational users, especially the fishermen, become very vocal.”

The chainlink fence Harper said the Corps could install would replace the gate that’s already at the start of the jetty. It would also have to go far enough down the jetty so people can’t walk around it. The Corps would have to make those determinations if both it and Crescent City decide that’s how they want to respond, Harper said, but people will still get through.

Crescent City could even control access to the jetty via a locked gate, Harper said, but City Manager Eric Wier said he didn’t want to put the responsibility of deciding whether the ocean is safe on his staff’s shoulders.

Tamera Leighton, executive director of the Del Norte Local Transportation Commission, who lives near the jetty, said at low tide, people can still access the jetty via the Crescent City Harbor from the south. She urged the Army Corps of Engineers to send a representative to the area and said if new signs are installed prohibiting access to the jetty, enforcement is needed.

In the case of other jetties and facilities owned by the Army Corps of Engineers there’s “some sort of a local authority for law enforcement,” but Harper said the agency’s legal counsel would have to do some research to find out what that is.

Currently, it’s not against the law to walk onto the jetty, Griffin pointed out. But, if the Army Corps of Engineers sent a letter to the Crescent City Police Department asking them to keep people from trespassing on the facility, that’s something Griffin’s officers could enforce. He said he still wouldn’t send officers out onto the jetty, however.

“They’ll come in eventually and that’s where we’re going to at least cite them,” Griffin said.

In Crescent City, it’s not only recreational fishermen who try to access the jetty, Griffin pointed out, it’s people walking their dogs, those wanting to exercise as well as larger crowds. He said he argued with a woman in her 70s, a local, who was on the jetty despite Crescent City being under a tsunami advisory due to a volcanic eruption in Tonga last year.

“No matter what you do, people are still have that ‘I’m a local and I know better than you do’ thing,” Griffin said. “On a bright sunny day, I can’t argue against that. But I’m not going to put myself in that position to say, ‘it’s closed today but it’ll be open tomorrow,’ ‘it’s closed from this time to that time.’ I’m not an ocean expert. I don’t do boats. I don’t swim very well.”

Griffin reiterated his request for the Crescent City Council to get Del Norte Search & Rescue involved in its deliberations.

In June 2022, Del Norte Search & Rescue partnered with the city and the Del Norte County Sheriff’s Office to put up new signs and a locked gate at the jetty. According to the sign, Search & Rescue responded to 15 rescues at the jetty, though it stated that three people died after venturing out too far.

Kathy Williams, Del Norte SAR secretary and treasurer, told the Outpost that most people she and her fellow volunteers rescue are from out of town.

In 2021, Del Norte SAR responded to two jetty-related incidents, one of them a fatality involving a 43-year-old Los Angeles man. The second incident involved a Chico couple who sustained severe injuries after they were swept off the jetty in November.

On Tuesday, Councilor Ray Altman questioned the need for a public engagement campaign versus just asking the Army Corps of Engineers to install a chainlink fence by this summer.

“We can get something done or we can maybe have a fence in a couple of years with all these steps you guys have added on,” Altman told his colleagues.

Altman also pointed out that the jetty is where Crescent City launches its 4th of July fireworks.

“Should we talk about that?” He asked. “Or are we going to set an example for no one to be on the jetty?”

Griffin said the contractor that spearheads the fireworks display is under constant supervision from Del Norte Search & Rescue. They set up a 1,500 yard radius around the area where no one is allowed in or out and are ready to respond if there’s an emergency.

Crescent City’s newest councilor, Kelly Schellong, said the discussion about fencing and about installing new signs shouldn’t be made until after the city gets public input. Her colleague, Mayor Pro Tem Blake Inscore also urged representatives from the Army Corps to visit the area and “be part of this discussion in person.”

“They need to walk this jetty,” he said. “We need to ask them to be here and I think we need to establish public engagement at the earliest possible convenience.”