Though Army Corps Rep Says It'll Work With City, Councilors Call For Public Engagement Ahead of Fencing Off Jetty » 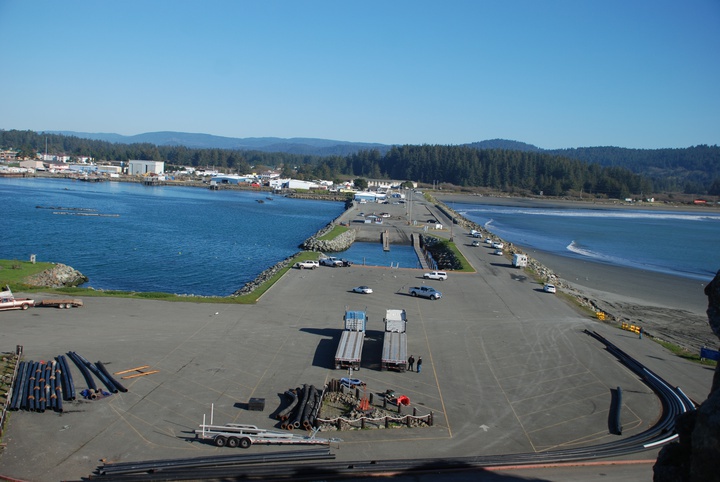 The Crescent City Harbor District will ask the county to declare an emergency, enabling them to pursue state and federal disaster dollars to repair the Whaler Island Groin.

This decision came after Harbormaster Tim Petrick announced Tuesday that the groin has fully failed.

“It’s dropped a solid 6 feet of height this winter,” he told commissioners “And now at high tide, when there’s a swell it rolls right over the top of it and it’s only going to continue to take more rock off.”

A groin, or groyne, is a low wall or barrier built into the sea from a beach to protect a coastline from erosion, according to the Oxford English Dictionary. The Whaler Island Groin was built to protect Anchor Way and the Harbor District’s boat launch.

Petrick said the groin has been degrading since before he began working at the Crescent City Harbor, though it hadn’t changed much in the last two years. The most recent series of storms, along with the king tides, accelerated that degradation in an approximately 100-foot long section of wall.

“I would categorize it as a full repair,” Petrick told the Outpost. “Restoring it to the prior condition will only allow for it to happen again.”

Commissioners voted 4-0-1 in favor of a resolution required to pursue a $750,000 Statewide Ramp Repair and Modification grant through the Division of Boating and Waterways.

Commissioners also agreed to discuss writing a letter to Del Norte County urging officials to declare an emergency. Board President Wes White said the matter would be on the Harbor District’s Feb. 7 agenda.

Petrick said he wasn’t sure if the grant would be the best fit to repair the groin. But the Whaler Island Groin was built with DBW dollars and “we’re just trying to get everything we can,” he said.

Plus, the grant’s goal is to protect public launch ramps, he said.
“We’ve got to make the argument that rebuilding that groin protects (the launch ramp) from destruction from the prevailing seas.”

Commissioner Rick Shepherd, a commercial fisherman gearing up for the Dungeness crab season, was absent.

On Tuesday, Petrick told commissioners that he was exploring the potential for federal and state grants to make repairs to the groin since the damage is storm-related. But, he said, the county needs to declare an emergency.

“As of last week, they hadn’t and we were the only coastal county in California that hadn’t declared an emergency,” he said. “If they get on board with that, I’ve got support from the Congressman and Senator to apply for funding here for repairs to Anchor Way and to the groin as well.”

Harbor District staff is also pursuing grants through the U.S. Army Corps of Engineers and is looking at the other infrastructure-related grants it has received to determine if the funding could be used to repair the Whaler Island Groin.

This includes a $7.36 million federal Port Infrastructure Development Grant program the Crescent City Harbor District received to rebuild the sea wall near Citizens Dock. Petrick noted the equipment to rebuild that sea wall is the same needed to repair the groin.

“I think there’s going to be enough work to keep them busy for enough time,” he told commissioners. “The boat launch is safe right now. I would say that if we have a heavy swell later this week … we’ve got king tides later this week that are (going to be) 8.7 and if we got a big swell on top of that, we’ll shut down Anchor Way to public access.”