(VIDEO) Del Norte Emergency Responders to Public: Don't Go On The Jetty, 'It's Not Worth It'

It’s a warning that one couple didn’t receive on Saturday. In a video shot by Crescent City resident Jeremy Murphy, a man and a woman are walking along the jetty with waves crashing over them. Luckily, they weren’t swept into the water or onto the rocks.

A week before that, three or four people had ventured past the danger signs and the locked gate were trapped by the waves and had to sprint to get back to safety, Griffin said. One of them had kids in strollers, he said.

“I wanted to remind the public, even if you lived here all your life for 50 years and you’ve fished out there, on a bad weather day, don’t go out there,” Griffin said. “Period. It’s not worth it.”

Though the jetty is within city limits, Crescent City Police officers don’t go out on the jetty. They’re not trained for it and they don’t have the equipment, Griffin said.

“Already we had an officer swept off there who ended up with a broken ankle,” he said, adding that the jetty is owned by the U.S. Army Corps of Engineers.

Last year, 43-year-old Reuben Cha, of Los Angeles, was pronounced dead after he was retrieved from the water between the jetty and the B Street pier, though there were conflicting reports of whether Cha had been on the jetty or had walked into the water from the beach, then-sheriff Randy Waltz told the Outpost in October 2021. 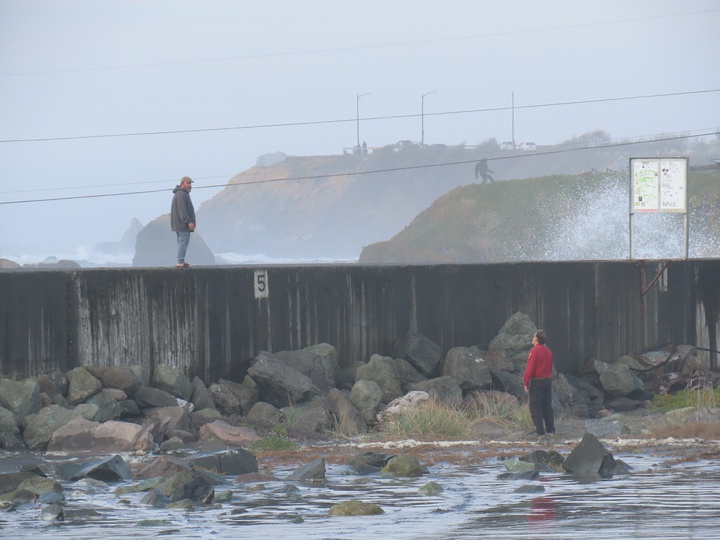 In November 2021, a Chico couple sustained severe injuries, including a fractured vertebrae and broken ribs, after they were swept from the jetty.

In June 2022, Search & Rescue, the DNSO, CCPD and Crescent City partnered to put new signs up on the jetty along with a locked gate. According to the sign, Search & Rescue responded to 15 rescues at the jetty. The sign also states three people died after venturing out onto the jetty.

Kathy Williams, Del Norte SAR secretary and treasurer, said she has an email to Cindy Vosburg, executive director of the Crescent City-Del Norte County Chamber of Commerce about the jetty.

“One of our goals is to work with them to get better info about the jetty to the motels,” Williams told the Outpost. “Most of our rescues and recoveries involve people from out of town.”

According to Griffin, because the U.S. Army Corps of Engineers owns the jetty, it would be up to that agency to shut it down and request CCPD to enforce a no trespassing rule. But on a great day, it’s a pleasant walk and many long-time residents often go fishing there, he said.

That begs the question — should the jetty be shut down entirely or just during bad weather? If it isn’t shut down, is the city or the U.S. Army Corps liable if someone is injured or worse?

“There has been some discussions and I think it needs to be explored further, but there’s currently nothing we can cite somebody on,” Griffin told the Outpost, adding that his officers are often the first to respond and can help direct SAR volunteers and locate individuals. 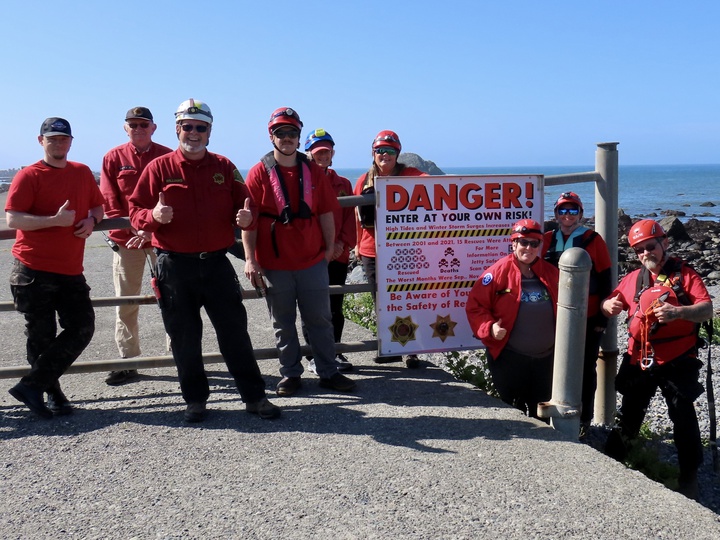 Del Norte Search & Rescue volunteers pose with one of the new signs they worked with the city to order. | Photo courtesy of Kathy Williams

Griffin said he’s finalizing the purchase of a drone that can be used during jetty rescues.

According to Williams, there have been a handful of incidents at the jetty, though “nothing major.” Her husband, John Williams, often chases people away from the jetty.

John and several other SAR volunteers hung around the jetty during the Thanksgiving holiday as a deterrent, Kathy Williams said.

When asked what a jetty rescue costs, Williams said she’s not sure. However, what with the man hours required to train, repair damaged equipment and to conduct rescues; the specialized equipment, including personal flotation devices and jetty kits to hook into safety lines, replacement safety lines, bolts, glue and carabiners; plus the cost for other agencies to respond, it’s significant.

“We are the only agency that is trained specifically for rescues from the jetty,” Kathy Williams said. “We are volunteers, but we should be charged at a starting deputy wage.”