Yurok Tribal Court Will Use Grant to Hire MMIP Investigator » 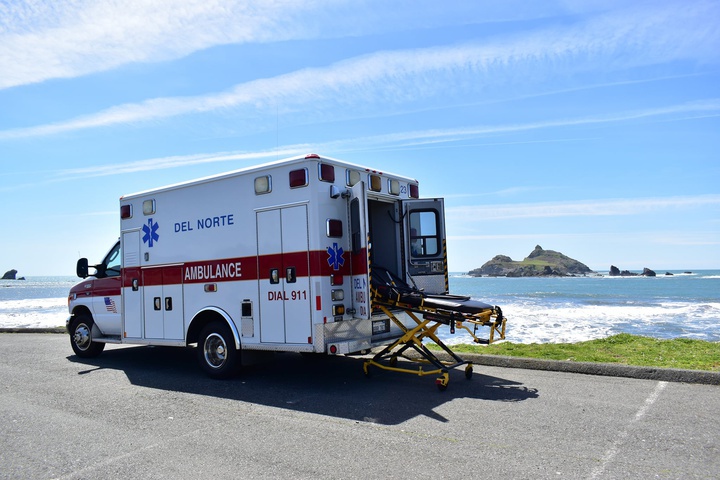 After receiving a last-minute letter of opposition from local fire chiefs, three county supervisors on Tuesday rejected Del Norte Ambulance’s bid to have sole operating rights as an emergency medical service provider in the county.

The Board of Supervisors voted 3-2 in favor of the competitive process to solicit bids from other ambulance providers, possibly including Del Norte Ambulance.

It’s a process North Coast Emergency Medical Services, the joint powers authority serving Del Norte, Humboldt and Lake counties, will have to repeat, typically every five to 10 years, according to EndPoint EMS consultant Nancy Lapolla. Establishing exclusivity via California’s grandfathering provision will no longer be an option for Del Norte County, she said.

Wilson, who is the county’s former sheriff, insisted that county dispatch has the information Howard is seeking, which includes how long it takes for an ambulance to arrive at the scene of an emergency and when they're able to stand down.

“All that data is in our system. It’s retrievable. It’s searchable,” he said, adding that grandfathering Del Norte Ambulance into an exclusive operating agreement would provide additional data. “The data is there and it’s been there for years.”

The Board chose to go the competitive route after the Del Norte Fire Chief’s Association criticized inconsistencies in the service Del Norte Ambulance provides. This includes extended estimated time of arrivals and a lack of available ambulance coverage, according to a letter that was signed by all Del Norte County fire chiefs and sent to supervisors on Monday.

“Although we stand as a unified team when responding to emergencies, we believe the community deserves a much more consistent service that not only meets community standards and contractual obligations, but also exceeds all public stakeholder expectations,” the Del Norte Fire Chief’s Association states. “Currently, as well as historically, these inconsistencies have not been resolved. As the group of fire chiefs that represent all the volunteer fire departments in the county, we emphatically recommend there be no granting of an EOA to Del Norte Ambulance.”

Borges said he had spoken with Del Norte Ambulance representatives, who told him their EMTs have a minute to respond to 911 calls during the day and two minutes to respond between 9 p.m. and 7 a.m. Borges said he received documents and spreadsheets from the ambulance company showing they were meeting those times "without any concern."

However, during a sleeper shift at one of the local fire departments, Borges said he spent about 12 hours listening to the scanner. Del Norte Ambulance was toned out for six calls and out of those six, met their targeted time only once.

Thinking it might be a fluke night, Borges decided to monitor the radio for another 12 hours. Del Norte Ambulance was toned out for eight calls and only met their target twice, Borges said.

“Now they were all within 20-30 seconds above the targeted amount, which doesn’t sound like much, although when lives are at stake every second counts,” Borges told his colleagues. “My issue is on the report I received it states, ‘We meet that almost every single time.’ In a 12-hour night shift I did we got it at 22 percent of the time. I’m curious as to how I can look at the data I was provided and feel comfortable with granting this exclusive operating area if the contract is not met at least during that window?”

Under California Health and Safety Code 1797.200, emergency medical service providers can forego seeking competitive bids for an exclusive operating agreement if they’ve been in continual operation since 1981.

Del Norte Ambulance, which has been operating since the 1970s, is already the only ambulance service responding to 911 calls in the community.

North Coast EMS has determined Del Norte Ambulance is eligible to be grandfathered into an exclusive operating agreement.

If the Board of Supervisors had endorsed Del Norte Ambulance’s efforts to be grandfathered into an exclusive operating agreement, North Coast EMS staff would develop a transportation plan the regional JPA would have to approve.

Sandler acknowledged that the ordinance needed to be updated. An exclusive operating agreement would give the ambulance company room to improve without worrying about competition from another provider, he said.

“For us to be able to continue for the next five years or 10 years, we need to know we have stability,” he said. “A stripped ambulance with nothing in it is $90,000. I got to make sure I can pay that and pay my employees.”

According to North Coast EMS Director Larry Karsteadt, the transportation plan his agency would draft for Del Norte Ambulance would establish a monitoring criteria and would be more robust than the contract the ambulance company had with the county previously. A way to measure response times and whether they’re meeting requirements could be built into Del Norte Ambulance’s exclusive operating agreement, he said.

Karsteadt said North Coast EMS favored the grandfathering process. It’s not prepared, nor was it planning, to do a competitive bid, he said.

“It’s far more complicated and it gets us to the very same place,” Karsteadt said. “If there is a failure to comply (with the exclusive operating agreement), we remove the grandfathered EOA and we could go out to bid. That’s what we would recommend to this Board and to our governing board.”

Howard reiterated his statement that more statistical data is needed. He referred to a contract that Del Norte Ambulance has with MetroWest, Oregon’s largest EMS provider, for dispatch services, saying he wanted to see if its response times had improved.

Howard said he’d also like to look at Del Norte Ambulance’s contract with the county — though it’s expired — to see if there’s data from dispatch. He noted that the report an ad-hoc committee that included his colleagues, Darrin Short and Valerie Starkey, consisted mostly of anecdotal data.

Howard asked if the concerns the Fire Chief’s Association could be addressed in a grandfathered exclusive operating agreement with Del Norte Ambulance. He also asked how difficult it would be for the county’s information technology department to work with county dispatch to compile that data.

“I think there’s another way for us to approach us and get at some of the issues that have been brought to us anecdotally by our first responders,” he said. “I personally am not willing to take that step with this community partner without at least some way for us to help correct the anecdotal information we are receiving as a Board to allow them to perform better if that’s truly the case. And I don’t know how to get there.”

Short, who is now the chair of the Board of Supervisors, accused Howard of ignoring the fire chief’s concerns because it’s not statistical data. He noted that former Crescent Fire & Rescue Chief Bill Gillespie had the same concerns as his successor, Kevin Carey, whose name was included in Monday’s letter to the Board.

“I think to discount that piece of information just because it’s anecdotal is doing a disservice to the people in the county, these first responders,” Short said. “To discount that piece of information coming from all of these people, when they are the ones witnessing the care that is given to the people of this county that are in need is something that is screaming to me that is a problem that needs to be addressed.”