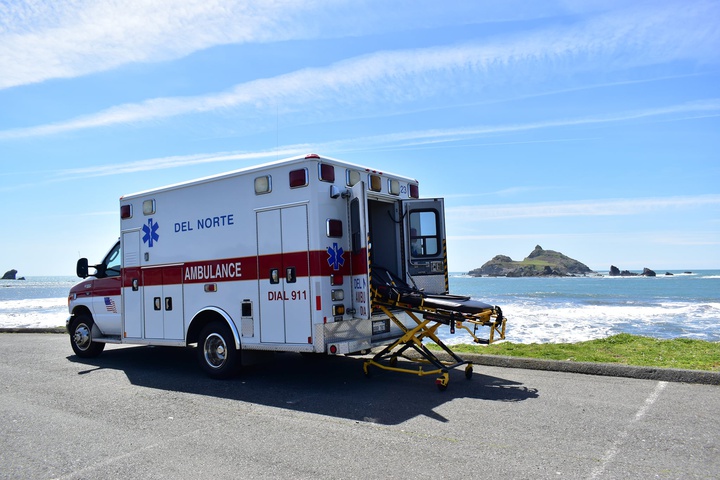 A partnership between Del Norte Ambulance and MetroWest has already led to updated equipment, easier access to training and education and a regional pool of paramedics to tap into should local responders be unavailable.

The relationship will also lead to a change Del Norte Ambulance owner Ron Sandler says he’s been wanting to make for 20 years — transitioning emergency medical dispatch away from the local system to one operated by Bay Cities Ambulance, based in Coos Bay, Oregon.

“People won’t see much of a change at all,” Sandler told the Wild Rivers Outpost on Thursday. “About the only thing is they’ll be talking to somebody who will have time to sit there with them and walk them through every step until first arrivers get on scene, whether it be fire, law enforcement or us. They’ll be able to sit with that person and make sure they’re getting the proper medical instruction started.”

Though a date hasn’t been set yet, transitioning to an emergency medical dispatch system operated through Bay Cities Ambulance will mean less traffic on the local system that’s operated through the Del Norte County Sheriff’s Office, Pritchett said.

According to Pritchett, in an emergency people will call 911, local dispatch will pick up the phone and if they need an ambulance patch them through to Bay Cities.

“There shouldn’t be any delay in time,” Pritchett said. “And what’s really nice is that each ambulance call generates for dispatch about six transmission. With this new system, they’re going to get the call, hit the button and they don’t have to say anything anymore. It’ll take about 24,000 transmissions out of the system and that’s going to make it a lot easier for the dispatchers, for fire, for law enforcement — for everybody.”

Though they won’t be relaying further information to Del Norte Ambulance, local dispatch will still listen in on the call, Pritchett said. They will continue to serve as backup in case “we can't get hold of Bay Cities,” he said.

“We’ve been working closely with the sheriff on this,” Pritchett said. “He’s very supportive of this move.”

A date has yet to be set for when this change will take place. According to Sandler, the partnership needs approval from North Coast Emergency Medical Services, a joint powers authority that oversees emergency medical services in Del Norte, Humboldt and Lake counties.

“If something does fail, we have a redundant system on top of another redundant system with multiple backups if one should fail in a major disaster,” he said. “The system still keeps up and running and we can still get to people right away and take care of them.”

Since it began partnering with MetroWest, Del Norte Ambulance has added a wheelchair van to its services that makes roughly 80 trips a month taking people to medical appointments such as dialysis and oncology treatments, Pritchett said.

MetroWest has also teamed up with Del Norte Ambulance to tie its EMTs in with a national paramedic training program, Pritchett said. This move saves those who want to become an EMT Paramedic a trip to the College of the Redwoods campus in Eureka, he said.

When Del Norte Ambulance was impacted by COVID-19, its partnership with MetroWest kicked in, Pritchett said.

“At one point, three of our paramedics were out and it looked pretty grim,” he said. “But because of our relationship with MetroWest, they were able to send down paramedics from Roseburg to work for a long weekend until we were able to get back those folks. So our community had no reduction in service.”

According to Sandler, the change over to the new emergency medical dispatch system through Bay Cities will not happen over night.

“We will start with wheelchair van and long-distance transports first. Then expand to non-emergent calls before finally implementing the complete service,” he told supervisors. “But once full in place and operating, Del Norte Ambulance will have a system that better uses its resources while reducing stress on local dispatchers and provides added value to the community.”