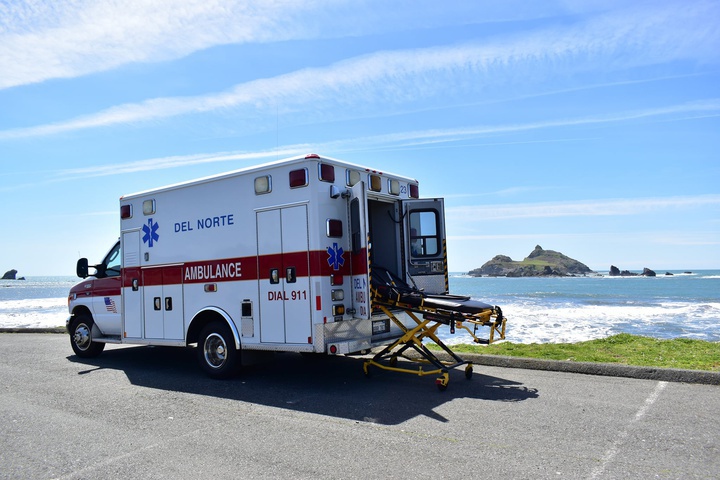 County supervisors withheld an endorsement of Del Norte Ambulance’s efforts to obtain an exclusive operating agreement until an ad-hoc committee could return with statistical data in addition to the anecdotal information provided about the company’s performance.

“When we sat down and had this original conversation with the board, my hope, at least as a scientist, is we would have some data. We would have something hard and concrete with which to make sound determinations and judgments,” Howard told his colleagues Darrin Short and Valerie Starkey who made up the ad-hoc. “We’ve anecdotally in this report (about) response times or ambulance services being away. We’ve heard in this report that this happened, but I’ve got literally no data in which to make judgment decisions today.”

“From the start we felt we may not get a chance to speak to the committee to answer questions about EMS and ambulance services in Del Norte county or get a chance to even clear up some misinformation or miscommunications, and definitely not a chance to talk about the good things we’ve done for our community or our first responders,” Sandler told supervisors.

In the 1970s, Del Norte County had poor ambulance services consisting of “fly-by-night organizations,” Sandler said, prompting it to issue an ordinance ensuring providers didn’t just “pop in and out as they chose.”

That ordinance was removed from the county code, Sandler said, leaving the contract the county has with Del Norte Ambulance as the only way to ensure everyone receives ambulance services. An exclusive operating agreement would prevent poor service from returning to the community, Sandler argued.

“Grandfathering an EOA is the safest and easiest way to ensure a stable EMS system with the highest standards and level of oversight, rate controls, checks and balances,” he said.

Starkey, however, told Sandler that Del Norte Ambulance representatives were given a chance to respond to the report. She said she had an email sent to the company’s general manager, John Pritchett, and its operations manager, Charles Tweed, inviting Del Norte Ambulance to “be part of the entire process.”

“We invited you to provide us with a list of questions that we would be asking as well as who you wanted to include for us to be interviewing,” Starkey said.

In March, Starkey and Short agreed to be on an ad-hoc committee tasked with gathering objective information about Del Norte Ambulance’s performance after North Coast EMS sought input from elected officials on whether it should grant exclusivity to the ambulance company.

If the Del Norte County Board of Supervisors endorses Del Norte Ambulance’s request, that recommendation is forwarded to North Coast EMS, which would develop a transportation plan that its board would have to approve.

According to North Coast EMS director, Larry Karsteadt, the competitive EOA process would require the joint powers authority to issue a request for proposals, a process that could cost about $150,000 to launch. If Del Norte Ambulance were grandfathered into an EOA, it would pay an annual fee of $5,000 to monitor its performance.

Karsteadt referred to a similar EOA process in Humboldt County involving Arcata Mad River Ambulance and City Ambulance in Eureka. This, he said, resulted in a more stable EMS service in those areas.

“Public transparency is far more rigorous — the measurement criteria pursuant to that is approved by our governing board and by the state EMS transportation authority’s transportation plan,” Karsteadt told Del Norte supervisors. “This includes response time standards and other performance standards involving disaster response. If another provider did come in and start operating a business as a ground ambulance provider, I believe the situation would lead to huge instability. One of the benefits (of an EOA) is to ensure stability.”

According to the committee’s report, first responders, particularly firefighters, were the most critical of Del Norte Ambulance’s performance. Criticisms ranged from company EMTs and paramedics appearing disheveled and “not moving with purpose” to them not using sterile bandages. Firefighters also criticized Del Norte Ambulance’s response times and failure to replace equipment or supplies and could make specific examples to support their claims, according to the report.

Fire departments were also concerned that long distance transfers could take an advanced life support ambulance away from the community, stating that Del Norte Ambulance does not “staff up another unit to take its place.”

“As of right now, I would not be comfortable with giving an endorsement to DNA,” Gillespie stated. “But, if over the next two years that criteria is met and maintained, it could serve as a trial period to make sure the community is not getting mediocre service. (DNA) is not quite there yet.”

Among the private citizens Starkey and Short consulted, including Eckart and Scott, Del Norte Ambulance received favorable reviews. Eckart said she appreciated Del Norte Ambulance’s willingness to plan it schedule out “months ahead of time” to coordinate with sporting events.

Scott, who was the emergency services manager during much of the COVID-19 pandemic, said Del Norte Ambulance was very responsive.

“(Scott) stated that when ‘you asked DNA for support, they were there,’” the report stated.

On Tuesday, Kevin Carey, Gillespie’s successor at Crescent Fire and Rescue, suggested the county offer a trial period of one to two years to examine whether or not Del Norte Ambulance is meeting its contractural obligations consistently and thoroughly. Though Carey has only been the fire chief for about a month, he said he has 20 years of experience in emergency medical services.

“In no way does this reflect any relationship issues or anything with Del Norte Ambulance,” Carey said. “We’re proud to stand with them and work hard each and every day to get a better product out to the community.”

North Coast EMS is also required by the state to have a quality improvement system, Karsteadt said.

“That’s to ensure quality patient care to allow data measurement of different factors — response times, number of runs, response times, patterns and so on,” he said. “It starts at the lowest level. If Del Norte Ambulance as an example, or any advanced life support provider in the region, perceived an issue with an individual, they can review that through their internal quality review processes. If it rises above that, they can work with the base hospital, in this case Sutter Coast Hospital. Del Norte Ambulance is assigned to them and they have extensive quality review and oversight responsibilities. And then North Coast EMS oversees the whole process, it’s one of our major responsibilities.”

When Hemmingsen asked how Del Norte Ambulance stacked up against other ambulance providers in the region, Karsteadt the company did resolve a handful of issues over the past few years, but their quality improvement capabilities have improved dramatically.

“I think Del Norte Ambulance, let’s say in the past five years — it’s fairly rare we get any complaints, by the way — I’m going to say in that period, we’ve had maybe five,” Karsteadt said. “That’s a little more than some of our other providers, but it varies with the provider and it varies with the conditions, so it’s not that unusual. And the good news, in my opinion as I said before, Del Norte Ambulance resolved all those issues fairly quickly and responsively.”

Following the discussion, both Hemmingsen and Starkey said they were “leaning toward exclusivity.” However, Starkey suggested giving her and Short more time to gather statistical data in addition to the anecdotal information they gathered.

Hemmingsen also suggested that Starkey and Short work with county administrators and Del Norte Ambulance representatives to go over the company’s existing contract with the county “to see where we want to tweak it.”

“I think this could be beneficial for everyone involved,” Hemmingsen said of an EOA with Del Norte Ambulance.