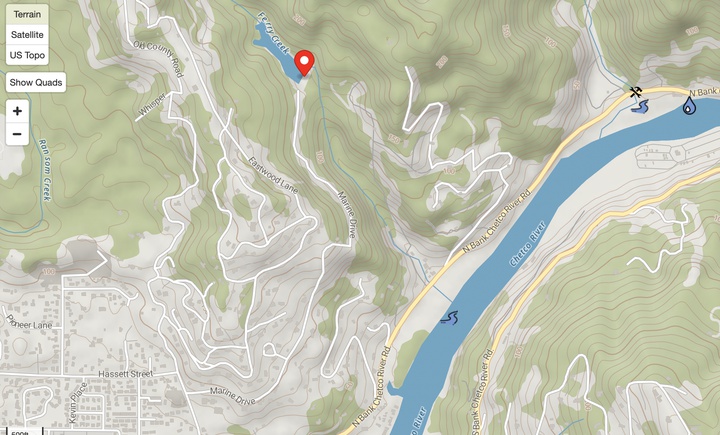 Ferry Creek Dam houses what was once Brookings' source of water. It's now considered hazardous by the state. | Map from OpenStreetMap Contributors

The Brookings City Council on Monday will discuss the future of Ferry Creek Dam, once a major component of the city’s original water system, which the state now considers hazardous to downstream property owners.

City staff is asking for direction to either proceed with a plan to remove the dam or restore it and develop the Ferry Creek Reservoir as a redundant water source.

However, the purpose of the workshop is to inform Councilors about the dam’s status, according to City Manager Pro Tem Gary Milliman. Any proposed action will come before the City Council at a future meeting, he told the Wild Rivers Outpost.

“This is kind of a part of history that has stayed with us and the city has struggled over the years with what to do — whether to try to preserve it as a secondary water source or remove it,” Milliman said of the dam. “When I first came to work for the city back in 2007 it was also a topic of discussion. One of the first things I looked at then was we’re spending money to maintain a reservoir that we don’t use. Perhaps we can find some funding to remove it.”

The decision to discuss Ferry Creek Dam comes after the Oregon Water Resources Department sent the Public Works Director Tony Baron a letter in June stating that the dam has major safety issues and is in “unsatisfactory condition.”

In his letter, Senior Dam Safety Engineer Keith Mills said his team observed the formation of a gully on the downstream side of the 45-foot high earthen dam, indicating an overtopping event, which could result in damage or a catastrophic failure of the dam.

Mills also said the dam's concrete-lined spillway was deteriorating due to uphill slope movement. The spillway approach channel is also overgrown with cattails, which reduces its ability to handle flood flows, Mills said.

Though the Ferry Creek Reservoir and dam is part of the city’s original water system, dating back to about 1915, Milliman said, the reservoir hasn’t been used since 1980. It wasn’t producing a sufficient water supply and there were issues with maintaining the facility and sending the water into town, he said.

When the city secured expanded rights to the Chetco River, its current water source, it abandoned the Ferry Creek Reservoir, Milliman said. The only use the reservoir has seen since then is from the Oregon Department of Fish and Wildlife, which used it to help salmon acclimate to the river, he said.

According to the city’s staff report, the Oregon Water Resources Department designated the dam a high hazard in 2015 due to the likelihood of failure and potential impacts to landowners downstream. OWRD hired River Design Group, which developed a dam removal plan as well as a cost estimate for removing the dam.

In 2018, the city hired The Dyer Partnership Engineers & Planners Inc. to create a feasibility study focusing on the Ferry Creek Dam. The document explored five alternatives including taking no action and complete dam removal, which is expected to cost about $2.9 million, according to the city’s staff report.

A fifth alternative included in Dyer’s study was removing the existing dam and building a roller compacted concrete dam, which has an estimated cost of $11 million to $16 million.

According to the city’s staff report, the Dyer Feasibility Study recommended realigning and expanding the dam and relocating the spillway. That project would have provided redundancy in the city’s water system and nearly one mile of fish habitat along Ferry Creek.

However, in 2018 staff recommended taking no action until federal dollars were available to help with the project due to its cost.

According to Milliman, about a year later the state inspected the dam and now considers it to be a risk. “That’s what prompted us to take a look at what to do with the facility,” he said.

“There may be some funding sources out there that we haven’t started looking at,” he told the Outpost.

Other items on the Council’s workshop agenda Monday include updates to the city’s sound ordinance. The workshop will take place at 4 p.m. Monday at Brookings City Hall, 888 Elk Drive. For more information, visit www.brookings.or.us.