HORSE WAR RAGES ON: Curry County Commissioner Claps Back Against Man Who Believes Deeply in the Firefighting Capabilities of Wild Horses » 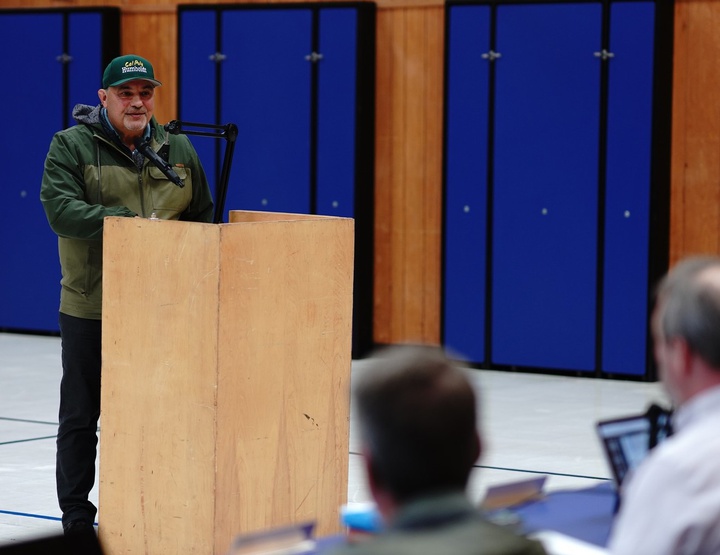 Jim McQuillen, the Yurok Tribe's education director, tells the DNUSD Board of Trustees about the tribe's hopes after winning a $30 million Promise Neighborhood Grant. | Courtesy of DNUSD

A year after the Yurok Tribe, Del Norte Unified School District and other local partners successfully won a $30 million U.S. Department of Education Promise Neighborhood Grant, district officials announced the schools that would benefit from those dollars first.

The Yurok Tribe will grant DNUSD a total of roughly $5.2 million over the course of the five-year grant, Kissinger said.

“We identified a wide range of services and resources meant to primarily support Naive American students, but that can serve all students in our school district,” he told the DNUSD Board of Trustees on Thursday. “Some people may ask, ‘What about the other schools?’ Other schools will be served too, but the focus is on these schools.”

Trustees unanimously approved the Promise Neighborhood grant contract with the Yurok Tribe at its first meeting at Margaret Keating Elementary School in Klamath since before the COVID-19 pandemic.

The Yurok Tribal Council approved a similar contract last week, according to Kissinger.

The Yurok Tribe is the only tribal government to receive a U.S. Department of Education Promise Neighborhood Grant, according to Jim McQuillen, the tribe’s education director. In addition to partnering with DNUSD, the tribe partnered with True North Organizing Network, the North Coast Indian Development Council, Del Norte Child Care Council and First 5 Del Norte to win the grant.

According to Josh Norris, the Yurok Tribe’s Klamath Promise Neighborhood director, the tribe’s goal is to provide a “Cradle-to-Career program.” In addition to supporting programs at DNUSD, the tribe is using its grant dollars to fund the Del Norte Child Care Council, First 5 Del Norte and the Family Resource Center of the Redwoods — focusing on early childhood education.

Some of those dollars will be spent on bridge programs, recreation programs, school and community gardens and “a lot of other things that have to do with health,” Norris said.

Norris said the Klamath Promise Neighborhood Program is data-driven. The tribe’s collaboration includes partnering with Cal Poly Humboldt’s California Center for Rural Policy (CCRP) to evaluate how the grant is being used.

In Klamath, there will be both a family liaison and a Klamath coordinator to help parents connect to the resources available to them, Norris said. The tribe will also provide tutoring and career technical education counseling as well as counselors and mental health care providers in the school system itself.

“What I’ve seen in other Promise Neighborhoods is they have these family resource centers where folks come together and collaborate,” Norris said, adding that the tribe will bring guest speakers and teachers to Klamath’s local school. “We’re starting that in Room 2 at Margaret Keating where parents can come in and interact with teachers, with staff and can really contribute to the school in the way they want to. There’s going to be more folks here on campus to assist with things like hallway monitoring and recess and all kinds of things as well as providing higher quality education.”

Yurok Tribal Counselor Phillip Williams, who is also seeking the Trustee Area 5 seat on the DNUSD Board, took issue with Kissinger’s description that the Promise Neighborhood grant dollars will primarily support Native American students. The grant will support all students in the district, Williams said, including its Hmong and Hispanic students as well as those at under performing schools.

According to Williams, getting the entire Tribal Council to approve the contract with DNUSD was a heavy lift for himself and his colleague, Councilman Ryan Ray, who represents the Requa district, because it only serves two of the seven districts that are in Yurok Tribal territory.

Data collection is an important component of the Promise Neighborhood grant, McQuillen said. The Yurok Tribal Council wants reports on the progress it’s making such as whether students’ test scores are increasing, if graduation rates have gotten better and what the overall impact of the grant will be, he said.

McQuillen also issued a challenge to DNUSD officials — to increase the district’s minimum wage in an effort to recruit more classified staff.

“One of the problems that we’re having at the Yurok Tribe, and in the district, is recruitment and trying to hire people,” he said. “Something the Yurok Tribe recently did was increase our minimum wage by a couple of bucks. I challenge the district to consider the same thing.”

Chrystal Helton, a parent of three with one student attending Margaret Keating, echoed McQuillen’s challenge. While the Promise Neighborhood Grant is great for everyone, she’s worried that with the low salary schedule for classified staff having the grant may be a missed opportunity.

“It’s sad you expect people to survive on these wages especially when they’re on the ground working with kids,” she said. “We can’t compete with the tribe. They’re at a $17-an-hour minimum wage. We cannot compete with that. My only real concern is we’re not going too ee what we could because we can’t get the staff we need.”