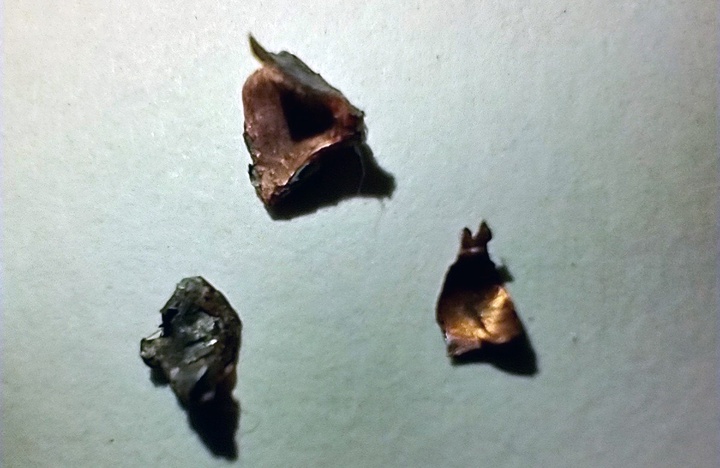 Lead bullet fragments were pulled from a fist-sized piece of elk meat left behind by poachers. | Photo courtesy of Kyle Max

On Saturday, November 12, the Northern California Condor Restoration Program performed x-rays on two elk that were illegally killed in an area frequented by the recently released condors. One of the carcasses contained enough lead to kill several condors.

“This is about as close as you can get to a worst-case scenario. If the carcasses weren’t quickly reported, and our free-flying condors accessed them, it is very likely that one or more of the condors would have consumed a life-threatening quantity of lead,” said NCCRP Manager and Yurok Wildlife Department Manager Chris West, who has more than two decades of condor management experience. “The risk this incident presented to the condors cannot be understated, since at least four of our recently released condors were less than a 10-minute flight from the poaching event at the time that it occurred.”

“Based on the circumstances, we’re lucky we didn’t have to transport condors for treatment or lose a bird to lead poisoning,” said Yurok Wildlife Department Director Tiana Williams-Claussen. “Lead is by far the single biggest threat to condors in the wild.”

“We are so fortunate that we did not lose one or more members of the new condor population,” added Redwood National and State Parks Superintendent Steven Mietz.  “We are doing everything possible to find the people who illegally killed the elk and put the new condor population at risk. If you have any information that might help us hold those responsible for this illegal act accountable, please contact the park or the California Department of Fish and Wildlife.”

Officers with Redwood National and State Parks and the California Department of Fish and Wildlife are investigating the incident and ask for the public’s assistance in this case. Investigating officers are urging anyone with any information to call either NPS Ranger Attendorn at 707 465 7789 or Game Warden Castillo at 707-673-3678. To anonymously make a report, please call CDFW’s CalTip at 1-888-334-CalTIP (888 334-2258) or call the park’s anonymous crime tip line at 707 765 7353

Several lead fragments, including the bulk of the lead ammunition round, were found in the neck of one of the cow elk and within a fist-sized chunk of meat presumably dropped by the poachers at the site. All meat containing lead was removed from the site. Additionally, approximately 40 pounds of consumable meat were left on each animal.

Lead is the leading cause of condor mortality. Since the critically endangered avian scavengers were first reintroduced in 1992, more than half of all condor fatalities have been linked to the ingestion of lead fragments from consumed animals shot with lead ammunition.

When an animal is shot with a lead bullet, much of projectile breaks apart upon impact and continues to fragment as it travels through muscle, bone, and organ tissue. Hundreds of lead particles, ranging from the size of a fingernail to a speck of dust, may travel more than one foot from the wound channel. For this reason, small metal fragments frequently spread broadly through meat and viscera of lead-shot animals. In Southern California, many healthy condors have expired after eating one lead-tainted meal.

Condors only consume decomposing animal tissue or carrion. The large vultures normally ingest small bones in the carrion, along with dirt, pine needles and other natural yet undigestible debris. Similar to owls, condors have a way to caste or “cough up” most of the undigestible bits. But often this does not happen with lead. When a condor consumes carrion containing lead fragments, an early side effect of lead toxicosis, or lead poisoning, is paralysis of the gastrointestinal tract. As a result, the heavy metal stays in the tract where strong acids continue to release highly toxic lead particles into the condor’s bloodstream. With each meal, the toxic metal is exposed to more digestive acid and greater quantities of the poison enter the bird’s vital organs, muscle, and skeleton. In general, when a condor consumes lead fragments, the bird will experience a series of worsening symptoms that often unfold over the course of days and weeks and lead to an excruciating death.

The first visible sign of lead poisoning is disorientation and lethargy. The bird’s immune system will also be diminished at this stage. If the condor does not receive medical treatment, it will be at higher risk of predation, in-flight collisions and other life-threatening incidents. Any of these are far less agonizing than what follows. Next, the toxin causes the bird’s crop to stop functioning, which is known as crop stasis. Located above the stomach, the crop is a thinly walled pouch that is used to store up to three pounds of carrion for later digestion. Any decaying meat in the paralyzed crop quickly begins to discharge an entirely different set of potentially lethal toxins, including one that can burn though the skin pouch. While normally able to regurgitate as needed, crop stasis prohibits expelling the tainted meat. The condor will begin to experience dehydration and starvation, but cannot eat or drink due to the constriction in its crop. If not consumed by a predator, the compromised bird eventually succumbs to dehydration, starvation, or diseases that would not harm a healthy bird.

“Every condor is critical and sacred. Older condors teach younger birds how to make it in the wild. When a condor dies prematurely from lead poisoning, all of the knowledge it amassed throughout its life, such as where to find forage or safely roost for the night, is lost and won’t be transmitted to the next generation. This transmission of knowledge is essential to the health of our condor population,” said Williams-Claussen. “In order to conserve the species, it’s critical to transition to non-lead ammunition, which is high performing and viable as a harvest tool.”

Performing the necessary x-rays to remove tainted meat from the field takes a lot of time and money that should be spent on other high priority condor management actions.

In May, the NCCRP released the first condor to soar over Northern California’s iconic redwoods in more than a century. In the last six months, the program has released seven additional birds. The program plans to release a group of birds every year for the next two decades or longer. Prior to the May reintroduction, the program developed agreements with the Sequoia Park, Oregon, and Oakland Zoos to provide treatment to condors sickened by lead because it is such a serious threat.

The NCCRP is a collaboration between the Yurok Tribe and Redwood National and State Parks.

For more information on the impacts of use of lead, and transitioning to non-lead ammunition, please visit https://huntingwithnonlead.org/