New Elevated Walkway Through Grove of Titans Opens to the Public 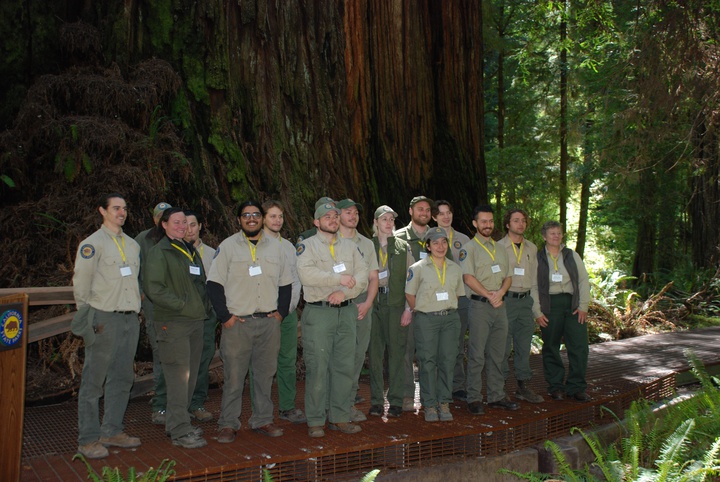 A trail crew spent a total of 23,000 hours hand-carrying metal grates that weighed 250 pounds each to build the elevated walkway through the Grove of Titans. | Photo: Jessica C. Andrews

• Redwood National and State Parks Recruiting 'Titaneers' to Help Protect the Grove of Titans; Volunteer Meetings Set for Next Week

• Grove of Titans Boardwalk Up and Running; Full Realignment of Mill Creek Trail Expected in Summer 2022

(Updated at 10:21 a.m.: Josie Merck made a donation personally to support the Grove of Titans elevated walkway.)

Erin Gates led her visitors 1.7 miles down the Mill Creek Trail, following the new elevated walkway into the Grove of Titans.

Along the way, Gates, deputy superintendent for Redwood National and State Parks, pointed out the metal grates the trail crew had to hand-carry into the grove, each weighing approximately 250 pounds, and the work that went into shaping the trail.

When she and her visitors reached the grove Gates sidled up to a podium fronting a tree that had been popular with brides, and had the scars to show for it.

“This was a tree that people wanted to come and take their wedding photos in front of,” she said. “And this became a popular tree for people to climb and to be standing (on) in their wedding dresses. This tree used to be covered in ferns, and they’re starting to come back.”

Gates joined dignitaries with Save the Redwoods League, the Redwood Parks Conservancy, the Tolowa Dee-ni’ Nation and Redwood National and State Parks on Saturday and cut the ribbon, officially opening the Grove of Titans and the Mill Creek Trail to the public.

Nestled in Jedediah Smith Redwoods State Park, the Grove of Titans houses some of the world’s largest redwoods by volume. But 20 years after it was discovered, visitors went off trail in an effort to view the trees, destroying the grove’s understory plants, compacting the soil and inhibiting the trees’ ability to take in water and nutrients.

Realigning the Mill Creek Trail, constructing the new boardwalk and restoring the grove cost approximately $4 million. Unveiled in 2018, the project was possible through donations made to Save the Redwoods League, which contributed more than $2 million toward the project.

Redwood Parks Conservancy donors gave $205,000 and more than $900,000 was donated to the project in the form of in-kind contributions, according to a Redwood National and State Parks news release.

But according to Save the Redwoods League CEO Sam Hodder, an integral piece of the fundraising puzzle for the Grove of Titans came from Josie Merck.

“Josie picked up the paper and made a phone call to the (Redwood Parks) Conservancy, wanting to help,” Hodder said. “The conservancy rang the bell and brought together a group of partners that has come together to help make this happen.” 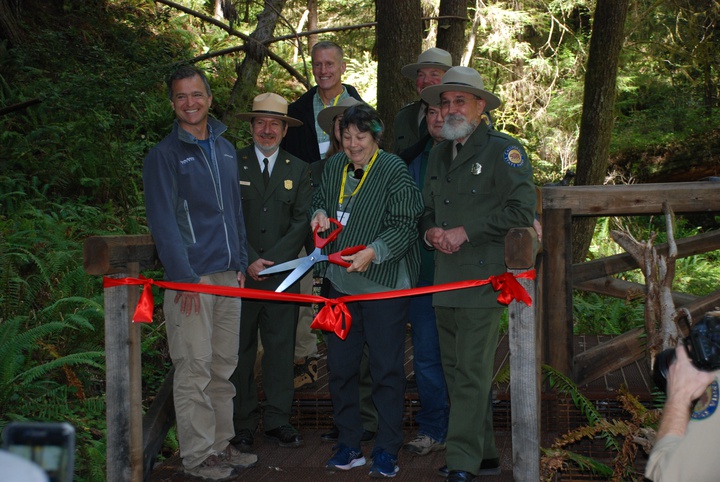 Josie Merck (center) joines dignitaries from Save the Redwoods League, the Redwood Parks Conservancy and Redwood National and State Parks and cuts the ribbon on the new Grove of Titans elevated trail. | Photo: Jessica C. Andrews

Merck said she was at the Clift Hotel when she picked up the San Francisco Chronicle in 2017 and read about the Grove of Titans. Merck said she read about the “misguided humans smitten with self and cell phones” rubbing against the trees and impacting the soil and root systems.

“It truly affected me,” she said, of that Chronicle article. “I thought, how can we humans be doing this to these ancestors of ours? So, my contribution was to trigger a match. I have had relatives who have been deeply involved with several redwoods, and others over the last 100 years. But I’ve never been here, so this was an opportunity to come, to be invited and to come.”

In addition to being able to explore the grove without damaging the trees, visitors will learn about the habitat and the Tolowa people that still call the area home.

On Saturday, before he and Loren Bommelyn gave a blessing, Tolowa Dee-ni’ Nation Vice Chairman Scott Sullivan welcomed visitors to his peoples’ ancestral territory. He spoke of the “government-to-government relationship” the Tolowa Dee-ni’ Nation built with Redwood National and State Parks and said it’s his people’s duty and obligation to bring balance to “everything that we do.”

“This trail is a perfect example of striking that balance,” Sullivan said. “It’s finding a balance between mankind’s desire to explore these beautiful spreading forests around us and at the same time to protect the root systems of these thousands of years-old beings. It’s going to be on all of us here to make sure that when we tell the story of this place, we remind people how delicate this irreplaceable ecosystem is.”

Tolowa Dee-ni’ Nation Tribal Councilor Terile Keevil said she hiked into the Grove of Titans for the first time about two weeks ago, viewing the new interpretive signs that include both the English and Tolowa names.

“It’s wonderful to feel recognized,” she said. “The signage is great, not only for tourists, but for residents too and for our tribal citizens. The trail is fantastic.”

Nick Feminella was among the crew that helped construct the new trail. Feminella, who came to work at Jedediah Smith Redwoods State Park from Humboldt Redwoods State Park in December, estimated he put about 700 hours in to constructing the trail. That included carrying the metal grates into the area as well as bringing gravel in by wheelbarrow. 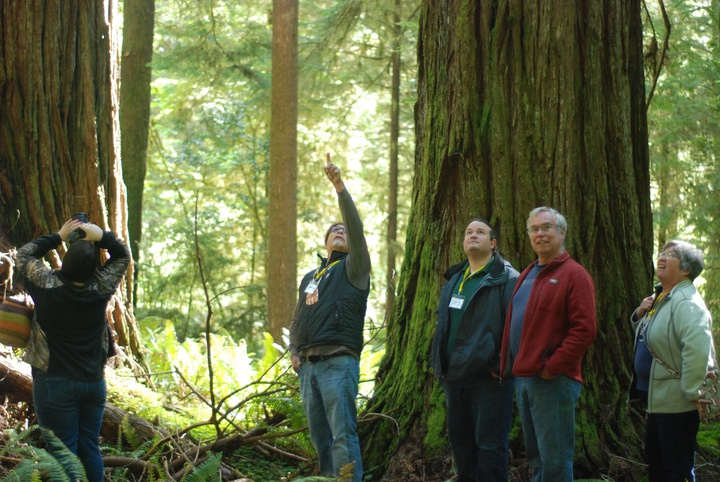 While the celebration centered on the elevated walkway through the Grove of Titans, Feminella said he and his fellow crew mates are still working on the rest of the Mill Creek Trail, which stretches all the way to the Smith River.

“We’re working on a couple more bridges back there and we’re going to widen out some parts of the trail,” Feminella told the Outpost. “This has been real fun. I mean, you get to hike every day, basically.”

The trail crew spent more than 23,000 hours to realign the Mill Creek Trail and build the elevated walkway. Crews also hand-carried 128 tons of construction materials and tools to the site, removed the old social trails and restored and replanted ferns and other understory plants that had been damaged.

In anticipation of the tourist season, Redwood National and State Parks have started a volunteer program, “The Titaneers,” who could monitor the trails and tell visitors how fragile the trees are and how significant efforts to protect it were.

Scott Larson, executive director for the Redwood Parks Conservancy, said his organization, Save the Redwoods League and others need to teach existing visitors and new visitors about why the project happened.

This may include integrating digital devices and virtual tours to reach out to visitors as far away as Los Angeles and New York City.

“I came through here when I was 5,” Larson told the Outpost. “For me, this was sort of a coming home. So, for kids, how can I share this now with my children? How can we do it in a way where they’re leaving no trace?”

For more information on volunteering as a Titaneer, email JedSmithTitans@gmail.com.