Redwood National and State Parks Recruiting 'Titaneers' to Help Protect the Grove of Titans; Volunteer Meetings Set for Next Week 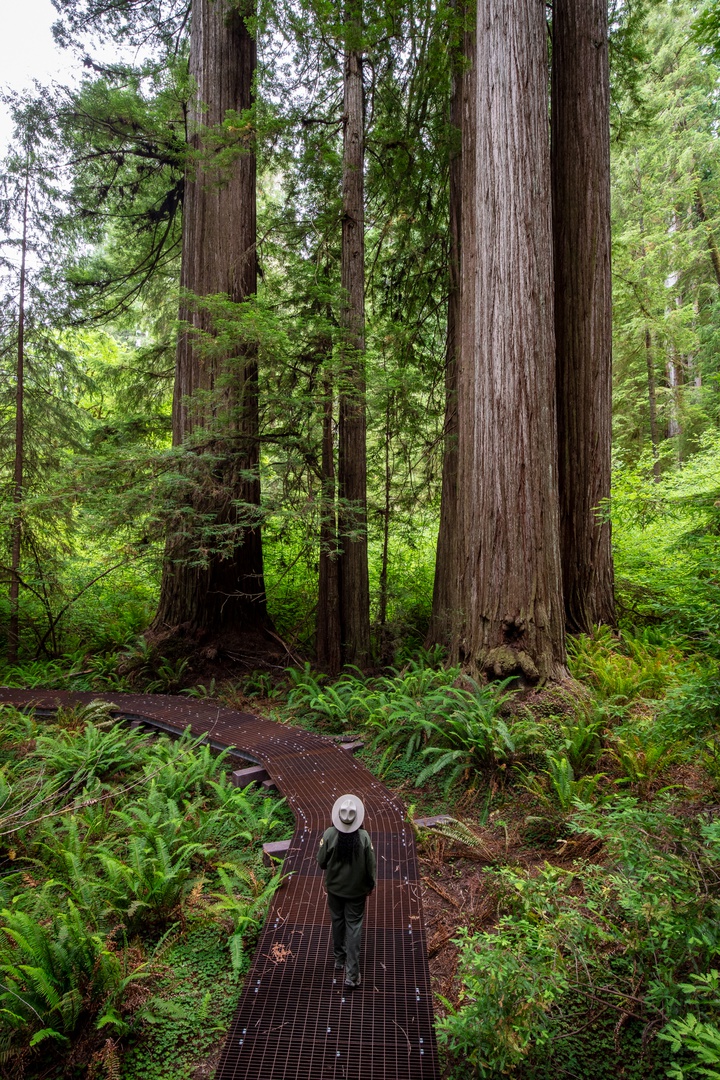 The elevated walkway through the Grove of Titans allows visitors to experience the massive trees without damaging. Photo courtesy of Max Forster, Save the Redwoods League

• Grove of Titans Boardwalk Up and Running; Full Realignment of Mill Creek Trail Expected in Summer 2022

Construction crews have completed an elevated path designed to protect the Grove of Titans from the thousands of visitors who, over the past two decades have nearly loved it to death.

Now, in anticipation of the summer tourist season, Redwood and National State Parks rangers are adding another layer of defense for the massive trees — volunteers, or, as Erin Gates has called them, “The Titaneers.”

Redwood National and State Parks will host an informational Zoom meeting for new volunteers at 6 p.m. Thursday. An in-person meeting, and a guided hike of the grove, will be held at 1 p.m. Feb. 26 starting at the Hiouchi Visitor Center on U.S. 199.

The Grove of Titans’ elevated walkway will have its grand opening in May, Gates said.

Nestled along the Mill Creek Trail in Jedediah Smith Redwoods State Park, the Grove of Titans houses some of the world’s largest redwoods by volume. But 20 years after it was discovered, visitors have created a network of social trails, destroying the grove’s understory plants, compacting the soil and inhibiting the trees’ ability to take in water and nutrients.

Since people already knew where the grove was despite efforts to keep its location a secret, California State Parks, Save the Redwoods League, the Redwood Parks Conservancy and the National Park Service teamed up to build a 1,300-foot-long elevated walkway around the trees.

The $3.5 million project began in November 2019. The elevated walkway opened in September 2021, though crews are still working to connect the Mill Creek Trail with the Hiouchi Trail alongside the Smith River, Gates said. 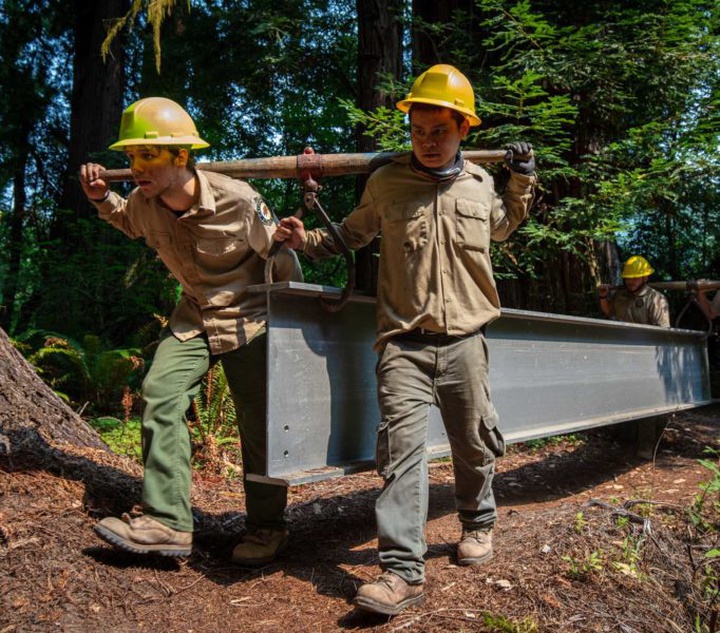 Construction crews hauled 250-pound metal plates and 750 pounds of mud fill to create the elevated walkway through the Grove of Titans. Photo courtesy of Max Forster, Save the Redwoods League

Anticipating an increase in visitors this summer, Gates said a team of local volunteers could not only ensure that they keep to the elevated trail around the Grove of Titans, they could tell the grove’s story, about how fragile the trees’ are and how significant efforts to protect it were.

“Some of the heroes of this story are the trail crew, the people that carried these 250 pound metal grates 3 and a quarter mile all the way out there, or 750 pound mud fills to build this walkway,” Gates said. “They were hand carried by this group of these young members that for the last year and a half have worked through rain, a pandemic, wind.”

This is the first time Redwood National and State Parks has actively recruited volunteers from the community whose primary focus will be roving the trails and talking to visitors, Gates said. Her goal is to start with a core group, the “Titaneers,” but volunteers could be stationed anywhere within the parks, including the nearby Boy Scout Tree Trail and Stout Grove, or even into Humboldt County.

“We ask people to stay on the trail, we ask people not to bring dogs into the forest on leashes or not, these volunteers will be able to talk to visitors about why we have some of these rules,” Gates told the Outpost. “And talk about the fact that we have these endangered species that live in the forest, like the Humboldt martin or Pacific fisher, and if they smell the scent of dog on the trail, they’re not going to be part of the forest.”

The volunteer meetings next week will focus on what a volunteer commitment with RNSP would look like, what volunteers could do as well as how to sign up, Gates said. She will also guide a hike into the grove. 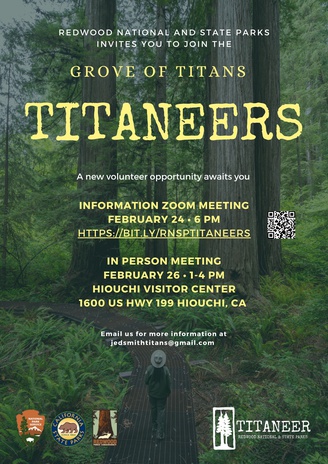 Volunteer training will be held in March and April, which would include techniques for interpretation and educating visitors — how to craft information about, say, botany and ecology in a language people can understand and be inspired by, Gates said. Volunteers also need training on how to report any concerns or problems they see on the trails to staff, she said.

People also don’t have to live in Del Norte County to be a “Titaneer,” Gates said, adding that her first volunteer comes from Healdsburg.

“We are happy to have volunteers give us as much time or as little time as they can,” she said. “If they want to travel to get here and use this as a good reason to be coming up to Del Norte County more often, we’ll take them.”

Redwood National and State Parks receives more than 1 million visitors annually, Gates said. She said she anticipates an increase in other areas of the parks in Del Norte and Humboldt counties, though she said it’s hard to figure out where exactly visitors go.