« Crescent City Reminds You to Be Safe With Your Campfires 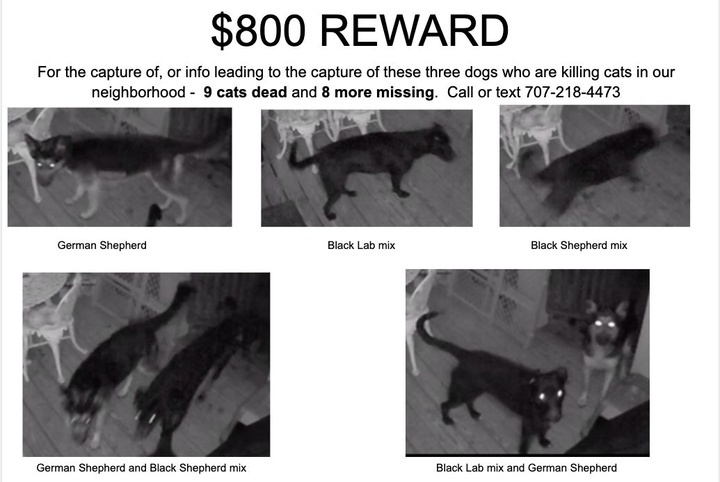 In January, Krystol Berry and other Fort Dick residents offered an $800 reward for information leading to the capture of three dogs they say have attacked their pet cats. | Image courtesy of Krystol Berry

(Updated at 12:55 p.m. to include a statement from the owner of the Fort Dick dogs.)

Del Norte County officials have reached a resolution with the owner of three dogs that have been attacking and killing pet cats in the Fort Dick area since December. But at least one resident isn’t satisfied.

The owner has agreed to relinquish one of his dogs and pay a $3,000 fine, Justin Riggs, the county’s director of animal services, told the Wild Rivers Outpost. The owner has also agreed to have no “running-at-large” violations relating to the two remaining dogs for five years.

“If we see the dogs at large or are given sufficient evidence of them running at large, the full amount of the original citation, less any payments that have been made, will be due,” Riggs told the Outpost via email Friday. “This agreement provides a strong impetus for the owner to keep them completely contained and the removal of the most active dog from the pack will make them less likely to cause problems if they do escape.”

But Krystol Berry said the agreement the county reached with the owner wasn’t the resolution county officials had discussed with her and her neighbor when she met with them on June 3.

The Quail Lane resident who caught the dogs on camera in mid-December attacking her cats said turned all the video footage she had over to County Counsel Joel Campbell-Blair, including dates and notations on each vehicle.

During that June 3 meeting that included Riggs, County Administrative Officer Neal Lopez and supervisors Darrin Short and Valerie Starkey, Berry said Campbell-Blair assured her there was sufficient evidence to charge the owner for each time his dogs were captured on camera roaming the neighborhood.

“They said, ‘What we will offer him if he’s unable to pay his fines, in lieu of fines, he can surrender the dogs,’” Berry told the Outpost. “So that was the deal. I said, ‘That’s great. Our neighborhood just wants the dogs gone. That’s our goal. We’re not concerned about the money.’ They said if he did pay the fines, the fines will go toward Animal Control and the dog program.”

Meanwhile, the owner of the dogs, who asked that his name not be included, says he has been subject to harassment and threats. Though he agreed to relinquish one of his dogs in exchange for paying a lesser fine, the owner said he knows his dogs aren’t responsible for “20-plus pet cats that have been missing or killed.”

The owner said the Del Norte County Sheriff informed him that his dogs were potentially a problem on Jan. 14.

“We have taken all necessary precautions to ensure that our dogs will never be free to roam again, including keeping them in a locked kennel. We have also hired a caretaker/security guard due to ongoing threats made by individuals in the neighborhood,” he told the Wild Rivers Outpost on Tuesday. “Since the dogs have been contained, there have been multiple other animals in the area that have been killed or gone missing. That speaks volumes.”

Berry’s June 3 meeting came after an administrative hearing between the county and the dogs’ owner set for May 20 was canceled. Berry said she and at least 20 people were planning to present evidence at that hearing.

But according to Riggs, Campbell-Blair said there wasn’t sufficient evidence to prove the dogs were potentially dangerous, which would have allowed the county to seize them.

Berry, who complained to the Del Norte County Board of Supervisors following that canceled hearing, said Campbell-Blair had emailed her asking if she was willing to give him another chance to go over the evidence, which led to the June 3 meeting.
Berry said she found out about the agreement negotiated between the owner and the county from a representative of the Humane Society of Del Norte, who asked her if she was happy with the outcome.

Though there haven’t been any reports or camera footage showing dogs roaming her neighborhood since the owner and county negotiated, Berry said she felt that the county changed the rules of the game. But, she said, “we’re just never sure when these dogs are going to get loose.”

“I’m not going to bother with the county at all. I’m done,” Berry told the Outpost. “It’s so blatant that the best interest of the public is not the best with what the county is looking for. An entire community was affected by this and they’re just concerned about collecting fees.”

Though she said she’s grieving for the owners of the cats that were killed, Starkey said the county wasn’t going to reach a solution that made everyone 100 percent happy.

However, while there wasn’t enough evidence to make a “slam dunk case” for the dogs to be labeled potentially dangerous, Starkey said there was sufficient footage to prove they weren’t contained. The fines would be $100 for the first violation up to $500 for multiple violations per dog, Starkey said.

“He racked up a significant fine and we agreed in that meeting — they felt comfortable if we just fined the guy an enormous amount with the understanding that every time the dogs got out it was added to the fine. It’s not the best, but it’s something they could live with,” Starkey said. “So they slapped the guy with a fine. He gets fined and now he’s like, ‘It’s $13,000. I can’t pay $13,000, can I negotiate?’”

Starkey said she’s not sure why Berry and her neighbors feel removing one of the dogs — reducing the threat “by a third by taking a dog” — isn’t an acceptable outcome. But none of the county’s options were going to be the best solutions, Starkey said.

“We’ve learned we got to act swifter and get these animals, either (the owner) fined or make sure they’re secured. And we’ve learned a lot,” she told the Outpost. “We’ve added more resources to Animal Control because we have additional Measure R money. We’re able to identify a problem. We have a third less threat because one dog has been impounded. He relinquished them and that’s what I’m having a hard time understanding — Krystol’s frustration.”

When the dogs were first caught on camera attacking cats in December, residents said county Animal Control was slow to respond. Riggs said that slow response was due to a staffing shortage that his department had been dealing with for about eight years.

At the time, Riggs said his department’s staffing level was below 50 percent. He only had one animal control officer — Brittany Pratt — who also had to spend a lot of her time caring for the animals at the shelter.

In May, Riggs told the Outpost that his department hired a new animal control officer and had extended an offer to a second animal control candidate. The county also filled a vacant assistant department head position in Animal Control Services.

On Thursday, Berry said when the dogs were first causing problems, both the sheriff’s office and Riggs advised her and her neighbors to shoot them. Berry said that was something she wanted to avoid.

“Obviously, I’m an animal lover. I don’t want to hurt somebody’s pet and that’s why it dragged out as long as it did,” she said. “I was trying to avoid these dogs coming to harm. Unfortunately, it looks like that was probably the best option.”

The owner of the dogs said he felt his animals were being used as scapegoats, though he admitted that they were captured on his neighbors security cameras. He pointed out that other dogs, owls, mountain lions, bear, raccoons and eagles are also present in the Fort Dick area. He said he felt that the original fine of $12,000 plus the possibility of losing all three of his dogs was too heavy.

“I’m sorry for any inconvenience and in good faith effort, we’ve done everything we can and they haven’t been out since. The dogs have not been out since,” he said, adding that he gave up one of his dogs to “appease maybe a few individuals.”

The dog owner added that the case is still ongoing.