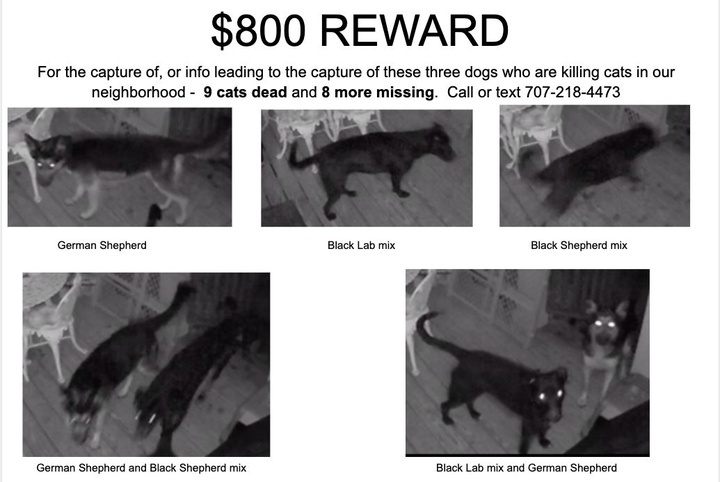 In January, Krystol Berry and other Fort Dick residents began offering an $800 reward for information leading to the capture of three dogs they say have attacked their pet cats. | Image courtesy of Krystol Berry

Krystol Berry hoped an administrative hearing would help put an end to her cats, and others, being attacked by a trio of dogs that had been roaming her Fort Dick neighborhood unrestrained off and on for the past five months.

At least 20 people were planning to present evidence at that hearing, the Quail Lane resident told the Wild Rivers Outpost. She had video evidence, photos and a 22-page timeline of what the dogs had done to her pets and those belonging to her neighbors.

Their goal, Berry said, was for the dogs to be labeled as dangerous, that they not be allowed off a leash or off their owners’ property. If they were allowed to roam the neighborhood unrestrained again, the dogs would then be taken from the owner, she told the Outpost.

But the hearing — set for Friday at the Flynn Center — was canceled.

“County counsel has decided this case is not a priority and he doesn’t feel we have enough evidence to prove the dogs killed cats,” Berry said. “What he wants is dogs on camera actually killing a cat, and he’s got one. Apparently that’s not enough evidence for him.”

According to Del Norte County Animal Control Director Justin Riggs, though County Counsel Joel Campbell-Blair told him there wasn’t sufficient evidence to prove the “potentially dangerous or other violation,” which would allow the county to seize the dogs, there was sufficient proof that they were running at large.

“(Campbell-Blair) said the evidence clearly does prove they were running at large,” Riggs told Berry, adding that the dogs are licensed with the county, which means their rabies vaccinations are current. “We are going to cite them for this and will continue to cite them if we witness the dogs at large or are provided evidence of them running at large. These fines can escalate quickly to $500 per offense. It sounds like this is our best avenue to make sure they stay contained at this point.”

Riggs told Berry he would try to schedule a visit with the dogs' owners next week to ensure their containment. Riggs asked her to keep Animal Control posted if further issues arise and to forward additional evidence to his office.

Berry’s security cameras first picked up footage of the dogs in her yard back in November. At about the same time she said her neighbor found his cat dead, noticing large footprints in wet paint near his garage.

On Dec. 11, Berry’s security cameras captured the dogs on her porch harassing her cats, flushing both out of their bed and chasing them off. The dogs returned three hours later and, though the cats weren’t around, tossed their bed and “threw everything around,” she told the Outpost on Dec. 22.

In January, Berry and her neighbors posted an $800 reward for information leading to the capture of the three dogs who, she said, were responsible for nine dead cats and eight more that were missing. County Animal Control provided a trap and sent its sole animal control officer, Brittany Pratt, to try to either capture the dogs or determine where they came from.

Later that month, an owner was identified and had been warned to keep his dogs contained, Berry said Friday. A second person with connection to the dogs also came forward on Facebook, initially apologizing for the situation the dogs caused, and then asking for proof that it was her dogs involved.

The Outpost’s efforts to contact these individuals were unsuccessful.

The dogs were last seen outside their property in March, Berry told the Outpost.

“The dogs were out roaming for three days straight,” she said. “I’m not aware of animals being killed, but they were spotted on camera and I could hear barking behind my property.”

When Berry and her neighbors first reported the incident to the county in December, she said it took some time for Animal Control to respond.

That slow response was due to an ongoing staffing shortage that had stretched on for about eight years, Riggs told the Outpost in December.

On Thursday, Riggs told Berry that his department hired a new animal control officer who started on May 13. Pratt was recently promoted to Animal Services Supervisor, though that promotion created a vacancy.

“We held interviews for the position on Monday and a conditional offer has been extended to a candidate,” Riggs told Berry on Thursday. “We have also finally found somebody to fill our long vacant assistant department head position. If everything proceeds well with the hiring, we will have all our full time vacancies addressed by the end of June.”

On Friday, Riggs told the Outpost that because he only had one animal control officer on duty until recently — who was also responsible for care at the county’s animal shelter — he had to step in to help with the Fort Dick case.

“My stepping in to help in that way with a case in either division is pretty common when we don’t have a division chief and/or are short staffed in the division,” said Riggs, who is also the county agricultural commissioner and sealer of weights and measures.

But Berry is still disappointed with how the county handled her case.

“It’s like we’re starting all over again,” she told the Outpost. “It’s really frustrating to know we license our dogs, pay our fees — we do the right thing. And when we need animal control to help us and we can’t count on them, this is when people start taking matters into their own hands.”

On Friday, Berry posted in the Fort Dick Neighborhood Watch’s Facebook group that the $800 reward she and her neighbors had established for capture of the dogs in January still stands.