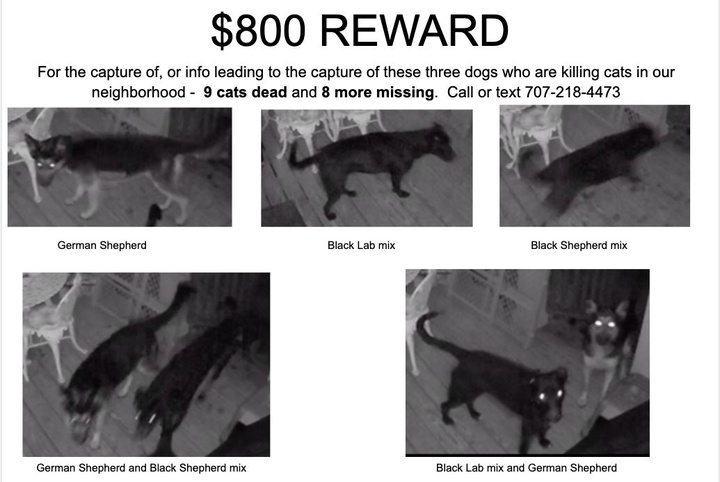 The dogs have been running loose in the Fort Dick area for over a month. Photo courtesy of Krystol Berry

After three dogs have been killing cats in the Fort Dick area for about a month, a handful of residents are offering an $800 reward to anyone who captures them or offers information leading to their capture.

Nine cats are dead and eight more are missing, Krystol Berry told the Wild Rivers Outpost on Wednesday. Residents still don’t know where those dogs come from or who they belong to, though there’s been some speculation. And the dogs have evaded the live traps they set out to try to capture them, Berry said.

Berry, who lives on Quail Lane, noticed the dogs harassing her cats, flushing them out of their bed and chasing them off, on Dec. 11. One cat has yet to return, she said, which leads her to believe that it’s dead.

On Wednesday, Berry told the Outpost that a few more cats were killed on Gahart Lane on Tuesday. The dogs were seen on nearby Kristian Lane, she said. They’re also seen during the day instead of just being out at night, Berry said.

Though Del Norte County Animal Control provided a trap and sent its sole animal control officer to the area to try to capture the dogs, or at least determine where they come from, an ongoing staffing shortage has hindered further response.

District 2 Supervisor Valerie Starkey, who met with Animal Control Director Justin Riggs to determine what his needs are, said that she hopes to put some Measure R money toward hiring more staff. Starkey said she will also visit the animal shelter on Tuesday.

Measure R was the 1 percent sales tax Del Norte County voters approved in 2020 and could be used for this purpose, according to Starkey. But, she noted, using those dollars to hire more staff won’t “solve today’s problem.”

Riggs is also the county animal commissioner and the sealer of weights and measures.

Starkey said she’s working with another Fort Dick resident, Bob West, who has seen the dogs on a daily basis for about three to four days to trap the animals. However, Starkey pointed out that since the dogs don’t appear to be hungry, she doesn’t anticipate catching them.

West said he doesn’t have any cats that have been killed, but the dogs travel through his property on a “pretty regular basis.”

Starkey, who has driven through the neighborhood, said she’s asked the Del Norte County Sheriff’s Office for extra patrol through the area so they could try to figure out where the dogs come from.

“The third thing is that we’re asking all the residents, when they see the dogs to call the non-emergency line at Sheriff’s dispatch — (707) 464-4191 — and report where they’re seeing the dogs,” Starkey said. “That way we can try and really pinpoint one location.”

Starkey said the goal isn’t to prosecute the owners of the dogs, but to educate them on how to safely keep their animals leashed up.

Berry said flyers have been posted in Fort Dick in an attempt to try to identify the dogs’ owners. People have also posted on the Facebook group, Crescent Critters… The Sequel. Berry said she and her neighbors have their suspicions about who the owners may be, but don’t have proof.

“If they’re watching all this, please, keep your dogs contained or they will be killed eventually,” she said, appealing to the owners.