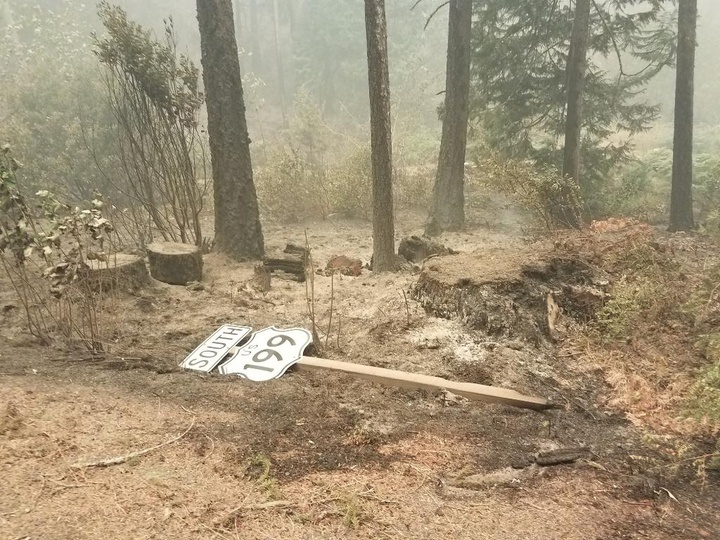 In 2020, the Slater Fire started in Happy Camp and spread to Del Norte County. File photo courtesy of Bill Steven

As the state Board of Forestry continues working on its minimum fire safe regulations for 2021, Del Norte County District 3 Supervisor Chris Howard urged his colleagues to provide comment on regulations that may impact future development in the community.

Howard, who sits on the county’s Natural Resources Goal Committee, said the issues will also affect development in rural California.

“If some of the regulations are put into place, they’re going to impact whether or not you can even build on that home site that you dreamed about building on,” he told his colleagues on Tuesday. “As a matter of fact, it’s even going to affect how insurance rolls out in the state of California. Many of us are aware that the cost of insurance has gone up, or you can’t even get it if you live in that wildland-urban interface.”

The Del Norte County Board of Supervisors voted 4-0-1 in favor of drafting another comment letter to the California State Board of Forestry and Fire Prevention regarding the State Minimum Fire Safe Regulations 2021. District 5 Supervisor Bob Berkowitz was absent.

According to Valachovic, who worked with county supervisors to draft a comment letter on the same regulations in April 2021, the state’s fire safe regulations focus on access to a parcel of land. This includes mandating road widths, length of driveways, weights that bridges can carry, water availability for fire suppression and if there’s an alternate way to get through an electronic gate should the power fail.

The regulations target new and existing development, Valachovic said. But where it gets challenging is when it applies to a subdivision that has existing lots that are not yet developed, she said.

“For example, one-way roads — the ideal goal is to work toward two-way access so you have an alternate access if one gets blocked,” Valachovic said. “I totally understand that, but (with) our bisected geography, our geology, the subdivision study may not facilitate that going forward. In a new subdivision, we have more options, but where you have an existing parcel it becomes more difficult.”

Valachovic said there were still questions around whether roads need to be surfaced for year-round use and if bridges need to be constructed out of non-combustible resources.

Currently, the draft fire regulations say the maximum one-way road length is half a mile — Valachovic said she wanted input from Kunstal on whether that’s a major constraint for Del Norte County.

The state Board of Forestry updated its fire safe regulations following a process outlined in  State Senate Bill of 2018, according to Valachovic.

In its April 3, 2021 letter to the Board of Forestry, the Del Norte County Board of Supervisors points out that 80 percent of the county is in public ownership. They stated they were concerned about the potential loss of developable land in the county as well as the potential that the regulations would increase the cost of developing the land that’s left.