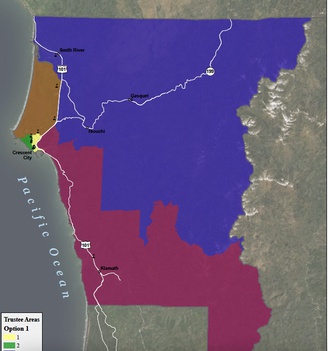 One of four options for re-drawn trustee area boundaries. Courtesy of PlanWest Partners

Del Norte County education officials got their first look Thursday at four potential options for new trustee area boundaries and urged consultants to push out as much information to the public as possible.

Acting as both the Del Norte County Board of Education and the Del Norte Unified School District Board of Trustees, officials discussed the role a school’s “catchment area,” or attendance zone, would play in these changed boundaries.

After receiving only two comments during a public hearing, trustees asked district staff to create a designated email to gather comments and to make sure parents and school faculty are aware of the potential changes.

“The larger change we’re making is instead of voting for all of us, (the public) is only going to vote for one of us,” said DNUSD Board President Don McArthur. “That should be clear that that’s a significant change.”

Starting in the Nov. 8, 2022 general election, school board trustees will be elected by voters living in the district they seek to represent. This is different from the current election model, which requires trustees to live within a defined area, but allows voters countywide to vote for them.

The current at-large election model makes DNUSD and the County Office of Education subject to litigation under the California Voting Rights Act, according to Jonathan Berry-Smith, an attorney with the Walnut Creek law firm Lozano Smith.

The California Voting Rights Act seeks to prohibit election models that could lead to diminishing the voting power of “certain minority groups” or communities of interest, Smith told trustees.

Del Norte Unified School District and the Del Norte County Office of Education must also go through a redistricting process using 2020 U.S. Census data to ensure an even distribution of population.

According to PlanWest Partners Spatial Analyst, Jason Barnes, under federal law the county’s trustee areas can’t deviate from each other by more than 10 percent. In Del Norte County, that deviation is about 13 percent, he said.

“If you take the total population for Del Norte County, if you divide it by five that’s going to give you a target number to reach for,” Barnes told trustees on Thursday. “Essentially, it’d be your total population divided by five; it would be right around 5,000 people. In Trustee Area 2 the population is a little low, so it’s below that target, and Trustee Area 5 is over our target.”

Del Norte Unified and the County Office of Education held pre-map public hearings in September to discuss the need for redistricting and transitioning election models. Another public hearing will be held on Jan. 27. Any proposed changes to the maps must be made public by next Thursday.

The first of the four options depicted new trustee areas as close as possible to their current configurations with a total population deviation of 6.3 percent, according to Barnes. However, school distribution under that option was “not great.”

“Some Trustee Areas had four schools and some had one,” he said. “It’s not necessarily a decision we would choose to use one option over the other, but it’s something I noticed.

The second option was similar to the first, but had a somewhat more even school distribution. Trustee areas 1 and 3 would have two schools within their jurisdiction, areas 2 and 4 would encompass three schools each, while Trustee Area 5 would encompass one school.

Barnes said he threw the third option out to “shake things up.” Under this iteration, Trustee Area 4’s boundaries would change from the Smith River to U.S. 101 to include Smith River School.

“This one, it does have a total deviation of less than 10 percent, but in terms of the area, some people might not like this because that particular trustee area does encompass so much land mass,” Barnes said. “It also does include Smith River if people thought this community should be included more on the west side of U.S. 101.”
The fourth option coincides with new boundaries the Del Norte

On Thursday, Barnes told trustees that this option was also similar to the current trustee area boundaries, but included change in the Crescent City area.

Though school attendance zones aren’t part of the federal criteria used to determine new trustee area boundaries, Smith said it could play into the community of interest stipulation.

“And that’s part of the reason we have these public hearings so we can hear these concerns and hear these thoughts,” he said. “It might very well be that people want school attendance zones to stay together or not to be divided here, or there may be a certain school attendance area that isn’t that much of a community of interest per se to where the community does not mind that it’s a split between two trustee areas.”

During the Board’s deliberation, Trustee Area 4 representative Charlaine Mazzei pointed out that while the third option to “shake things up” redrew trustee area boundaries so Smith River was incorporated into the same area as other coastal communities, other changes were relatively minor.

“I think it would be helpful to have a better explanation of what’s the purpose of the differences,” Mazzei said. “What does Option 1 give us that Option 4 doesn’t? At this stage, they don’t look that different, but i can see areas where there’s bleed over from those nice neat boundaries and that is always confusing to people.”

Barnes noted that because the new trustee areas have to stay within a certain population deviation, changes would be subtle. He noted that it’s up to people in the community to dissect those subtleties.

“We can’t take Crescent City and put it in one trustee area, it’s just too big,” Barnes said. “Crescent City, no matter what, is going to have to be split somewhere. As community members, those subtleties are really up to where you think that division should be.”

She also asked Smith and Barnes to make sure all of the options, as well as the program they used to determine the different configurations, be made available on the district’s CVRA website.

According to Smith, the Board of Trustees is expected to adopt its final map on Feb. 10.