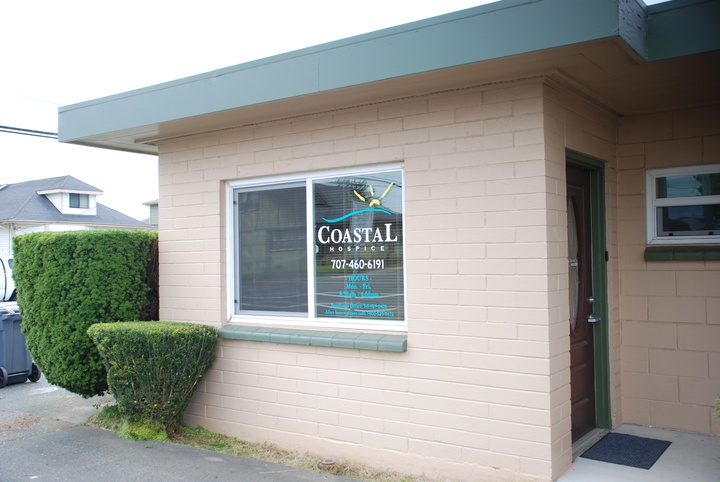 Elected officials recently declared their support for Sutter Coast Hospital’s efforts to bring hospice services to the community in the midst of a statewide moratorium, but a Brookings-based nonprofit says it’s about two months away from being able to see Del Norte patients.

Coastal Hospice — a subsidiary of Coastal Home Health & Hospice — already has an office with clinical space at 786 H Street in Crescent City. The organization received approval to obtain a hospice license from the California Department of Public Health in March. Once Coastal Hospice has its license, it can begin seeing patients, CEO Jamie Daugherty told the Wild Rivers Outpost.

“We turned in the paperwork,” she said Tuesday, adding that it takes about 6-9 months for California to issue a hospice license. “There’s nothing left for us to do but wait.”

Hospice care comes into play when a patient discovers they have a terminal illness and has made the decision not to seek curative treatment, according to Daugherty. At the beginning of the process, a nurse takes an assessment of the patient’s needs and the hospice provider takes care of their medication as well as side effects, any pain they may have as well as depression or anxiety.

Coastal Home Health & Hospice also provides wheelchairs, a hospital bed or oxygen if the patient needs them. A social worker and a chaplain also works through any grief and bereavement the patient or family is dealing with, according to Daugherty.

“The unexpected is very scary,” she said. “We teach the families, the caregivers and, of course, the person what to expect and then after the person passes, we come out and we help with that process, and we stay with the family for 13 months afterwards to help them through the grieving and bereavement.”

Coastal Hospice’s physician, Dr. Mark Silver is hospice and palliative care certified and has been practicing in Curry County for nearly 30 years, Daugherty said. He also is licensed to practice in California, she said.

The organization first put in for a California hospice license in November 2020, but because its plan was to only offer hospice in Del Norte and not home health, the state rejected its application, Daugherty said.

Coastal Hospice submitted a new application for a hospice license in November 2021, right after California Gov. Gavin Newsom signed State Senate Bill 664 and Assembly Bill 1280 into law. Those two bills enacted a moratorium on new hospice licenses and mandated an audit on the state’s licensing and oversight process, according to Hospice News.

The moratorium came after the Los Angeles Times reported that the number of hospice providers in the Golden State had grown and consisted largely of for-profit companies. The two bills also included a stipulation prohibiting hospices from paying healthcare providers for referrals, according to Hospice News.

According to Daugherty, in addition to submitting an exception request to the moratorium to CDPH’s Centralized Applications Branch, obtaining a hospice license also requires accreditation through Joint Commission, Community Health Accreditation Partners or the Accreditation Commission for Health Care.

Because of Coastal Home Health & Hospice’s long history in Curry County, it’s already familiar with the accreditation process, which is extremely expensive and time consuming, Daugherty said. But the organization can’t begin billing Medicare for its services until it completes that process, she said.

“In Oregon, there is also a certification for need, so you have to have shown there’s a need in the area. That way you don’t have these fly-by-night companies that are just popping up and kind of throwing off the symbiosis of the community,” Daugherty told the Outpost. “That’s kind of what’s happening in Southern California and the reason for the moratorium. Like in Oregon, you have to prove there’s a need in your area and then you can move forward, which is what we did when we made that request early on.”

On June 14, the Del Norte County Board of Supervisors approved a letter of support for Sutter Coast Hospital’s petition to the the state Centralized Applications Branch for approval to obtain a hospice license. According to Ellie Popadic, Sutter Coast’s director of operations, Del Norte County hadn’t had hospice services for about 20 years.

“We’ve been evaluating the need for hospice services for quite some time and the moratorium in place put a little bit of a block on that, Popadic told the Outpost on June 13. “We’re hopeful that we’ll be able to get approval from the state to be able to move forward with applying or a license and setting up service. That takes some time, but it’s definitely a need in our community.”

At its June 20 meeting, the Crescent City Council also agreed to send a letter of support to CDPH to applause from several in the community, including Sutter Coast Hospital’s home health nurses.

“Hospice allows us to capture a patient population that Home Health cannot reach, patients that would otherwise not qualify for home health because they don’t meat the home-bound criteria or some other criteria” Karen Degler, clinical manager for Sutter Coast Home Health Care, told City Councilors. “Hospice also provides additional benefits home health cannot — things like medical equipment and certain medications for pain management and comfort management. Those are covered under a Medicare hospice benefit.”

Daugherty said Coastal Hospice had been in communication with Sutter Coast Hospital throughout its efforts to obtain a California hospice license. She said her organization’s last communication was in March.

“They would be the first to know when we can take patients because I’m sure the patients would come from there,” she said. “When we were trying to get our exception for the moratorium, we reached out to Del Norte County supervisors and also (Assemblyman) Jim Wood. None of them got back to me.”

Once Coastal Hospice is taking patients, the organization will also need volunteers.

“Volunteers actually come out and spend time with patients and families,” Daugherty said. “One of the nice things they do is they go out and record their life story however they want to tell it.”