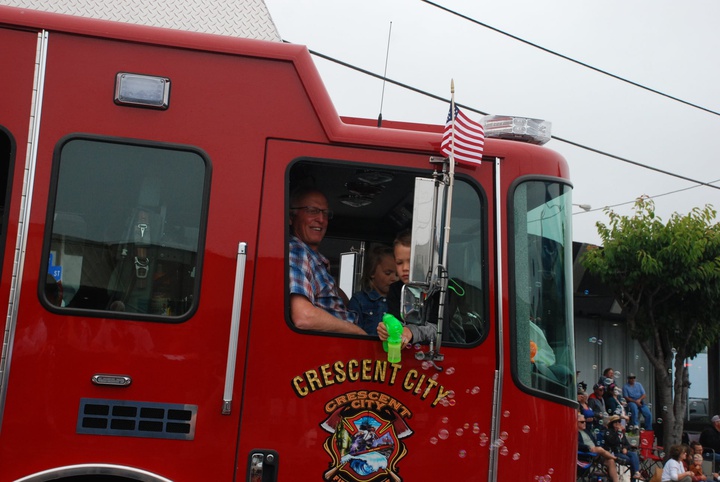 Crescent City Councilors and the Crescent Fire Protection District Board of Directors pointed to increasing gasoline and grocery prices, stating their volunteers shouldn’t have to “bear the brunt of the cost” to respond to emergencies.

At a joint meeting on June 30, both governing bodies also directed staff to draft a policy to review volunteer firefighter stipends every two years.

The decision to increase volunteer firefighter stipends came after the City Council and the CFPD Board hired Kevin Carey to lead the department in May after former fire chief, Bill Gillespie, retired. It also comes as Crescent Fire and Rescue firefighters are responding to roughly 1,600 calls for service, a slight decrease from the previous 2,000 calls.

According to City Manager Eric Wier, the increased stipends total about $68,000 annually depending on the call volume, type of call and the number of volunteers responding. The budget was based on the higher call volume, he said. With the lower call volume, Wier said the cost to the CFPD and the city would be a wash.

“We want people to keep responding. We don’t want it to cost them money to serve this department, serve this community, and that’s what it comes down to,” Wier said.

Non-officer firefighters will receive a $20 stipend, which is up from $10, per call. Stipends for firefighter officers will increase from $15 to $25, according to Carey.

Volunteers below the rank of captain will receive $10 for training days, Carey said. And those working the airport firefighter shift will continue to receive a $50 stipend, he said.

Stipends will be capped at $1,485.25 for firefighters; $1,666.63 for engineers; $1,871.98 for fire captains; and $2,230.92 for battalion chiefs. According to Wier, those caps represent the maximum amount volunteers would receive every month, though it doesn’t preclude them from responding to calls.

Though there have been times when volunteers have neared that maximum monthly stipend amount, Wier said no one has actually reached those caps in the past.

According to City Attorney Martha Rice, she and the fire district’s counsel, Ryan Plotz, researched the Fair Labor Standards Act rule for volunteers. The general rule is that volunteers can be compensated for their expenses plus any reasonable benefits or receive a nominal fee or a combination of the two.

Rice said Crescent City Fire and Rescue’s volunteer stipends are considered nominal fees, which means volunteers cannot receive hourly pay and their stipends must not exceed 20 percent of the total compensation a paid firefighter would receive.

Since Crescent City Fire and Rescue is a volunteer department, Rice said she and Plotz looked to the Arcata Fire District and Humboldt Bay Fire District for guidance based on the wages they pay their firefighters.

“For benefits, we calculated benefits using the Crescent City Police Officers Association benefits — that’s our only other safety unit,” she said. “In our analysis, we came up to what that 20 percent number would be for the various ranks. We then had to figure what that would equal on a 12-hour shift. That was fairly easy.”

In figuring out the call-based stipends, Rice said she and Plotz determined that if they were capped monthly at a 20-percent rate of what a paid firefighter would receive, the city and fire district would be within Department of Labor regulations.

According to Carey, the Labor Code requires fire departments to compare their salaries and benefits to like departments as far as size and call volume.

Wier also directed the City Council and fire district board to look at the stipulation in the resolution governing volunteers that live outside Del Norte County. Volunteers living outside of the county would be eligible for mileage and per diem reimbursement. Two people qualify for that reimbursement, Wier said, adding that it allows the department to “maximize resources.”

“Mainly Chief Gillespie as well as former assistant chief, Kurt Watkins, who lived in Humboldt,” Wier said. “When we get in a pinch, and we’ve been in a pinch in the past, we might need them to cover a duty shift. This primarily comes into play during fire season.”

According to Wier, though he is retired, Gillespie said he’d like to continue working with Crescent Fire and Rescue as a volunteer.
Gillespie’s role would be primarily as a duty shift supervisor since he knows how to serve as incident commander and can allocate resources, Carey said.

The Crescent City Fire Protection District’s next meeting will be held at 5:15 p.m. Monday.