Crescent City's Front Street Project Could Get $750,000 Boost From the Feds 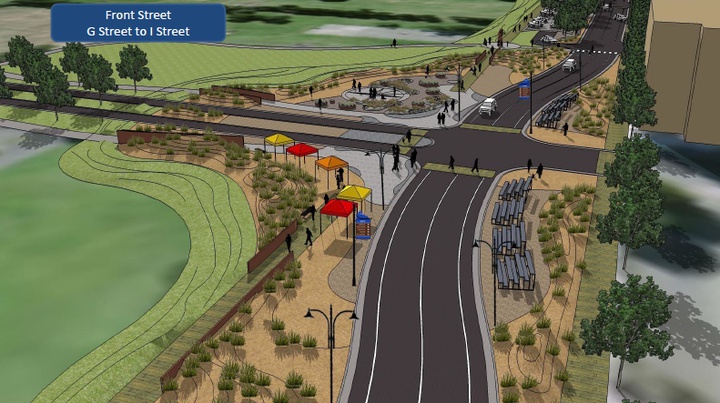 Concept art for the Front Street reconstruction project between G and I streets. | Image courtesy of Crescent City

Crescent City’s efforts to rebuild Front Street may get a financial boost from the federal government in the form of $750,000 in Community Project Funding dollars, Congressman Jared Huffman announced last week.

But those dollars can go toward expanding the city’s current plans to rebuild Front Street from G to I streets, he said.

“Our last understanding was (the bill) is still working its way through Congress and it needs to get approved, including a signature from the president, but it might get us to that next block — it’d be Play Street for us,” Wier told the Outpost. “If we can secure this money and bid that as part of the project, if we’re successful, hopefully construction can start as soon as spring 2023.”

The $750,000 for Crescent City and Elk Valley Rancheria’s Front Street Complete Street and Cultural Inclusion project is included as part of H.R. 8294, which the U.S. House of Representatives approved Wednesday.

The first appropriations bill of the 2023 fiscal year, H.R. 8294 includes a request from Huffman for $9.5 million to go toward community projects in his district, which stretches from Marin to the Oregon border.

“These projects will address some of the most pressing needs facing our region and I will keep pushing to get this across the finish line,” Huffman said in a written statement Wednesday.

H.R. 8294 would also extend payments in lieu of taxes (PILT) to local governments through fiscal year 2023, would increase The Emergency Food Assistance Program commodities funding by $19 million from last fiscal year and directs the U.S. Forest Service to develop tools to monitor and eradicate illegal marijuana grows on federal land.

The Front Street Complete Street and Cultural Inclusion Project consists of narrowing the road from four lanes to two lanes as well as installing sidewalks, crosswalks, bike lanes and new parking. There would be tsunami evacuation route markings on the road and a public address system to warn people of a natural disaster.

A gateway at Front and K streets will include interpretive signs that tie in to various features in nearby Beachfront Park and at Battery Point Lighthouse that focus on Tolowa culture, including the former village site of Taa-‘a-dvn, according to a presentation grant coordinator Bridget Lacey gave to the Crescent City Council in April.

On Monday, Wier said the $750,000 federal allocation to Crescent City could be combined with a total of about $2.2 million from multiple local pots that is earmarked to continue that rebuild to I Street. That $2.2 million includes $516,000 in voter-approved Measure S dollars, $516,000 in American Rescue Plan Act money, $750,000 from the city’s general fund and about $400,000 from the Del Norte Local Transportation Commission.

Crescent City has also partnered with Elk Valley Rancheria in applying for an $11 million Rebuilding American Infrastructure with Sustainability and Equity grant. If the grant is approved, the city will be able to rebuild Front Street from I Street to U.S. 101.
Wier said he expects to find out if the RAISE grant application was successful in November.

“For us, we’re working with Stover Engineering so the remaining part of Front Street will be designed and we would have a shovel-ready project to bid out quickly,” he said. “We have to put ourselves in a position to be competitive — have meetings with Congressman Huffman and explain the project and also say, ‘Look, this community, we’re ready to get this done. If we get this funding, we can spend it in a timely way.’”

Meanwhile, a proposed repeal of Measure S — the city’s 1 percent sales tax that voters approved in 2020 — is expected to appear on the Nov. 8 ballot. According to Wier, staff is preparing a report to bring back to the City Council on the impacts repealing the tax measure would have on the projects and departments dependent on that funding, including Front Street.

At the Crescent City Council’s July 18 meeting, City Attorney Martha Rice said she planned to bring a resolution before the Council on Aug. 1 that will include the question voters will weigh in on when asked to repeal the tax measure.