« Looking to Get Back on Your Feet After an Arrest? Some Experts are Coming Up From the Bay Area in a Couple of Weeks, and They're Eager to Help You With That 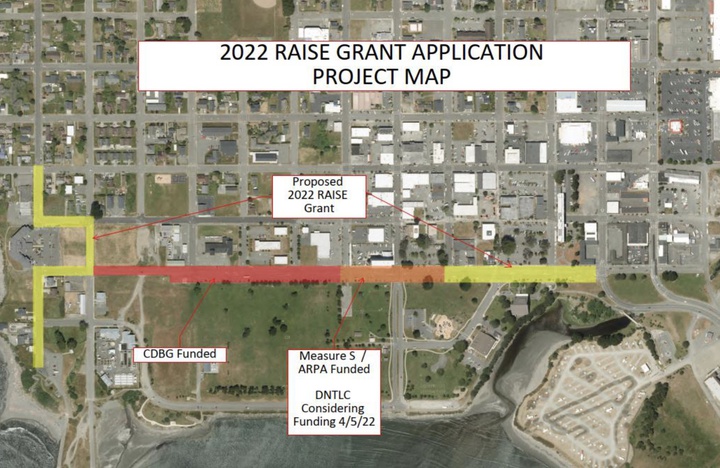 Crescent City, Elk Valley Rancheria want to use a $11 million federal grant to complete the yellow portions on the map. Courtesy of Crescent City

Del Norte County transportation officials on Tuesday kicked in the $400,000 needed for Crescent City to extend the reconstruction of Front Street another two blocks.

Meanwhile, the city is partnering with Elk Valley Rancheria to pursue a $11.5 million federal Rebuilding American Infrastructure with Sustainability and Equity (RAISE) grant to reconstruct what’s left of Front Street — from B Street to Oceanfront Lodge in the west and from I Street to U.S. 101 in the east.

If the grant is approved, the project would consist of narrowing Front Street from four lanes to two lanes and would include the installation of sidewalks, crosswalks, bike lanes and new parking. There would be tsunami evacuation route markings on the road and a public address system to warn people in case of a natural disaster.

A gateway at Front and K streets will also include interpretive signs that tie in to various features in Beachfront Park and at Battery Point Lighthouse that focus on the Tolowa culture, including the former village site of Taa-‘at-dvn.

“The gateway represents who we are as a city on tribal land and serves as an invitation to those features,” the city’s grant coordinator, Bridget Lacey, told the City Council on Monday.

The Crescent City Council on Monday unanimously the joint submission of the RAISE grant application with Elk Valley Rancheria. This is the fourth time the city has applied for a RAISE grant, according to City Manager Eric Wier.

Awarded through the U.S. Department of Transportation, there are about $2.275 billion available in RAISE dollars to local governments, tribes and transit agencies, according to Wier. The city’s most recent grant application for the same project was highly recommended, though it didn’t win. He said the city has hired a consultant, Urban Futures, to do a cost-benefit analysis, to strengthen its grant application.

If Crescent City and Elk Valley Rancheria are successful, the grant would be paid in the form of a reimbursement, Lacey said. The Department of Transportation may also withhold 5 percent of the funding, about $375,000, for about three years after the project closes out, she said.

As a result, Crescent City may have to take out a bridge loan to deal with any cash flow challenges that come up as a result of doing about $20 million in grant-funded projects at around the same time, Wier said.

This includes the buildout of the cultural interpretive center, bike pump track and KidTown expansion that will come as a result of the city’s $5 million Statewide Park Program Grant win in December, according to Wier. If the city’s $3 million Rural Recreation and Tourism grant application is successful, the amphitheater and waterfront plaza projects could also be under construction at the same time, he said.

“When we look at the construction piece of it, the thing that gets us in a little bit of a bind is the contractor has to complete about $500,000 (to) $700,000 worth of work in a given month,” Wier said. “That has to come out of the city coffers while we submit (for) reimbursement. That reimbursement could take 60-90 days, sometimes as long as 180 days.”

This is an issue the city’s finance director, Linda Leaver, brought up with consultant Urban Futures, Wier said. According to him, it’s estimated the city would need a loan of about $200,000-$300,000 to get the RAISE grant.

“We would be able to receive the $5 million for Beachfront Park, the $11 million from that RAISE grant and our piece would be paying for the financing of that cash flow,” Wier said. “In a sense that would be our match would be a few hundred thousand dollars.”

Reconstructing Front Street, which includes rebuilding the road matrix, has been a city goal since about 2011. In 2021, the city finished reconstructing the first half of Front Street, from B to G streets, using about $4 million in Community Development Block Grant dollars.

During a special joint meeting of the City Council and the Measure S Oversight Committee, the Council approved using $516,000 in unallocated dollars from that 1 percent sales tax toward extending the Front Street reconstruction from G Street to I Street.

The City Council also committed $516,000 in American Rescue Plan Act dollars and $750,000 from the general fund toward the Front Street project. Now that the Local Transportation Commission approved contributing $400,000, the city is expected to move forward with construction on that portion in late summer, according to Wier. The total project cost is expected to be $2.2 million.

On March 15, Wier said he hoped the CDBG-funded project as well as the upcoming Front Street reconstruction will make the city’s RAISE grant application successful this year.

Though the possibility that the US Department of Transportation would withhold 5 percent made some on the City Council pause, Councilor Blake Inscore noted that it’s possible the transportation department won’t withhold that amount. Not applying for a RAISE grant would give the message that Front Street isn’t a priority, he said.