« COVID Testing, Vaccination Sites to Change Venues, Vaccines Will Not Be Offered Monday 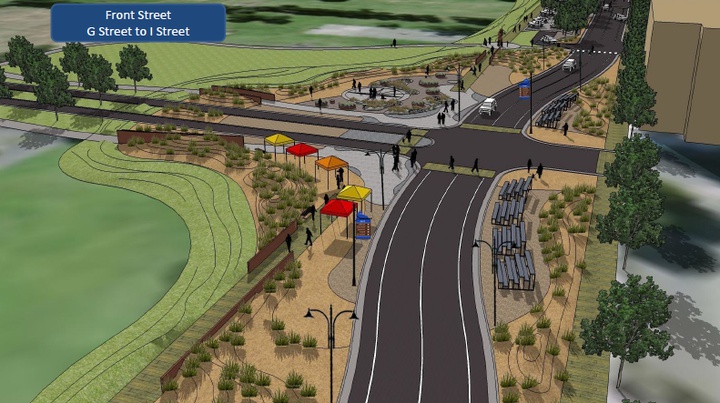 Concept art for the Front Street reconstruction between G and I streets. Image courtesy of Crescent City

• Despite Increases in Tax Revenue, Including An Extra $700,000 in Measure S Dollars, Crescent City Struggles With Staffing

(Updated at 7:56 p.m. to clarify that the $750,000 the city plans to put toward the reconstruction of Front Street will come from its general fund.)

A year after it finished redesigning and rebuilding Front Street from B to G streets, Crescent City officials say they will be able to extend the project another two blocks if the Del Norte Local Transportation Commission kicks in $400,000.

The city plans to put $516,000 in unallocated Measure S dollars, about $516,000 in American Rescue Plan Act money and $750,000 from the general fund toward reconstructing Front Street between G and I streets, Crescent City Manager Eric Wier told the Wild Rivers Outpost on Monday.

The $2.2 million project consists rebuilding the road matrix itself as well as laying down 48-inch storm drain pipe and a 10-inch water main, according to Wier. If the Local Transportation Commission grants the city’s request for $400,000 in Regional Surface Transportation Program Dollars, the city could move forward with construction in late summer, he said.

“Stover Engineering is working on finalizing the plans for those two blocks and are committed to meeting an accelerated schedule,” Wier told the Outpost. “Those plans will be done at the end of April. We’re going to bid it in May and hopefully have a contract to present to the Council the first part of June. We expect a notice to proceed with construction somewhere around the first part of August.”

The DNLTC’s technical advisory committee will consider the city’s request on Tuesday. It will then make a recommendation for the DNTLC to consider on April 5, according to Director Tamera Leighton.

Wier pitched the next phase of the Front Street reconstruction project to the Crescent City Council and the Measure S Advisory Committee at a special joint meeting March 15.

Measure S, the city’s voter-approved 1-cent sales tax, had generated $700,000 more than the initial projection of $1.3 million, he said. The city is also expected to receive an additional $175,000 from other sales taxes this year as well as an additional $400,000 in transient occupancy taxes due to an influx of visitors.

Completing the reconstruction of Front Street from B Street to U.S. 101 has been a priority project for nearly two decades, according to Wier. In 2011, the city completed a master plan that included reducing the width of the road to two lanes, constructing an arch near K Street and adding parking for Beachfront Park and the Crescent City Cultural Center.

The G-I Street portion would include a meandering section near the main entrance to Beachfront Park with landscaping and sidewalks.

Thanks to a $4 million Community Development Block Grant, the city was able to complete a storm drain replacement project that included rebuilding Front Street from B to G streets in 2021. As soon as that project was done, Wier said, residents wanted to know why the city couldn’t complete the street.

Even after announcing that Crescent City won a $5 million Proposition 68 grant to expand Beachfront Park, a project that includes adding a bike track and a Tolowa cultural section, people asked about Front Street, Wier said.

But finding a grant that would fund the entire 10-block reconstruction has been near impossible, according to Wier. Because the city lacked the ability to provide matching dollars, it  had to pursue large zero-match grants, like the $17 million Rebuilding American Infrastructure with Sustainability and Equity grant, he said

Though it partnered with Elk Valley Rancheria to try to obtain that grant last year, Wier said, the city was unsuccessful.

Leighton, noting that transportation funding is often tied to a road’s “safety index,” said the reason finding grants for Front Street is difficult is because no one has been injured or died as a result of the road’s conditions.

Wier said an evaluator for the RAISE grant came to Crescent City and walked the area where the arch and sidewalk would be, measuring out 80 feet and timing himself.

“We still didn’t rise to the top because what it comes down to is we didn’t have the fatalities,” he told Councilors and Measure S Oversight Committee members. “We’re going against big cities or some areas that had a lot of fatalities. Unfortunately, that’s really going to swing the funding.”

Wier said he hopes that using CDBG dollars to reconstruct the first half of Front Street and local dollars to finish the G-I street section this summer will make the city’s RAISE grant application successful this year.

Finishing the Front Street reconstruction, which includes extending the project to U.S. 101 in the east and past B Street to Oceanfront Lodge in the west will cost an estimated $10.5 million, Wier told the Outpost.

The RAISE grant application is due April 15.

But that’s contingent on the DNLTC awarding $400,000 to the G-I street portion of the Front Street reconstruction. On March 15, Measure S Oversight Committee chairwoman Kelly Schellong asked Leighton if she was sure the commission would approve the request.

Leighton said the commission would have to take into consideration other regional transportation priorities. However, she said, the accelerated timeline, and its shovel-ready status may work in the project’s favor.

“The opportunity to build this now is very tempting,” she said, adding that she experiences the potholes on the eastern end of Front Street like other residents. “It’s not that I don’t understand, but there are a lot of competing priorities when you look at all of Del Norte County for this funding source. I encourage the city to ask for what they need and to see how it comes together.”

The Del Norte Transportation Commission’s technical advisory committee will meet at 2 p.m. Tuesday in the community room at the Wastewater Treatment Plant, 210 Battery Street in Crescent City. To register for Zoom, click here.