« Crescent City's Front Street Project Could Get $750,000 Boost From the Feds 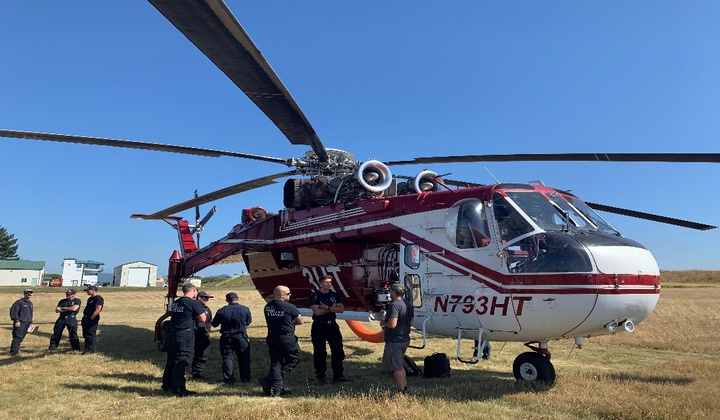 Calfire added a CH-54A Sky Crane helicopter to its air attack base in Rohnerville. | Courtesy CalFire

From a Calfire news release Monday:

Rohnerville – Starting today, Monday, July 25, 2022, a CH-54A Sky Crane Helicopter will be based at the CAL FIRE Rohnerville Air Attack Base (RAAB). The helicopter is one of ten Type- 1 (the largest water dropping capacity, Type- 4 being the smallest) helicopters added to CAL FIRE’s statewide aviation assets through exclusive use contracts. These helicopters will be used by CAL FIRE for initial attack and extended fire attack through mid-November, with an option to stay on longer if fire activity dictates.

This CH-54A, call sign 3HT or “Three Hotel Tango,” has a 2,650 gallon fixed tank that can carry water or fire retardant. The tank also has the ability to make split load drops, allowing the flight crew to adjust drops to best suit the fire and fuel conditions on the ground.

With the addition of 3HT, there are now two Type-1 helicopters at RAAB with the second Type-1 contracted by the Six Rivers National Forest. The regularly stationed RAAB aircraft, Air Attack 120 (the command and control platform for fire aviation operations) and Tanker 96 are still available at RAAB. Also, in the Humboldt – Del Norte Unit is Kneeland Helitack with a Type-2 helicopter with firefighting handcrew and water dropping bucket, stationed at the Kneeland Helitack Base in Kneeland