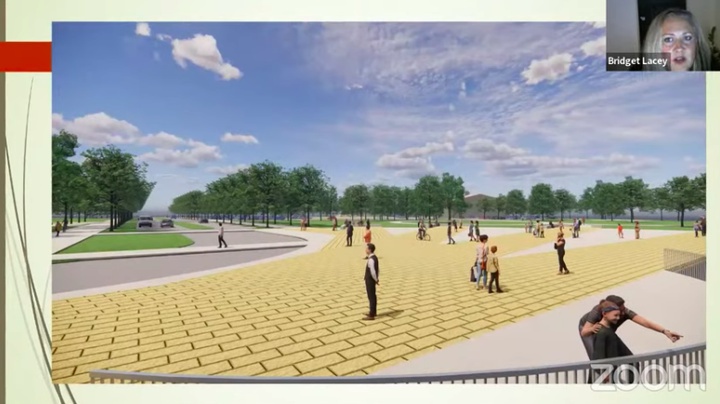 City Manager Eric Wier found out about a week ago that Crescent City had won a $3 million Rural Recreation and Tourism Grant in addition to the $5 million Statewide Park Grant it won late last year.

On Tuesday, Wier said he was working on amending the existing contract with Greenworks PC to design the waterfront plaza and amphitheater.  This will ensure the overall project, which also includes the expanded KidTown, Tolowa cultural interpretive area, a bike pump track and park entry, is seamless, he told the Wild Rivers Outpost.

The design team will take public input on each component of Beachfront Park before their work is finalized and construction begins, Wier said.

“We will have public meetings and they’ll be able to explain what they’re thinking about some of the different options,” Wier said. “That is written into the scope of work as well. They will have completed a lot of research and then be able to put their ideas together and come back to the community, come back to the Council, and then finalize some of the different pieces and move forward on a final design.”

Crescent City Mayor Jason Greenough and Councilor Blake Inscore announced the city’s second big win related to Beachfront Park on KCRE last week. Inscore, who has been on the City Council for about eight years, said in winning this grant, he and Greenough will be able to see the park’s new amenities be built.

“The design of all of this going on in the park is going to happen next year in 2023,” Inscore said. “Shovels are going to go in the ground in 2024 and we’re going to see a major transformation take place in Beachfront Park.”

Crescent City staff began conducting public outreach in 2019. Its goal was to not only be awarded about $177,952 in non-competitive Prop 68 dollars, but to be eligible for up an $8.5 million Statewide Park Program Grant.

Crescent City had applied for $8.5 million in Statewide Park Program Grant dollars and received $5 million in December 2021. However, according to Wier, the city built upon that $5 million win to pursue the Rural Recreation and Tourism Grant.

The city will use the $177,952 to pay for the Paths of Culture piece, which focuses on Crescent City’s history of logging, tourism and fishing as well as celebrates its sister city relationship with Rikuzentakata, Japan.

Construction is expected to begin in 2023 and last through 2024, Wier said. The Statewide Park Program grant must be spent by 2025, but before the city can break ground it must obtain a Coastal Development Permit.

Though the city has received $8 million in state grant funding for the project, Wier said the city will still have to meet the California Coastal Commission’s conditions before building the amenities at the park. Wier said city staff has already begun communicating with the Coastal Commission to expedite the permitting process.

“Fortunately with this, the park it’s all fill that was brought in in the late 60s and so it’s not native,” he said. “It should be an easier permit process.”

Wier pointed out that more than $10 million will be infused in the area of both Beachfront Park and Front Street. The includes $4 million in Community Development Block Grant dollars that paid for a storm drain replacement project and the reconstruction of the west side of Front Street.

However, the last few blocks of Front Street to U.S. 101 remains a barrier to people enjoying the park, Wier said. Crescent City, in partnership with Elk Valley Rancheria, had pursued an $11 million federal Rebuilding American Infrastructure with Sustainability and Equity (RAISE) grant to extend the Front Street reconstruction to U.S. 101, but found out that its fourth application had been denied.

Wier noted that the $8 million in Proposition 68 dollars can only be used for the park, but will make the city more competitive for other grant funding to pay for Front Street. He said Crescent City-based Stover Engineering is working to get that project ready for construction.

“The next funding opportunity, we can say we are ready to go and we have plans that we can bid shortly,” Wier said.