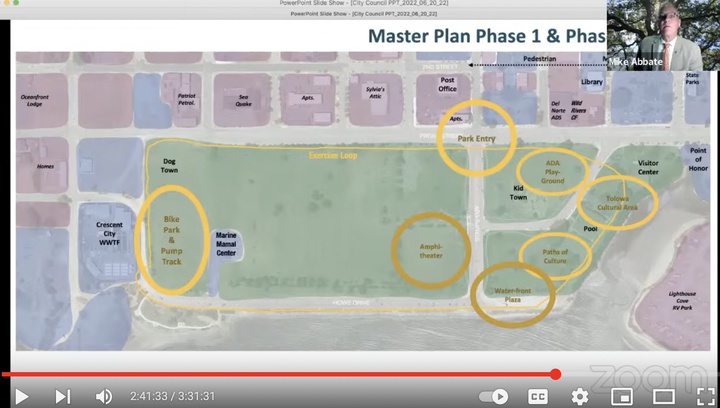 Mike Abbaté, project lead for the design of Beachfront Park, show the components of the expanded park his team will be responsible for. | Courtesy Greenworks PC

The Portland-based firm has assembled a team that includes a playground designer, interpretive specialist, a bike park designer and an expert in environmental permitting. This team will design the specifications for a new bike pump track, an expanded KidTown, the Tolowa cultural center and Paths of Culture areas and a new entryway to Beachfront Park.

If Crescent City’s application for a $3 million Rural Recreation and Tourism Grant is successful, this team will also design the park’s waterfront plaza and amphitheater, said Mike Abbaté, of Abbaté Designs and overall project lead.

“We’re park specialists, accomplished at helping communities create public spaces to help catalyze economic development and downtown revival,” Abbaté told the Crescent City Council on Monday. “We’re especially enthusiastic about the community’s support to recognize the significant role played in the region and the Beachfront Park site by the Tolowa Dee-ni’ Nation, the Elk Valley Rancheria and other Tolowa peoples, and we’re grateful for the opportunity to work with the Cultural Committee in this effort as we move the park project from an idea into reality.”

Crescent City Councilors on Monday also appointed councilors Blake Inscore and Beau Smith to an ad-hoc committee as the design and build-out of the new Beachfront Park continues. According to Wier, the Cultural Committee as well as Del Norte Trail Alliance founder Joe Gillespie and proponents of the bike pump track will also continue to work with the designer.

In 2019, Crescent City began holding public workshops to pursue funding for Beachfront Park through Proposition 68, the Park, Environment and Water Bond. Approved by California voters in 2018, the proposition authorized $4 billion in general obligation bond dollars for state and local parks as well as environmental infrastructure and flood protection projects.

Using $90,000 from the California Coastal Conservancy, city staff contracted a firm to update the Beachfront Park Master Plan and sought further input from the community. On Monday, City Manager Eric Wier said it was due to this community input that the state awarded Crescent City the $5 million Statewide Park Program Grant in December.

Crescent City also received $177,952 in non-competitive Prop 68 dollars, which Councilors allocated toward the Paths of Culture project. This part of the park will tell the story of the area’s original inhabitants as well as its history of mining, logging and fishing and will be near the Tolowa Cultural Interpretive Area as well as the Fred Endert Municipal Pool. 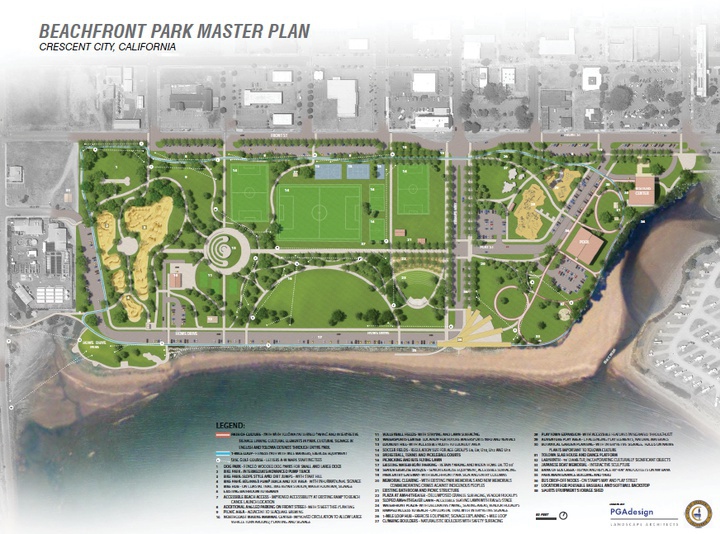 This revised Beachfront Park master plan calls for a bike park, cultural area and an expanded KidTown. | Courtesy of PGAdesign

According to Wier, the committee interviewed several top landscape architects for the project but were impressed with Abbaté’s experience as the director of the Portland Parks and Recreation department.

“With Mike’s time in Portland, the parks received a gold medal from the National Recreation Parks Association as the best managed municipal park system in the country,” Wier said, adding that the committee was also impressed with Susan Jurasz, an interpretive specialist with Sea Reach, who’s worked for the National Park Service as well as tribes. “It ended up being a unanimous decision to select Greenworks and its project team. That was all done without opening the actual fee proposal. We then opened up the fee proposal and it was in line with what we have in the budget.”

In addition to Jurasz, Greenworks’ design team for Beachfront Park includes the firm’s principal, Paul Agrimis and playground designer Ben Johnson, who also works with Greenworks. Local engineer Ward Stover is also on the design team as is Megan Bradley, of Velosolutions, a national expert on bike park and pump track design.

Meanwhile Matt Robert, of Camas LLC will help get the project through California’s environmental permitting process. According to Abbaté, Robert helped get the necessary permits for the dam removal project on the Klamath River.

“We know that building a beautiful park is a challenge, but we also know, as Eric mentioned, another challenge is maintaining that beautiful park in the same condition over time,” Abbaté said. “A beautiful park without a maintenance plan is doomed to failure and ensuring new parks are maintainable is one of the reasons Portland received the gold medal Eric mentioned. We want this park to look great when it opens, but we want it to look even better 10 years later when the plants mature and it gets even more use.”

According to Inscore, it was Jurasz’s experience and philosophy to interpretive design that was an integral part of his vote to go with Greenworks PC.

Jurasz said she has been in interpretive design for more than 35 years and learned that the most special places are those where the interpretive component is designed in combination with the landscape architecture.

“I can tell the difference between when that synergy has occurred at the ground level and when we are asked to come in and just plop the stories on the landscape after the fact,” she said. “I feel very excited and very honored to be part of this team, and I’m looking forward to working with the Tolowa people. We do a lot of tribal interpretation. There are a lot of stories to be told, there’s a lot of hurt to be healed. I think one of the things unique in our team is they put aside some money so we could actually pay the tribal consultants we’ll be working with.”

Crescent City Bay was once the site of the Tolowa village, Taa-‘at-dvn, which was attacked by white settlers in 1853.