« Rec Swim at Fred Endert Pool Will Resume This Weekend 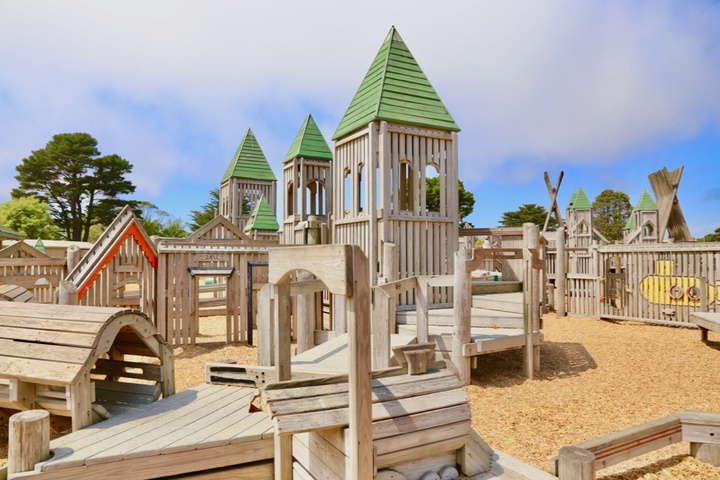 The city plans to use a $5 million grant to expand KidTown and add other amenities to Beachfront Park. File photo: Andrew Goff

Thanks to a $5 million Statewide Park Program Grant, the city can build a bike park, double the size of KidTown, create a one-mile long path that’s accessible to wheelchairs and tell folks the true history of the community and the people who live here.

“This might be the single biggest grant award the city has ever received — at least in my time with the city,” Wier told the Wild Rivers Outpost on Wednesday. “My hat’s off to our community. Without them, without that public engagement — it was such a big part of this grant application — we would not have been funded.”

Del Norters, including those living outside Crescent City limits, shouted out their visions for an expanded Beachfront Park to city staff in workshops and public meetings date back to September 2019. At that time, Crescent City was pursuing a $200,000 non-competitive Proposition 68 grant.

In September 2020, in the midst of the COVID-19 pandemic, city staff resumed public workshops via Zoom urging residents to propose potential amenities it could use to pursue a competitive Proposition 68 grant.

Proposition 68, the Park, Environment and Water Bond, was approved by California voters in June 2018. It authorized $4 billion in general obligation bond dollars for state and local parks as well as environmental infrastructure and flood protection projects. 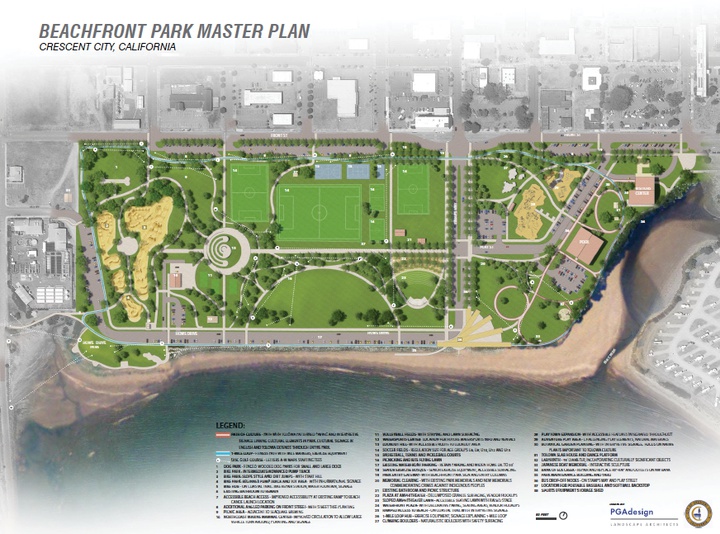 This revised Beachfront Park master plan calls for a bike park, cultural area and an expanded KidTown. Courtesy of PGAdesign

After receiving a $178,000 per capita Proposition 68 grant, Crescent City pursued the competitive Proposition 68 grant. The city applied for $8.5 million, according to Wier. The state said they could provide $5 million for an expanded Beachfront Park.

In addition to crediting the community, Wier especially commended the Tolowa Dee-ni’ Nation and Elk Valley Rancheria for their collaboration. He noted that the park’s cultural area seeks to remind Del Norters and inform visitors that Crescent City was once called Taa-‘at-dvn and that its original inhabitants experienced trauma from the non-natives who settled in the area.

“And then you take a walk into the community and where we are today with the sister city, with the history of mining and lumber and fishing and of all that really builds to the community we have,” Wier said, referring to the tile puzzle mosaic mural that will be constructed to commemorate the sister city relationship between Crescent City and Rikuzentakata, Japan. “To have that sort of immersive experience in Beachfront Park could be really special.”

According to Wier, the city’s successful Statewide Park Program Grant application could help it obtain a Rural Recreation and Tourism Grant, which is also offered with Proposition 68 dollars.

“With this funding what we can then do is apply for up to $3 million and with that show we have this skin in the game, so to speak,” Wier said. "Our match is going to be this $5 million and this $3 million will go to completing the project that’s already underway.”

Grant applications for the Rural Recreation and Tourism program is due Jan. 20. The grant will fund the construction of parks, according to the California Grants Portal. It could be used for the development or acquisition of land.

According to Wier, the city is pursuing $3 million to build out the amphitheater and water front plaza at Beachfront Park, both of which are included in its master plan.