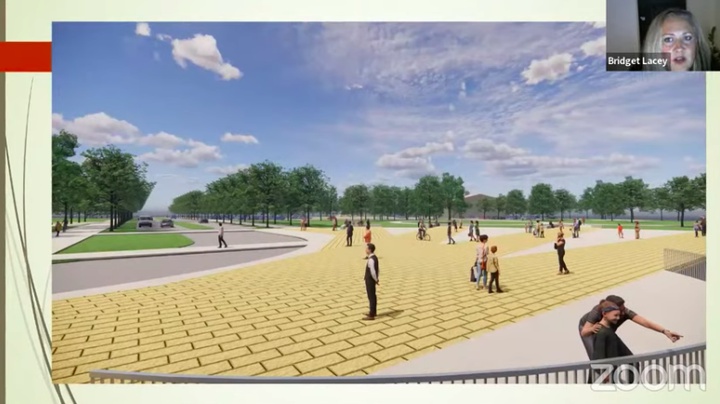 After winning $5 million to expand KidTown, build a bike park and tell the story of the Tolowa people, Crescent City will pursue another $3 million as it continues to realize its vision for Beachfront Park.

If it’s successful, the city will use the $3 million in Proposition 68 Rural Recreation and Tourism grant dollars to build the amphitheater and waterfront plaza residents said they wanted to see included in the Beachfront Park Masterplan back in 2019.

“Since this grant is geared toward economic development and tourism, we felt the Beachfront Park features that would best fit this application would be the amphitheater and the waterfront plaza,” Bridget Lacey, the city’s grants and economic development coordinator, told Councilors on Tuesday.

“The amphitheater will provide the culture and entertainment piece visitors are more accustomed to in bigger cities and give them a reason to extend their stay," she said. "The primary goals of the (Waterfront Plaza) are to promote social gathering, provide an area to enjoy the views and space for eating. It will also serve as the feature to guide visitors to the beach and lets everyone know they’ve arrived.”

Councilors unanimously approved the city’s grant application, which is due Thursday. Award announcements are expected this spring and the project must be closed out by March 31, 2025, according to Lacey.

If the city’s grant application is successful, the amphitheater will include a sloped grass seating area, handicap accessible parking, lighting and vendor hookups, according to Lacey. An engineered high-wind safe canopy and its supports are removable during inclement weather, and there will be trees for shade and shelter.

“As far as economic development goes, we see this feature being able to bring in direct and indirect revenue generated by the events hosted in this space,” she said. “We expect there to be jobs and revenue created for local organizations who host events. And we expect to see indirect revenue to our local hotels, restaurants and gift stores as a result of the events.”

The plaza will offer the safest access to the beach and will be situated between two parking areas to support large public events, Lacey said. The plaza will also offer panorama views of the mountains, ocean, lighthouse and harbor, she said.

“The ability to offer food and crafts at this location will make the space a great finish line for events such as disc golf tournaments, the tsunami run, the zombie run and the triathlon,” Lacey said. “It will also open doors for regional foodie events such as crab races, oyster festivals, local brews and blues, Bigfoot barbecue cook off and cheese festival. This feature also has the potential to accommodate a future farmers market providing local vendors another opportunity to sell their goods.”

According to City Manager Eric Wier, if the city is successful, the $3 million would be added to the $5 million in Statewide Park Program grant dollars it was awarded in December. Both those grants, along with a $177,000 per capita grant, was allocated to Crescent City through Proposition 68, the Parks and Water Bond Act of 2018.

Obtaining the $3 million grant will be more difficult, according to Wier. It’s more competitive than the previous grants, and the State of California has only allocated $23 million in this grant cycle, he said.

Another grant Crescent City is pursuing, a California Coastal Conservancy Coastal Stories grant, will expand upon the Paths of Culture area in Beachfront Park, according to Lacey. It will incorporate indigenous plants and include informational displays about the Tolowa people’s history and their vision for the future, she said.

“Historical information will begin with carbon dating information going back 12,000 years and will include their version of the 1853 events that tell the story of the second largest massacre recorded on American soil and their resiliency through trauma and oppression,” Lacey said, referring to the Yontocket massacre near the mouth of the Smith River. “Displays will also celebrate the success and important values of these people and will encourage visitors and residents to be good stewards of the park.”

Pre-proposals for the Coastal Conservancy grant is due Jan. 31.

Though the Crescent City Council wouldn’t be required to approve a resolution for the Coastal Conservancy grant, Councilor Blake Inscore urged Wier to place the item on the agenda for next Monday. Inscore said he also wanted the cultural trails area at Beachfront Park to tell the story of an internment camp that pre-dated Battery Point Lighthouse and housed a large group of Tolowa.

“I still believe we have a responsibility to do a better job of telling the history of our area,” Inscore told the Wild Rivers Outpost on Wednesday. “And I believe people who are traveling, they want to read that. I think they want to know the whole story.”

During public comment, resident Maggie Rasmussen brought up the proposed labyrinth design that had been called for in the Beachfront Park Masterplan. She said she was also concerned about a Monterey cypress tree in the park that’s slated for removal.

“I’ve been doing some research on it and that’s a heritage tree,” Rasmussen said. “It could be pruned up and cleaned up and it could be saved.”

Wier said the labyrinth is slated for the Paths of Culture section of the park that will include the sister city monument. However, the city doesn’t have enough funding to build the labyrinth despite a $7,617.91 donation from the Beachfront Park Labyrinth Project group.

As for the cypress tree, Wier said reviewed a report from a local arborist, who recommended the tree be removed for safety reasons.

“He did perform some core analysis on that particular tree and it does have rot in the core,” Wier said. “Myself, the Council share the same views, this is a beautiful tree and it’s pretty in the park. But unfortunately because of the core rot and age and other components, it is a serious safety concern.”