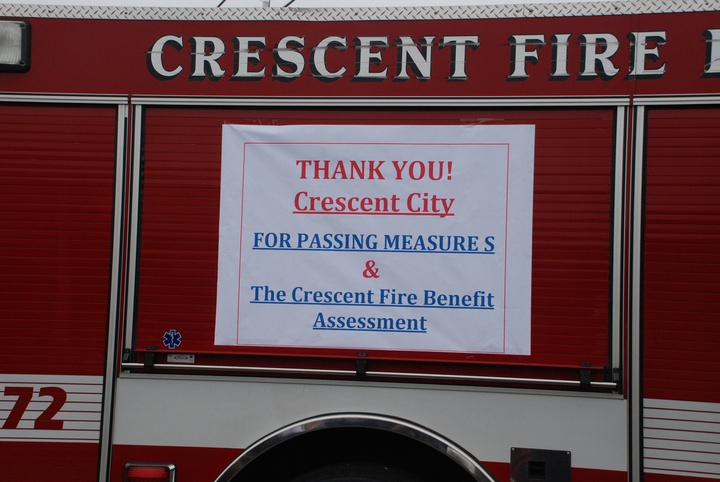 A poster on a Crescent Fire Protection District engine at the this year's Fourth of July parade. File photo: Jessica C. Andrews

Harbor commissioners realized the district hadn’t received those ballots — worth about 65 weighted votes — just before the June 14 deadline to submit them, Harbormaster Tim Petrick told the Wild Rivers Outpost on Thursday. Commissioners contacted the Fire Protection District following the deadline to find out the ballots had been returned to the sender.

According to Petrick, the Fire Protection District sent the Harbor District a list of voters and addresses and images of the Harbor’s returned ballots.

“There was no visible postmark and the ballots were properly addressed,” Petrick told the Outpost via email. “They were marked, ‘Return to sender, property is vacant.’ The date of the return to sender label was 14 days after the election. This means our ballots were missing for approximately 53 days prior to (being) marked return to sender.”

The Harbor District filed its lawsuit on Saturday, according to Petrick.

However, the fire protection district has yet to be served, Fire Chief Bill Gillespie told the Outpost on Thursday. Gillespie said he couldn’t comment on pending litigation until he receives direction from the Fire Protection District’s legal counsel.

The results were almost the opposite of what it had been following the initial ballot tabulation on June 15. According to the Crescent Fire Protection District, based on the June 15 count, the value of ballots opposing the benefit assessment outweighed the yes value by $19.20.

The Fire District’s narrow victory came after a similar attempt in October 2020 failed by 23 votes.

The Fire Protection District Board of Directors on June 17 had called for the ballots to be counted again after one with a yes vote was accidentally sorted into a pile of ballots that opposed the assessment.

On June 17, Del Norte County Clerk Alissia Northrup said her office had received a total of 1,760 Fire District ballots to count. Of those, 26 were not acceptable because the property owner either didn’t sign their ballot or failed to mark a yes or no vote, she said.

Northrup said she counted 1,734 “good ballots” on June 15. The miscount was due to human error, she said.

Parcel assessments would be capped at $1,000, which would apply primarily to large commercial and multi-unit residential properties.

According to Petrick, the Crescent City Harbor District Board of Commissioners voted against the Crescent Fire Protection District’s first benefit assessment effort in October 2020. During the most recent attempt, Harbor Commissioners didn’t discuss the vote before the June 14 deadline to submit ballots because “we had no ballots to discuss a vote on,” Petrick said.

“(They) confirmed that it was abnormal for it to take 53 days to be marked return to sender and for it to have been marked as vacant,” he said.

Though it had approached the Crescent City Council, the Del Norte County Board of Supervisors and Del Norte Unified School District with information about the benefit assessment and in hopes to gain support, Crescent Fire Protection District representatives did not go before the Harbor District Board of Commissioners, Petrick said.

“When discussing the missing ballots, the board expressed opposition to the assessment,” he said.

Petrick said he was informed by county resident Linda Sutter, and has since confirmed, that a total of 229 ballots were marked “return to sender” in the Crescent Fire Protection District’s second benefit assessment attempt.

“I won’t go as far as to say that the Fire District broke the law and denied us our right to vote. The Harbor District wants our right to cast our vote and we want everyone in our community to be able to exercise that right as well,” Petrick said. “Many coincidences seem to have come together to create this issue and it becomes difficult to believe the proper procedures were followed and it happens to have favored the Fire District.”

Petrick said the Harbor District urges those who “feel they weren’t given the fair chance to cast their vote” to reach out to their attorneys, Avi Rutschman and Richard Egger.