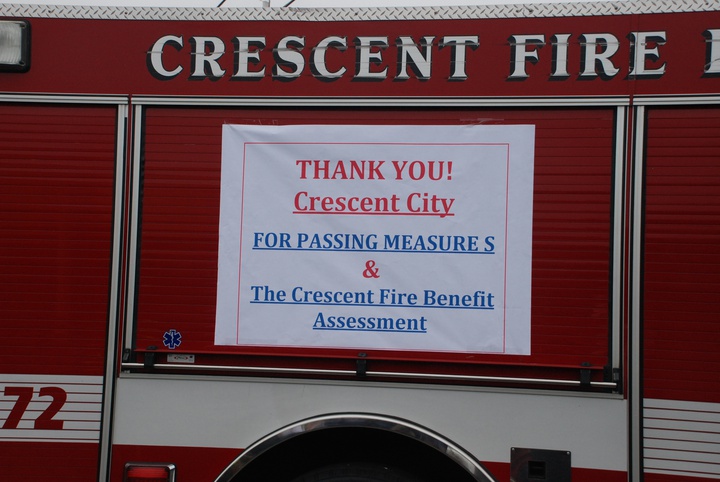 A poster on a Crescent Fire Protection District engine at the this year's Fourth of July parade. Photo: Jessica Cejnar

Rick Kelley had a two-word response to allegations that the Crescent Fire Protection District had gone forward with its proposed benefit assessment vote improperly — “tough bananas!”

Kelley and his colleagues on CFPD’s Board of Directors on Monday certified the results of a recount of benefit assessment ballots that showed the fire district achieved a narrow victory of $17.80 over ballots protesting the assessment.

The certification came amid renewed threats of lawsuits, recalls and pleas to “sit down with the opposition and hammer out a deal” from former supervisor Roger Gitlin, Thomas Barnes, owner of the real estate company, TAB & Associates, and county resident Linda Sutter.

Kelley took issue with allegations that the Crescent Fire Protection District went forward with its benefit assessment effort without proper public input. He said he also wasn’t interested in starting the process over.

“If we had failed as the original vote started to indicate, if we had failed, there would be none of you all concerned about the process and how it went on at this point,” Kelley said. “We wouldn’t even be hearing from you and we’d be sitting here figuring out how to go forward in the next five (or) 10 years and still have a viable department.”

The Board of Directors also voted 4-1 to approve the ordinance that levies the new benefit assessment starting in fiscal year 2021-22.

Director Jim Erler dissented, though during the discussion about certifying the ballot tabulation, he said a suggestion that the fire protection district live off its reserves for two years wasn’t a possible solution.

“Our reserve fund is limited and we need that for emergencies,” he said, adding that the reserve helps the fire department replace equipments and turnouts and helps pay for vehicle repairs. “If an engine needs to be repaired, we have to take it to a certified mechanic, we can’t take it to George’s or Joe’s or a couple guys across the street. That reserve fund, if it’s depleted, you won’t be able to do what’s mandated that we do like turnout replacement or repair the engines, it’s just not feasible.”

The Crescent Fire Protection called for a recount on June 17 after one ballot with a yes vote was accidentally sorted into a pile of ballots that opposed the assessment. Del Norte County Clerk Alissia Northrup said the miscount was due to human error.

Property owners within the district had submitted their ballots by the end of a public hearing June 14.

Staff with the Del Norte County Elections Office, with members of the public looking on, tabulated the ballots on June 15.

Conducted by the Del Norte County Elections Office on June 28, the results of the recount showed $72,503.80 in favor of the assessment and $72,486 opposed to the assessment, according to Fire Chief Bill Gillespie.

Gillespie noted that the vote is tabulated based on the assessed monetary value of each of the different property classes in the district, which include residential, multi-family, mobile home and commercial properties. Owners of undeveloped parcels, which wouldn’t be assessed, didn’t receive a ballot, he said.

The new benefit assessment of $74 for a single-family residential property will take effect in the fiscal year of 2021-22. That assessment replaces an $18 assessment from 2006 that sunsets at the end of the year, according to Gillespie.

Coupled with a $24 assessment from 1987, property taxes going toward the fire district from single-family residential homes would be $98 per year, according to Gillespie. Parcel assessments would be capped at $1,000, which would be applied to large commercial complexes and multi-unit residential properties, he said.

The new assessment is expected to generate $421,404 annually, Gillespie told CFPD directors on Monday. That revenue would help the fire district realize a 10-year master plan to meet a growing number of service calls that include creating a hybrid department of paid and volunteer staff.

“The unofficial results showed 1,734 ballots were received out of 5,253 ballots mailed — roughly a 33 percent return rate,” Gillespie said. “There were 26 ballots that were invalid due to no signature or no marked vote.”

According to Gillespie, results of the recount on June 28 showed that 1,738 ballots were cast out of 5,253 ballots mailed. Twenty-six were still invalid due to no signature or no marked vote, he said.

According to Northrup, four property owners had requested a change to their ballot. The CFPD honored that request at the June 14 public hearing, she said.

“They were all yes votes and every one of them lowered their EBU count,” Northrup said, referring to their property’s equivalent benefit unit, which was how the vote was tabulated. “So it actually lowered the yes value.”

Both Gitlin and Barnes had a problem with the $1,000 cap in the proposed benefit assessment.

“We need fire services, we need emergency care services, no one disputes that,” Gitlin said. “But the level and the manner in which you are evaluating votes is clearly unfair and punishes the average taxpayer in the district.”

In response to Kelley’s “tough bananas” comment, Barnes accused the CFPD Board of Directors of not doing their job right and representing the public right. The margin between the ballots in favor of the benefit assessment and those proposed is statistically insignificant, he said, adding that a previous attempt failed in October.

“It’s easy to see the attitude to the public you serve as you said to us, the public, it’s just ‘tough bananas,’ Barnes said, promising the Board of Directors that they haven't heard the last of this. “Even with all the submitted rationale on why it should be re-evaluated with public input and done correctly, it’s just ‘tough bananas….’ I’ve got a comment for you fellas, you’re not doing your job right and you’re not representing us right as your representatives. It’s tough bananas today? Let’s see what the future holds.”

"I'm getting ready to recall each and every one of you. You'll be paying for the recall," she said. "There's going to be a lawsuit over this because none of it was done right."

“At no time do I feel that you guys even took public comments seriously,” he said. “I believe you already had your minds made up before you sat down on Zoom meetings, and if you didn’t, to those individuals, I apologize.”

Board Chairman Jim Nelson, noting that he was a Crescent Fire Protection District firefighter for 29 years before he was on its Board of Directors, said he and his colleagues are doing the best they can to save the taxpayers money.

He also pointed out that the department’s volunteer firefighters put in a minimum of 69 hours a month for training, some put in extra time washing trucks and cleaning the fire hall.

“Sometimes they go on a fire for two, three, four hours and they still make it to work in the morning. That’s called devotion,” Nelson said. “Every penny of this money, the $98 taxpayers are paying, goes to the fire department. It does not go to the county or anywhere else. It comes down to $8.17 a month or 27 cents a day.”