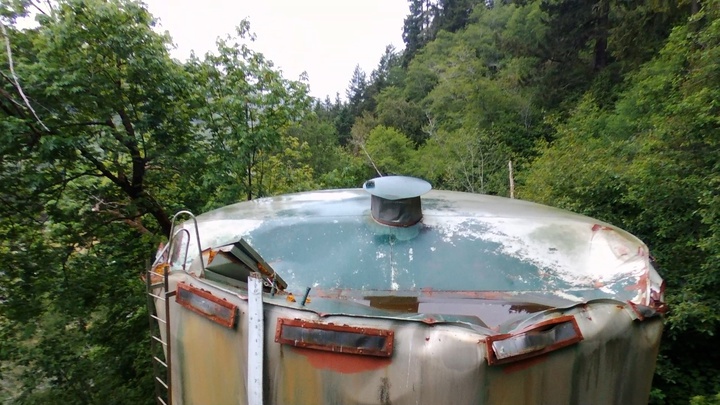 • Water Filters Donated to More Than 900 Yurok Households; KCSD Board President Says Lab Sample Of System Shows 'It's Absent of Anything That Would Harm Anybody'

A boil water notice issued to Klamath Community Services District customers in July will remain in effect until KCSD representatives can repair or replace a water tank that sits on Yurok land, according to the district’s general manager.

But the district’s efforts to get a utility easement or land-use permit from the tribe granting access to the tank have been unsuccessful, KCSD’s general manager and president, Margaret Caldwell told the Wild Rivers Outpost on Wednesday.

Test samples of the the district’s water system continue to come up “negative for anything” harmful, Caldwell said.

“This particular boil water notice will stay in effect until we can prove to the (California) Division of Drinking Water that we have repaired the tank or replaced the tank,” she said. “We have asked for a utility easement, asked for a land permit, but every one of them have come up with complications that the water district feels they cannot sign due to the stuff that’s in them.”

When asked if KCSD would seek legal action against the Yurok Tribe to obtain a land-use permit or utility easement, Caldwell said the district’s legal team was working on that. 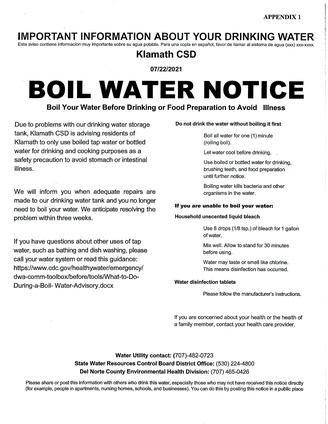 The Klamath Community Services District is a special government district tasked with providing water and sewer service. According to Caldwell, KCSD serves about 64 customers, most of whom are in the Klamath Town Site. However, due to a lack of capacity, it has been unable to accommodate additional hookups to its sewer system since 2006, Caldwell said.

In July 23 press release, the Yurok Tribe notified its members of the state’s order to KCSD to issue a boil water advisory due to violations of the California State Drinking Water Act. Those violations stemmed from the condition of the district’s water storage tank, which was damaged in 2017 when a dead tree fell on its roof, according to the Yurok Tribe’s press release.

Though the district had “temporarily fixed the tank,” it hadn’t performed any maintenance, the tribe stated. In its release, the tribe alleged that despite receiving insurance funds to replace the damaged tank and offers from the Yurok Tribe to buy an additional tank, KCSD has not installed a new reservoir.

In its own news release issued Sept. 3, KCSD stated the land the tank has sat on for about 40 years had belonged to the U.S. Forest Service, which required a land-use permit for the district to make any repairs to the tank. That land now belongs to the Yurok Tribe, according to the KCSD’s news release.

“Now, the land (and road) belongs to the Yurok Tribe, who, for years, has been uncooperative to provide the same permit without strings attached or endangerment to KCSD resources,” the district stated. “Until KCSD can provide said permit from the landowner, granting access to repair and maintain the tank, neither contractors nor staff can be hired and-or insured to provide mandatory repairs.”

KCSD stated that the July boil water notice stems from a May 19, 2021 complaint the Yurok Tribe planning director filed with the Environmental Protection Agency against the district.

In its statement, KCSD accused the Yurok Tribe of distributing the boil water notice along with bottled water as part of a public relations campaign to “provoke reckless panic within the KCSD community.”

The Wild Rivers Outpost reached out to Yurok Tribe staff and councilmembers numerous times in the days since Sept. 3 to ask for a response to KCSD’s claims. As of this writing, we have received no response.

On Wednesday, Caldwell said when the tree fell on the water tank, KCSD staff sealed it to protect it the water quality while debating with the insurance company. She said KCSD representatives found out from its insurance provider that it wouldn’t cover district staff since it did not have an easement or a land-use permit from the Yurok Tribe, which owns the property.

Since the July boil water notice, KCSD has had to give a timeframe to the California Division of Drinking Water for when they will repair the tank. She said the date they gave to the state drinking water division was 2026 because “the problem is still getting permission to get up on the property and having everybody insured.”

“Our employees are not insured to go on that property,” she said.

According to KCSD, efforts to repair the tank date back to June 15, 2018 when the district’s present sent a letter to then-Tribal Chairman Thomas O’Rourke. The letter notified the tribe that the tank needed major repairs and asked the tribe to provide a utility easement.

“The letter went on to state that the KCSD ‘cannot guarantee that the water the KCSD provides would continue to be safe to drink until the repairs were made,’ and that a boil water notice due to bacterial contamination would have severe impacts on the local economy and may pose a health risk to the community,” KCSD stated.

KCSD sent a letter to O’Rourke’s successor, Tribal Chairman Joseph L. James, repeating its request for tribal assistance in getting the tank repaired. According to the KCSD news release, the district asked a Yurok Tribe water technician to reseal the tank to protect water quality until repairs could be made.

According the district, the Yurok Tribe’s legal representative asked about the needed repairs to the tank, but the tribe has taken no action.

According to the district, their conflict with the Yurok Tribe over the water tank is part of a history of disputes dating back to 2012 when the tribe built its 3500 square-foot justice center and when the Redwood Hotel and Casino was under construction.

These disputes include ones over what the KCSD characterizes as "illegal" hookups of Yurok Tribal facilities to their sewer and water systems, according to the district.

According to Caldwell, the KCSD is a small district that relies primarily on volunteers to serve its customers. The district’s paid staff includes a bookkeeper and a field operator who works up to 60 hours a month, according to Caldwell.

Caldwell said the district is pursuing an engineering grant to expand its sewer system as well as its water system which has been in place since the mid 1960s.