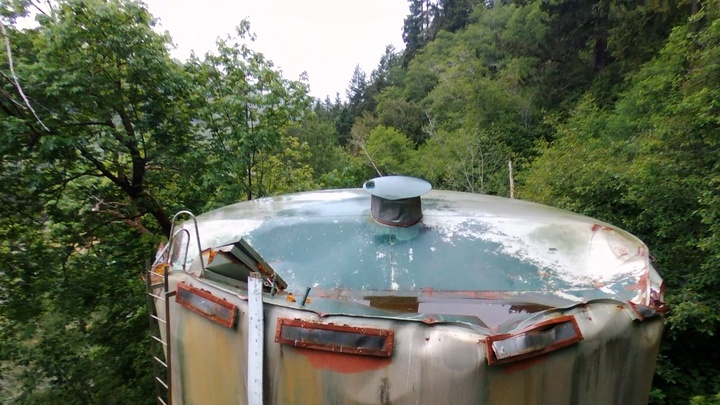 From a Yurok Tribe news release:

The violations stem from the condition of the KCSD’s water storage tank in Klamath. The tank was severely damaged in 2017 when a portion of a dead tree fell on the roof of the reservoir. The KCSD temporarily fixed the tank, but has not performed any maintenance on the repairs, “which creates a significant sanitary risk to the drinking water customers,” according the state water board. Shortly after the 2017 incident, the Services District received insurance funds to purchase a new tank. The Yurok Tribe also offered to pay for an additional tank to supplement the system while the replacement is installed, but the KCSD refused to accept the funds and has not installed the new reservoir.

“The Yurok Tribe is concerned about the integrity of the Klamath Community Services District’s antiquated drinking water system.  The Tribe has done everything possible to help the KCSD fix these problems. We have offered nearly $1 million, plus staff time, to install a second drinking water tank and permanently increase storage capacity, but the KCSD Board of Directors refused our assistance,” said Joseph L. James, Chairman of the Yurok Tribe. 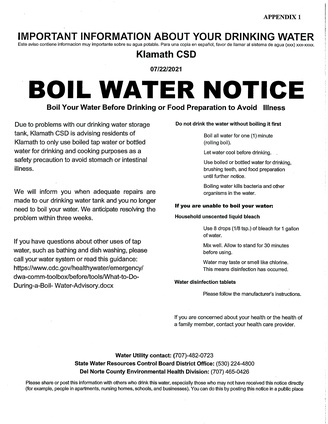 In anticipation of potential drinking water shortages arising from this year’s historic drought, the Yurok Tribe has stockpiled emergency supplies for the community. This afternoon, tribal staff delivered cases of bottle water to nearly 100 residents impacted by the boil-water notice in the Klamath townsite. On Monday, the Tribe will be distributing high quality water filters, which connect to a standard kitchen sink faucets and make water safe to drink even with the boil-water notice. Community members who use the Sawyer-made filters will be able to safely drink from the tap. Donated by the Dreamcatcher Foundation, the durable devices last for years if properly maintained. Here is additional information on how to install and maintain the filters: https://www.youtube.com/watch?v=bkTsvl5lIxE

“We have employed a proactive approach to addressing this year’s drought, and I am so glad we did because we are able to help the community get through this challenge,” Chairman James said.

The Tribe has long been concerned about the quality of drinking water in Klamath. Unbeknownst to the Tribe until only recently, the Klamath Community Services District was issued a citation on May 16, 2019, for violating California’s Clean Drinking Water Act. Naming KCSD General Manager and Board President, Margaret Caldwell, the citation required the Services District to notify its customers about the presence of the harmful Coliform bacteria. The Tribe was not sent a notice, although more than 300 tribal employees work in the half dozen tribal buildings that receive water from KCSD.

In response to the Tribe’s offer of funds and staff time to increase water storage capacity, the KCSD Board has stated that it will not install the new tank without a land use permit from the Tribe. However, the Tribe has provided the board four land use permits. In 2018, the Yurok Tribe secured nearly $1 million dollars to install the second tank, but the KCSD Board of Directors has refused to let the project proceed.

“The new tanks should have been installed years ago,” Chairman James said. “Replacing the severely damaged tank and installing a second reservoir will improve water security for the long term. It will also support the positive growth that is happening right now in our community.”

In addition to failing to replace the dilapidated infrastructure in a timely fashion and rejecting the Tribe’s funds for a second tank, the Service District’s Board of Directors is impeding the installation of a waterline to the Aawok Ada Charles Emergency Operations and Community Center. The line is the last step that needs to be completed before the Tribe can open the state-of-the-art facility. The 20,000 square foot center is the largest piece of community infrastructure constructed in Klamath in the last 20 years. The multi-use building was specially designed to serve as a command hub for Yurok first responders during the COVID-19 crisis. The building contains a conference room for emergency managers as well as ample space for the administration of COVID vaccines and testing. When natural disasters, such as catastrophic forest fires, occur in the future the facility can be transformed into an emergency shelter.

“We have made many attempts to convince the KCSD board to approve the waterline. We encourage the community to tell the KCSD Board to accept our funds for the new drinking water tank and approve the waterline to the Emergency Operations and Community Center for the benefit of the whole Klamath community,” concluded Chairman James.

The Klamath Community Services District meets at 6pm on the third Wednesday of the month.