Water Filters Donated to More Than 900 Yurok Households; KCSD Board President Says Lab Sample of System Shows It's 'Absent of Anything That Would Harm Anybody' 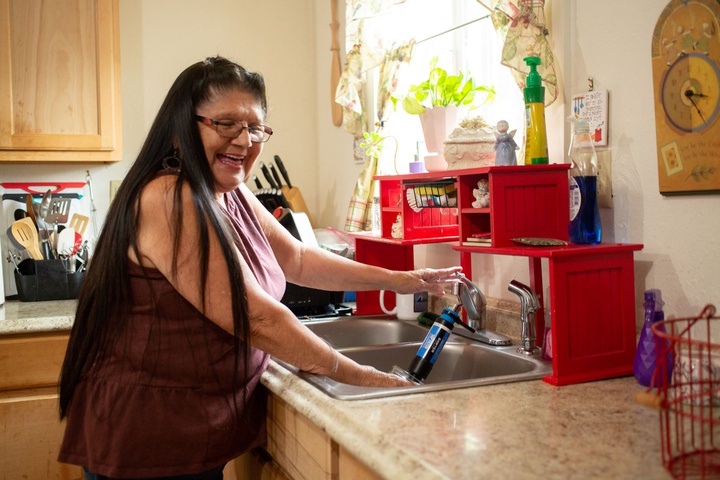 After some of its members were warned to boil water before drinking it last week, every household on the Yurok Reservation received a filter for their tap.

The Yurok Tribal Council and Sawyer Products delivered 940 tap filters to tribal members this week, Sawyer spokesman Ruben Marinbach announced Thursday. The filters are capable of filtering up to 500 gallons of water per day, according to Marinbach.

"The Yurok Tribe owns and operates six water systems on the reservation, all of which have been providing safe drinking water to hundreds of residents for years," he said in an email Friday. "The boil-water advisory is not associated with any of the Tribe’s water systems. The filters will ensure that residents not served by the Tribe will have access to clean water

Filters were installed for Yurok tribal members in Klamath as well as upriver in Weitchpec, Marinbach said. The money for the filters were provided by the Dreamcatcher Charitable Foundation and Water Charity, according to Marinbach.

Sawyer Products donated the filters after the California State Water Resources Control Board on Friday ordered the Klamath Community Services District to issue a boil water advisory to its customers due to violations of the California Clean Drinking Water Act.

According a Yurok Tribal news release Friday, the violations stem from the conditions of the district’s water storage tank in Klamath. The tank had been severely damaged in 2017 when part of a dead tree fell on its roof. KCSD temporarily fixed the tank, but hadn’t performed any maintenance on the repairs, according to the tribe.

On Monday, Klamath CSD Board President Margaret Caldwell said that the same day the boil water notice came out, KCSD received lab results taken from a sampling of the water system on July 19. According to the results, which came from North Coast Laboratories, the sample was “absent anything that would harm anybody,” Caldwell told the Outpost.

A copy of North Coast Laboratory analysis from a sample taken near United Indian Health Services in Klamath shows it to be absent for Ecoli and coliform. Photo courtesy of Kim Lyall-Mamaradlo

Caldwell acknowledged that KCSD, a public agency, received a state order to issue a boil water advisory. The Yurok Tribe received a copy of that order, she said, but “had no authority to distribute the boil water notice.”

“They also took 24-packs of water with the boil notices and made several comments why they were delivering them to tribal members,” Caldwell said. “The problem with them doing it is a lot of the proper people did not get the notification. That’s why the water district is the authority to pass those out because we know who they are.”

When asked who the proper people were, Caldwell replied “everybody that’s on our system.” The Yurok Tribe only delivered the boil water notification to its members, she said.

According to the tribe’s news release, it had been stockpiling emergency supplies in response to potential drinking water shortages as a result of the drought. Tribal officials had also been concerned about Klamath’s drinking water, especially since KCSD had received a citation in May 2019 for violating California’s Clean Drinking Water Act, requiring the district to notify its customers of the presence of coliform bacteria.

On Monday, Caldwell said the tribe never offered the KCSD Board $1 million. However, she refused to elaborate further, saying that it's the board’s philosophy to refrain from issuing statements to “reporting services” until it has had a chance to review and give approval to a press release.

“We haven’t had a chance to sit down with the Board to see what response we want to make to that,” Caldwell told the Outpost.

The Yurok Tribe could not be reached for comment on Thursday.