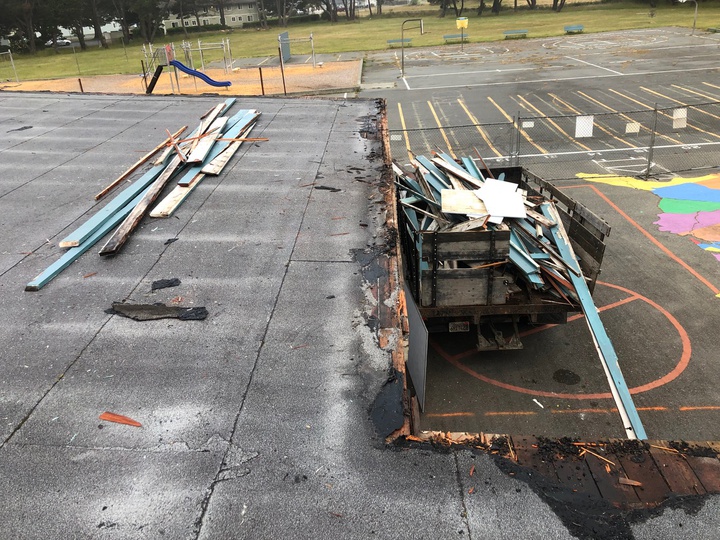 Joe Hamilton Elementary School's roof shows the rot and corosion that comes with being in a damp environment. A renovation project paid for by voter-approved bond dollars was conducted this summer. Photo courtesy of Steve Morgan

Isom recommended the school district try for the November 2022 general election and advised DNUSD to seek support from local stakeholders including other elected officials, business representatives and classified staff and teachers union presidents.

Isom’s presentation was for the DNUSD school board’s information. Trustees have not yet decided whether they will seek voter approval for a bond measures.

The results of Isom’s survey showed improved voter sentiment about a school facilities bond from March 2020. At that time, just before the COVID-19 pandemic forced DNUSD to shutter schools, 50 percent of people surveyed supported a bond measure while 43 percent opposed it, Isom said Thursday.

This year, 54 percent of those surveyed indicated they would approve a school facilities bond measure while 41.7 percent indicated they’d vote against it, Isom said.

They also favored fixing old classrooms and student support facilities as well as ensuring the district’s heating and ventilation systems were up to date, he said.

Less popular was upgrading agricultural and farm equipment for Future Farmers of America students at Del Norte and Sunset high schools, making security and health and safety improvements and repairing parking lots, according to Isom.

“But encouragingly, even with all of that, all of these projects, except for the parking, received better than a 55 percent level of support,” Isom said. “This is important for two reasons: One, we’re able to educate voters and give them an idea of how you might spend their money. Two, it gives you insight into the priorities of the community.”

Isom also told the Board of Trustees that they might consider conducting a tracking poll in the spring to determine if voters’ sentiments had changed.

“To get on the November 2022 ballot, the district has to submit an adopted resolution by the first week in August,” he said. “If we don’t make the November 2022 (election) then it is a reset and will be considered for 2024. School boards don’t get to go in an odd year election, so it would be 2024.”

On Thursday, Morgan said DNUSD has either received or have been pledged $5 million in state dollars for facility upgrades. Another $4.5 million worth of modernization projects has received unfunded approval from the State Allocation Board, he said.

DNUSD is also hoping to get three modernization projects for Mountain, Redwood and Smith River schools approved by the Division of State Architecture and the California Department of Education, Morgan said. If California voters pass a statewide school facilities bond in 2022, DNUSD could receive $8 million in modernization dollars, he said.

In total, DNUSD has the potential to receive $25 million in state dollars for facility upgrades, Morgan said, but it must be able to cover between 40-50 percent of the project costs.

“Without a new local facilities bond for our share, I don’t know how we could realize that potential $25 million of state funds,” he told trustees. “Jon recommended we go out for a $39 million local bond. If you put that together with $25 million, we could really do some great work.”

“Folks are beleaguered,” he said. “They’re worn out. Where is the tax money going to come from?”

Westfall, claiming DNUSD students were being indoctrinated, said that while she wasn’t one of the people polled, she would not support a school facilities bond measure. Referring to the Declaration of Independence — and erroneously stating it was the U.S. Constitution — Westfall said the public has the “right to abolish the Del Norte Unified School District.”

“If the school district is going to continue in operation, you ned to bring back gun safety classes and the importance of the Second Amendment,” she said. “I will not support a $47 million bond. We will do everything we can to defeat it. Your mission is to educate our children and not indoctrinate our children.”