« Crescent City Hopes Cleanup of Property Near Cemetery Will Be A Community Effort; Challenges Include Potential Encounters With Needles, Steep Terrain 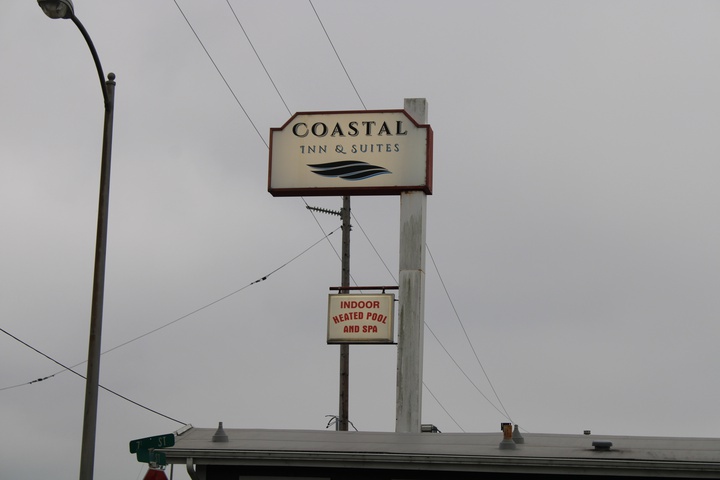 The former Coastal Inn & Suites motel is now the Legacy, a permanent supportive housing program for those who are homeless. File photo: Jessica Cejnar

• County Plans To Use $2.4 Million Grant to Purchase Local Motel, Convert It Into Permanent Housing for the Homeless

Roughly eight months after Del Norte County used state dollars to turn a former motel into housing for the homeless, Crescent City’s police chief reported that the number of emergency calls to the address has increased.

Though the number of 911 calls continues to climb this year, Chief Richard Griffin said the issue has led to a more congenial relationship between his department and the Del Norte County Department of Health and Human Services staff who manage the Legacy.

“I attend weekly meetings as much as I can and we provide them with the calls for service weekly at the location,” Griffin told Councilors on Monday. “We identify the problem children we have. They identify what they have, and we work together to address it. I have nothing bad to say about the relationship.”

Those calls include requests for fire and medical aid, though Griffin noted that CCPD is often dispatched as well and sometimes are the first to arrive on scene.

“This escalation coincides with what staff understands as an increased implementation of services provided by the Del Norte County Health and Human Services Department at this location,” Griffin wrote in his report. “It is staff’s understanding the county primarily utilized this hotel during the early stages of the pandemic (Spring 2020) to implement Project Roomkey.”

After receiving approval from the Board of Supervisors in October, DHHS purchased the 30-unit motel for $2.4 million in Project Roomkey dollars and convert it to a permanent supportive housing program.

For years, DHHS had purchased rooms at motel to offer temporary housing to those finding themselves homeless, Director Heather Snow told the WildRivers Outpost in September.

In May 2020, the motel partnered with the county through Project Roomkey, a state program focusing on getting the homeless out of shelters and off the streets during the COVID-19 pandemic. When she asked the Board of Supervisors for approval in October, Snow said the former motel was housing 43 adults and seven children — roughly 27 percent of Del Norte County’s homeless population, according to data from the U.S. Department of Housing and Urban Development.

On Monday, Roy Jackson, DHHS’s housing services manager, said 24 of the Legacy’s 30 units are full. Since DHHS will be converting the Legacy into permanent housing, which includes adding kitchenettes and ADA features, those rooms will remain empty while that work continues, he said.

“We’re serving about 44 individuals in the site and we’ll have more rooms available once we get the conversion done,” Jackson told Councilors.

Jackson praised the relationship he and his colleagues have built with CCPD, saying they want to make sure Legacy residents have a safe place to live and “get better.”

“A lot of our clients have some challenging behaviors at times,” he said. “Many suffer from addiction and mental illness and they bring along associated people with them that often times have unhealthy behaviors. It’s crucial for us to have a great working relationship with CCPD.”

One incident Jackson said he and his colleagues and police officers had to address was removing a visitor who was selling drugs and had a gun.

City Councilors, who when the county initially purchased the motel for housing for the homeless expressed dismay at not being included in the process, were disturbed at the jump from 71 calls for service in 2019 to 194 in 2020.

Though they, too, praised the relationship Griffin and his department have built with Jackson and his colleagues at the Legacy, Councilors were at a loss for how to address the increase in emergency calls.

Griffin, who noted that in recent weeks the number of emergency service calls to the former motel has been trending down, said he’s had zero communication with the sheriff’s office about the Legacy.

“I don’t have a response as to why not other than it’s in city jurisdiction,” Griffin said. “That's another one of my frustrations. Comments were made during the initial part of this as far as collaboration of resources and the reality is zero communication and we’re doing the best we can to deal with it because it’s a city jurisdiction issue.”

Smith, who said he had counted five or six vehicles without current registration tags parked at the Legacy during a recent visit, said he’d like to see more involvement from the sheriff’s office.

“I’m for the project, but I’m also for a whole city and everybody else that lives here as well,” Smith said. “It seems like the sheriff’s office could be a little more involved and held a little more accountable for something that’s technically their property.”

Crescent City Mayor Pro Tem Blake Inscore, however, noted that while the city could carve out an agreement with the county stating that because the Legacy is theirs DNSO has to respond to calls for service, the Legacy does fall within the city’s jurisdiction. Instead of trying to get DNSO more involved on responding to emergency calls, Inscore suggested working with the county to offer additional support to Legacy staff.

“I think we should have anticipated an increased call volume when people started living there anyway,” Inscore said. “That’s the difference with a motel if you look at any call volume versus any apartment complex. There’s a difference when people are staying there for longer periods of time.”

Inscore praised Jackson and Legacy staff’s partnership with CCPD, but urged him to reach out to his colleagues with DHHS and at the county to ask for any support the program may need.

Griffin said his department is moving forward with plans to receive better training from the county mental health branch. Other potential collaboration opportunities include offering ride alongs, he said.

Jackson said there has also been a desire on the part of Legacy residents to get to know police officers and others in their neighborhood through a barbecue.