Crescent City Hopes Cleanup of Property Near Cemetery Will Be A Community Effort; Challenges Include Potential Encounters With Needles, Steep Terrain 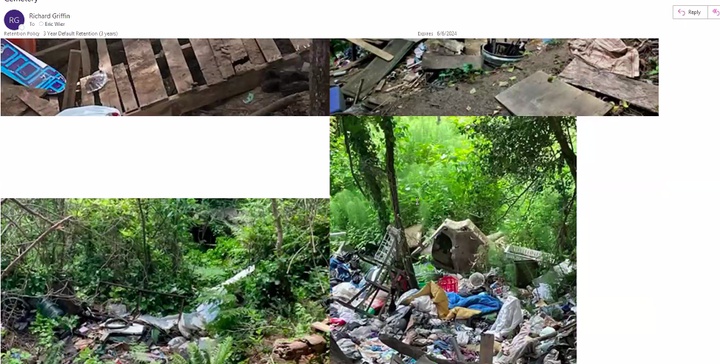 City Manager Eric Wier on Monday showed Councilors the amount of trash and debris found at a city-owned parcel near the cemetery.

Though sharps may be involved and the terrain is steep, the Crescent City Council hopes to turn the cleanup of city-owned property near the cemetery into a community effort.

Councilors on Monday discussed reaching out to Smith River Alliance and other volunteer groups to help remove debris left behind by transients in the wooded riparian area near Cooper Avenue.

“In talking with the ambassadors, one of the key unhoused ambassadors, they approached (Daphne Lambert) and said, ‘That’s not our area and it's not our mess, but to build trust with our community, we would be willing to put our efforts into going in and cleaning up that area,’” Inscore told his colleagues Monday. “I met with Daphne again today, and they're serious. They would like to have an opportunity to go in there and make a difference.”

Lambert, founder of Del Norte Mission Possible, created the Winter Shelter in Place program as a way to provide services, food and other necessities to those living in local homeless encampments.
In exchange for those necessities, Lambert provided contractor bags, urged those she interacts with to fill them with trash and other debris and return them so she could take them to the Del Norte Transfer Station.

In April, with the Council’s approval, Lambert added a city-owned access road near the cemetery to the Winter Shelter in Place program. Other stops include Walmart, the RHS building on M Street and Park City Superette at Elk Valley and Howland Hill roads.

Despite the program’s overall success — at the Council’s April 6 meeting, Lambert said her clients had picked up 3,120 pounds of trash in roughly a week — the property on Cooper Avenue has housed multiple transient encampments and is littered with several tons of debris, according to the city’s staff report Monday.

The encampments in the area have also kept Crescent City Police officers busy, according to Chief Richard Griffin. He said his officers have responded to the area numerous times for domestic violence calls and other issues and have made several arrests.

“They did their job in having people not be camping there,” Griffin said.

Griffin estimated that the area several football fields long. Though you can access it, he said, it slopes off quickly and becomes marshland with waist-deep water. Cleaning up the area isn't a project that could be “knocked out” in two days, Griffin said.

Plus, because of the steep terrain, the use of heavy equipment to do the cleanup isn’t an option, according to Jason Wylie, the city’s public works maintenance manager.

Knowing the city would need help, Griffin said he reached out to Pelican Bay State Prison's Crisis Response Team, who indicated “they're on board with coming out.”

That may prove to be challenging, however, according to Gillespie.

“In order to be able to use their resources, we would first have to be able to go into that site and ensure all the hypodermic needles and fecal material had been removed, which would be literally picking it up, searching through all of it and setting it back up and then bringing inmate labor forces back in,” he said. “They’re constrained through the state as to what they can and cannot be involved with, and I do recall the same when we attempted to use one of the other camp crews when I was down in Eureka previously. Neither one of those in the current situation would be practical for us.”

Wylie said he’s also nervous about using city crews to clean the area up, though they are trained to work with sharps, because of the steep terrain.

City Manager Eric Wier, noting that many residents want to see the area cleaned up and would offer to help, said he reached out to the city’s insurance company, which indicated that a community cleanup may be an option but only if the city offers the proper training.

This includes being trained to dispose of sharps properly and training in the use of personal protective equipment, Wier said.

“Obviously it’s an increase in liability,” he said. “But if we try to do (the cleanup) ourselves, we’re looking at two to three weeks of us picking at it.

Inscore, who also chairs the Del Norte Solid Waste Management Authority board, in addition to bringing up the possibility of partnering with Del Norte Mission Possible, said he was confident the DNSWMA Board of Directors would authorize a Recology Del Norte bin for a community cleanup.

Though Crescent City Mayor Jason Greenough, his colleagues and staff brought up the idea of using community volunteers to help clean the community up, Inscore said the city may want to look at the cleanup in multiple phases.

“We’re not going to get it done in one day, anyway, while there is an appetite on the part of Daphne’s group to want to make an impact,” Inscore said. “If we can’t get everybody to the table at once, we can do a small project with them. I want to give them an opportunity if we can’t get everything else put together for a bigger project.”

Inscore offered to be a liaison between the city and Del Norte Mission Possible.

Wier said the city may be able to offer the necessary training to volunteers after the July 4 holiday. He suggested letting Del Norte Mission Possible clients come in to do the training first before bringing in the “greater community.”