Crescent City Hopes Cleanup of Property Near Cemetery Will Be A Community Effort; Challenges Include Potential Encounters With Needles, Steep Terrain » 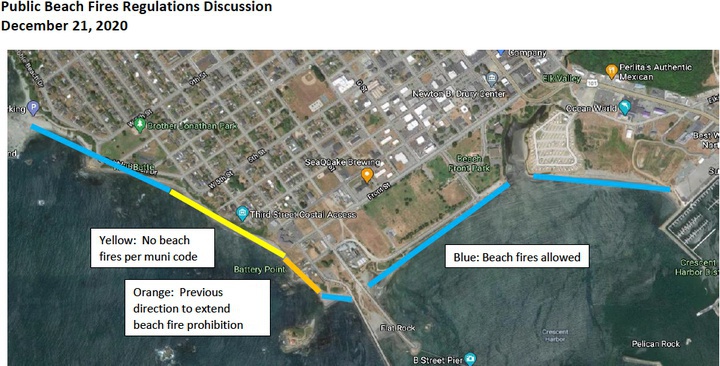 This map shows where beach fires are permitted and where they're prohibited. Courtesy of Crescent City

But because a legal notice advertising a public hearing on the new regulations failed to get published in the Del Norte Triplicate — the county’s newspaper of record — Councilors found themselves facing a do-over on Monday.

Councilors also faced a dilemma regarding the Fourth of July holiday: Once adopted, the new ordinance wouldn’t go into effect for 30 days, meaning law enforcement and the local fire department wouldn’t be able to enforce the new beach fire ban until July 7.

Councilors solved that problem by re-adopting the ordinance by a 4-1 vote on Monday and directing staff to bring an urgency ordinance back to them on June 21 so the Crescent City Police Department and Crescent Fire and Rescue can enforce the new regulations during the holiday. Councilor Isaiah Wright dissented.

According to City Manager Eric Wier, city staff will double check that legal notices are published in the newspaper.

“It was advertised as a public hearing or set to be a public hearing,” Wier said of the ordinance that Councilors voted on March 15. “Unfortunately when we requested proof of publication from the local newspaper of circulation, which is the Triplicate, it came to our attention that they did not publish that public hearing.”

The new regulations would bring the Crescent City Municipal Code in line with the 2019 California Fire Code, allowing the fire and police departments to issue citations to those who violate the ordinance.

Once it takes effect, the updated ordinance allows fires up to 3 feet in diameter and 2 feet in height on private property with the owner’s written permission. The fire must be 25 feet away from structures or vegetation. The fuel must be organic and fires must be completely extinguished before being abandoned. The ordinance also prohibits burying coals.

On Monday, Wier informed the Council that because of the delay, the ordinance wouldn’t take effect until July 7. While fires would still be prohibited between Front and 6th streets, they would be permissible between 6th Street and Preston Island, which was included in the new ordinance, he said.

After the Council approved the ordinance in March, city staff erected signs informing people of the new regulations at Battery Point, 5th Street, 6th Street and Preston Island, Wier said. But once they learned that due to the missing notice for the public hearing, the ordinance hadn’t taken effect, staff took the Preston Island sign down, he said.

“The poles are there, it’s just a matter of putting the signs back up once the ordinance is passed,” Wier told Councilors. “We can put out barricades with larger signs — the chief was talking about that as well — making sure we do as much as we possibly can from a sign ordinance standpoint.”

Crowds have flocked to Crescent City for the Independence Day holiday for years, building beach bonfires and shooting off fireworks. Wier said barriers and signs can direct people to the Howe Drive area or further north on Pebble Beach Drive or to South Beach where fires are permissible.

“For people who do want to come here, obviously they’re still welcome, they just can’t have the fire,” he said.

Crescent City Mayor Pro Tem Blake Inscore noted that if the Council passed an urgency ordinance on June 21, it would allow the beach fire ban to take effect a full two weeks before July 4.