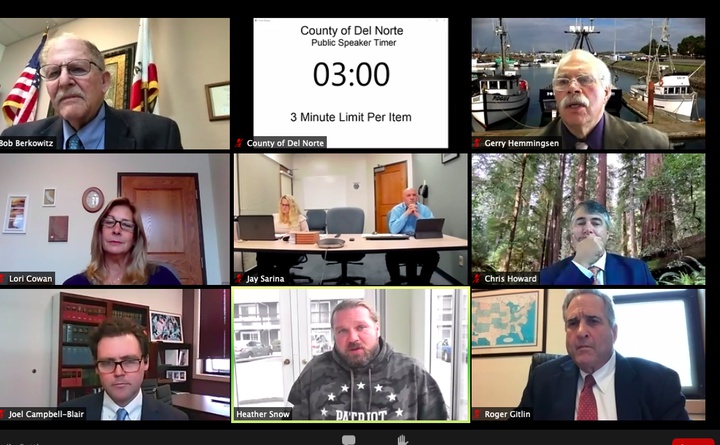 RK Gray (bottom row in the middle) speaks before county supervisors on Tuesday regarding the proposed purchase of Coastal Inn & Suites.

• County Plans to Use $2.4 Million Grant To Purchase Local Motel, Convert It Into Permanent Housing for the Homeless

Gray was one of several Del Norters who told county supervisors Tuesday that he would have been homeless during the COVID-19 pandemic had it not been for Project RoomKey and Coastal Inn & Suites. For Gray’s wife, who faces a bilateral mastectomy, the state-funded emergency interim housing program will help her “get rid of cancer completely.”

“I’m not a criminal,” Gray said. “I’m just an upstanding member of society trying to do what’s right. I urge you guys to look upon us with kindness. We don’t like to be stigmatized for things we have not done.”

After hearing public comment both for and against, four members of the Del Norte County Board of Supervisors approved a proposed purchase of the 30-unit motel at 665 L Street in Crescent City using $1.9 million in state Project HomeKey dollars.

At least two supervisors thanked Del Norte County Health and Human Services Director Heather Snow for putting a “face to the issue” by urging Gray and other Project RoomKey recipients to tell them their story.

Del Norte County District 1 Supervisor Roger Gitlin, who participated in a rally outside the motel on Saturday, voted no on the purchase of the motel.

Gitlin also opposed amending an existing agreement with Coastal Inn & Suites to continue to provide interim emergency housing through Project RoomKey for the homeless. The cost was an amount not to exceed $600,000 in Project RoomKey dollars.

Further, the District 1 county supervisor cast the sole dissenting vote on a 5-year $200,000 agreement with Rural Communities Housing Development Corporation to provide consultation and management for the Project HomeKey program at the motel.

Gitlin argued that using Coastal Inn & Suites for a permanent supportive housing program poses a safety threat to any children that may be living there since it is sandwiched between the main route through Crescent City. He further lamented the loss to the city of $34,000 in transient occupancy taxes and a loss in $8,500 in property tax dollars.

“I don’t disagree with the use of motel services to temporarily house people,” Gitlin said. “I don’t think it should be in the spine of our community. I think there are better places suited, we just have to look a little harder.”

In making her case to the Board of Supervisors, Snow said DHHS is currently housing 43 adults and 7 children through Project RoomKey at Coastal Inn & Suites. This, she said, citing data from the U.S. Department of Housing and Urban Development, is 27 percent of Del Norte County’s homeless population.

The Ukiah-based firm has been working with Del Norte County and Crescent City to help build a housing program for the chronically homeless and mentally ill through No Place Like Home, Snow said. The firm also manages three properties in Del Norte County, she said.

County supervisors have also approved the use of hundreds of thousands of dollars to offer temporary shelter to those who are homeless the motel since it was called the Pennysaver Inn in April 2016, Snow said.

“For a few years that keeps going and then COVID comes and we were urged by the state to protect vulnerable homeless people,” she said. “The homeless were considered high risk for exposure to COVID and we were encouraged to find motels and house anybody who was experiencing homelessness.”

Though Project RoomKey dollars were gone, DHHS was able to cobble together enough funding for Del Norte to start its own program, Snow said. The department asked local motels, which had been shuttered due to the pandemic, for help, but only four responded.

Of those four motels, Snow said, three wanted to either house first responders only or have the county rent out the entire facility. Coastal Inn & Suites was the only one to agree to house those experiencing homelessness, she said.

“We started with a smaller number of rooms because we were not sure how long this would last  and it quickly expanded to us taking full capacity,” Snow said. “We brought two amendments to the county administrative officer to increase the number of rooms, which is why we needed to increase the (funding) amount with your approval today.”

In the meantime, the State of California issued a notification to counties on July 16 that funding was available through Project HomeKey, Snow said. However, those dollars need to be spent by Dec. 31 and the facility has to be occupied within 90 days.

Snow said one of the stipulations required with Project HomeKey is the program that is created must house at least 5 percent of the county’s homelessness. Snow said there was a property owner on 9th Street that had reached out to DHHS, but whose facility only had 10 units. The amount of rehabilitation involved would also have prevented the facility to begin operating by the Dec. 31 deadline, she said.

Snow further spoke to Coastal Inn & Suites now-empty swimming pool — which a handful of commenters cited as a potential safety hazard to children staying at the motel.

“I don’t plan that we’ll keep the pool,” she said. “I think there needs to be a space for when people can gather to have some safe space together. Part of our rehab is to either add kitchenettes to units or discuss the need to have a community kitchen. That could possibly be the ideal space for that. It’s certainly a better use than being an empty pool.”

Public response to the proposed Coastal Inn & Suites for permanent supportive housing was mixed. Some like Some like Mary Wilson, who owns Ocean World, and Thomas Barnes, who owns the property management company TAB & Associates Inc., argued that having a housing program for the homeless where millions of visitors can see it would be a detriment.

Barnes asked if Snow had spoken with businesses near the motel like Walgreens, Tractor Supply and Safeway.

“This is a magnet to attract homeless people to the Crescent City area,” Barnes argued. “Contrary to previous comments, the majority of homeless are either drug addicted, alcohol addicted or mentally ill. The public, I feel, has almost been ambushed by the Board of Supervisors. There has been no advanced warning, no public notice, no chance to consider or discuss this public issue.”

Wilson said that while a facility to house the homeless is needed, the location is seen by “100 percent of the visitors that come into this community.”

“Right now our community has very few industries to rely on and has held up tourism as one of them,” she said. “I don’t feel the amount of money that will be left over to maintain the facility will be enough to adequately take care of it. Right now the facility is in good condition because it’s not owned by the county and the business owners maintain it constantly. I’m concerned about the ongoing cost associated.”

After discussing the issue at length Sept. 8, the Crescent City Council submitted a letter to the county saying that while they support the project it was disappointed in a lack of communication about Project HomeKey. The Council’s letter noted that converting existing hotels and motels does result in a loss of revenue to the city in transient occupancy taxes, or hotel bed taxes, and sales tax.

“These fiscal impacts are good reason for clear communication if the project site involves property within city limits,” the Council’s letter stated.

Crescent City Councilor Jason Greenough, who is the only incumbent seeking re-election next month, said he disapproved of the plan to “purchase Coastal Inn & Suites to turn it into a homeless shelter.”

“While I do acknowledge the need for a facility like this, I do not believe it should be a location between two thoroughfares of traffic,” he said. “Not to mention the possible blight that could be produced and the loss of revenue the city would lose to the tune of tens of thousands of dollars.”

His colleague, Crescent City Mayor Blake Inscore, said that he’s supportive of what the county’s trying to accomplish and noted that he had been involved with State Sen. Mike McGuire in trying to create a permanent program through No Place Like Home. But, he said, he was disappointed at not being included in the discussion.

“I appreciate the fact that we finally have an opportunity for a real solution,” Inscore said. “As leaders we got to continue to communicate and work together so we can remove some of the disinformation that ends up coming out as has happened in this case.”

Angela Glore, executive director of First 5 Del Norte, said she supported the program, especially if it gets children out of homelessness. Noting that homelessness is an example of childhood trauma and can set the stage for children to become homeless as adults, Glore argued that the Project HomeKey could house one in five people currently experiencing homelessness in Del Norte County including families with young children.

Candace Tinkler also noted that there are children in Del Norte County who are sleeping in cars and took issue with those who said homelessness was a choice.

“Our county’s children who don’t have a home are not choosing it as a lifestyle,” she said. “Homelessness is a national crisis and there but for the grace of God go I.”

Tinkler, who was speaking as a county resident though she’s also the chief of interpretation at Redwood National and State Park, noted that the homeless are already conspicuous in Downtown Crescent City, at Beachfront Park, Point St. George and on the beach near her home.

Another voice in support of Project HomeKey and the purchase of Coastal Inn & Suites came from Maquoo Anderson, who is in the process of purchasing property near the motel. Saying he was involved in a similar housing program where he comes from, Anderson asked county staff about how the program would keep operating after the 5-year agreement with Rural Communities Housing Development Corporation expires.