« SMOKE REPORT: The Air Will be Hazardous to Health in Hoopa and Willow Creek Today, Air Quality Management District Warns

County Plans to Use $2.4 Million Grant to Purchase Local Motel, Convert it Into Permanent Housing for the Homeless 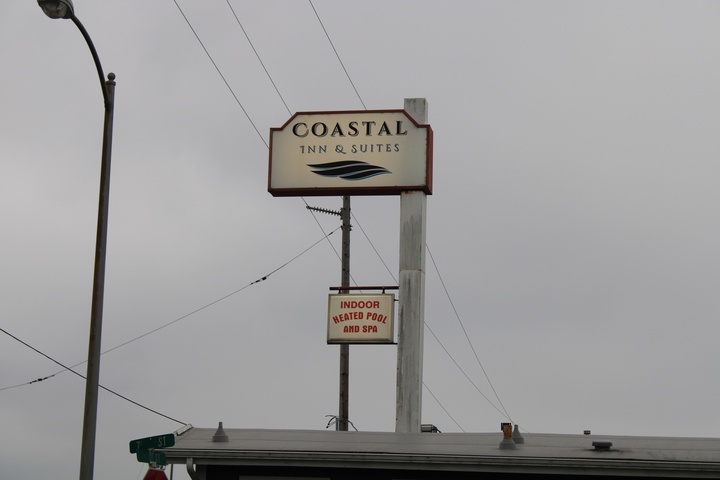 A plan to purchase a local motel using state grant dollars and convert it to housing for the homeless has the county at odds with three Crescent City Councilors.

But though those elected officials lamented the loss in tax revenue and the motel's location on U.S. 101, the Coastal Inn & Suites has long partnered with the Del Norte County Department of Health and Human Services to offer shelter to those who are without.

DHHS has purchased rooms at the motel at 665 L Street in Crescent City for several years to offer temporary housing to those finding themselves homeless, Director Heather Snow told the Wild Rivers Outpost. This has been a practice since before she headed the department in 2016.

As of about May, the motel has partnered with Del Norte County through Project Homekey, a state program focusing on getting the homeless out of shelters and off the streets during the COVID-19 pandemic. Coastal Inn & Suites is currently sheltering 42 adults and seven children through that program, Snow said.

”Ultimately we took over the whole motel, I think that was in May, and we’ve been using the motel at full capacity since then for interim housing,” Snow said. “With COVID, we don’t know what’s coming next. Project Homekey has been, ‘We got to get through today.’ But in the back of my head (I know) it’s not sustainable. How are we going to continue to pay for an entire motel?”

On Oct. 13, Snow will bring a proposal to the Del Norte County Board of Supervisors to purchase Coastal Inn & Suites using $2.4 million her department has received in California Homekey dollars. The $600 million program allows agencies to purchase hotels, motels, vacant apartment buildings and other properties and convert them into permanent long-term dwellings for those experiencing or at risk of experiencing homelessness.

Snow, who found out Monday that her agency’s grant application was successful, said those dollars could either be used to purchase a motel or continue to rent it at maximum capacity. The latter option was her backup plan, she said.

“We didn’t initially plan to purchase the same motel — it wasn’t for sale,” Snow said. “We started looking at whatever was on the market and it led us back to realizing that every place on the market is a lot of work and needs a lot of rehab and we’re already in this motel. It came up that the owner was willing to sell it to us.”

One of the key components to Del Norte’s application for the Homekey grant was a letter from the Coastal Inn & Suites owner, saying they wanted to sell the property to the county, Snow said. Its current use for interim housing was another factor in the motel’s favor, she said.

Snow also pointed out that DHHS has had good results serving the homeless population at Coastal Inn & Suites. In addition to the roughly nearly 50 people it currently serves, there's a waiting list of those unable to find shelter elsewhere. The motel is also close to grocery stores, pharmacies and DHHS offices, she said.

“We have to do some rehab for it to turn into permanent housing,” Snow said of Coastal Inn & Suites. “Permanent housing has to have kitchen access, and so that’s one of the things we have to look at when we go through the process over the next few months.”

Coastal Inn & Suites was one of two to three local motels that responded to a request for proposals from the county early in the pandemic when it was seeking space to house those experiencing homelessness.

Snow said her department chose to work with Coastal Inn & Suites because of its previous relationship.

In his report to the Crescent City Council on Sept. 8, City Manager Eric Wier said converting Coastal Inn & Suites to permanent housing for the homeless would equate to a loss of “tens of thousands of dollars in TOT” for the city. He said he doesn’t know if the county investigated other potential locations.

Wier said he reached out to county staff when he heard about its Homekey project. He added that because the program was created to help mitigate the COVID-19 crisis, zoning regulations and use permits don’t apply to the county’s planned purchase of the motel or its conversion to permanent housing.

“The issue that we sort of struggle with on something like this is, yes, it does create housing to meet the crisis at this moment in time,” Wier said. “But that project will last much longer than what this crisis is. Is this truly the right location? It makes it tough when you have a timeline that is such a narrow window.”

The result was a Council decision to send a letter to the Del Norte County Board of Supervisors stating that while they support Homekey and the county receiving those dollars, they want DHHS to explore “other options beyond Coastal Inn & Suites.”

During their discussion, both Kime and Greenough said they were disappointed that the county didn’t let staff know what their plans were for the motel and lamented the loss in TOT revenue. Kime brought up the county’s pursuit of funding through another state program, No Place Like Home, which seeks permanent supportive housing for those who are chronically mentally ill and chronically homeless.

Kime mentioned the McCarthy Center on Williams Drive, one of three county-owned property an analysis funded with No Place Like Home dollars determined would be suitable for a permanent supportive housing program. She drew a comparison between the McCarthy Center and Coastal Inn & Suites.

“I feel nervous,” Kime said. “Having mentally unstable people living right there on the highway. I would much rather have them looking at a property like the McCarthy Center that is set back a little bit where people aren’t right there if they’re unstable.”

Councilor Alex Fallman’s opinion differed from that of his colleagues. He pointed out that he and his colleagues previously approved a resolution to end homelessness and on Sept. 8 called for writing a letter to the Del Norte County Board of Supervisors supporting the proposed Coastal Inn & Suites purchase.

Fallman agreed that county staff and elected officials owed the people of Crescent City a presentation on the project, but he’d be willing to overlook that omission to support housing for the homeless.

“The homeless population already does congregate along Highway 101. I don’t understand where protecting a supposedly mentally unstable population factors into this,” Fallman told Kime. “They already walk along the highway and they don’t seem to be jumping in front of cars.”

If converting Coastal Inn & Suites to permanent housing for the homeless is going to cost Crescent City in tens of thousands of dollars in TOT, Fallman said, “that’s putting our money where our mouth is and agreeing to do what we already agreed to do.”

When she heard of the Crescent City Council’s misgivings, especially about an apparent lack of communication, Snow said she was surprised. DHHS included a letter of support from the Crescent City Housing Authority in its application for Homekey funds, Snow said. She also pointed out that Wier didn’t mention in his report that the county had been purchasing motel rooms for temporary shelter for the homeless for years.

“I know that I was spending hundreds of thousands of dollars on this location every year,” she said, referring to DHHS. “That TOT was coming from the county. We were the ones renting the rooms. We can’t afford for the city to rely on us to pay that. We really need to prioritize our residents, the people that consider Del Norte County their home — I certainly do — over tourists that are passing through.”