« From Face Masks To Hand Washing, What DNHS Students Can Expect Tuesday 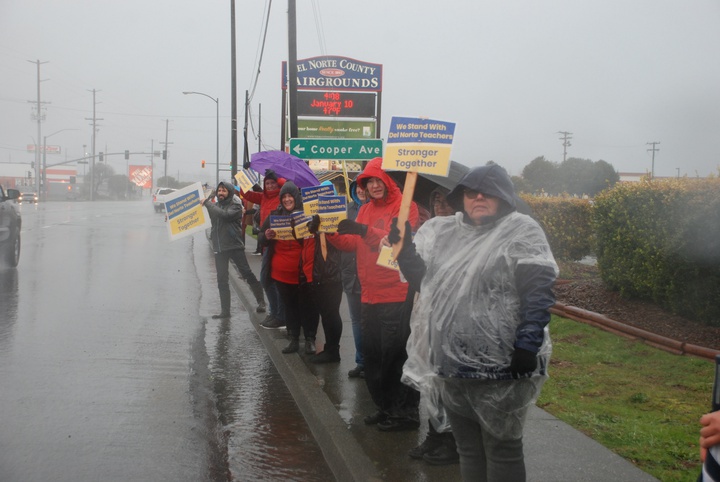 Del Norte Unified teachers stand in the rain in January 2020 calling for an end to a stalemate in contract negotiations with the district. File photo: Jessica Cejnar

After COVID-19 ended a year-long stalemate last spring over salaries and health benefits, the Del Norte Teachers Association is gearing up for negotiations over the entire three-year contract.

items up for negotiation this year include the ability to strike, a 5 percent increase to the salary schedule and an increase in Del Norte Unified School District’s contribution toward health and wellness benefits, the union’s lead negotiator, Paige Thompson told trustees Thursday.

“Originally our entire contract was set to be open for negotiations this year, for 2021,” Thompson said. “But we agreed with the district that we had been spending so much time on reopening (memorandums of understanding) that we would sign a (tentative agreement) to have everything stay status quo. Now the entire contract is open for negotiations beginning next year.”

Last May, after being at an impasse since Feb. 28, 2019 — which included mediation by a state-appointed arbitrator — DNTA and DNUSD agreed to end the stalemate as both parties tried to figure out how to teach during a pandemic.

DNTA members also received a one-time 0.5 percent off-schedule supplemental payment based on their annual salary. The district’s contribution to health and wellness benefits had been increased to $11,700 from $10,700.

DNTA and DNUSD had originally anticipated going back into negotiations when the entire contract ended on Aug. 31, 2020. Due to the pandemic, those negotiations were postponed.

On Thursday, Thompson said one of the union’s goals for their new contract would be to update the terms and proof reading procedures, removing things that are outdated and cleaning up existing language.

DNTA is also asking the district to changes when payments are made to certificated staff whose case loads and class sizes increase the maximum amount.

“Depending on which thing is exceeded, you may not be paid until the very end of the school year,” Thompson told trustees. “You could have well over a case load every day for the school year and not get any relief payment until the last day in May.”

Regarding the ability to strike, covered in Article 4 of the contract, Thompson said DNTA proposes either allowing for a strike or eliminating that provision.

This proposal comes after DNUSD administrators challenged the union’s ability to strike during last winter’s conflict over the 2019-20 contract and proposed increases to the salary schedule. DNUSD Superintendent Jeff Harris, citing Article 4, told the Outpost on Jan. 10, 2020, that since the district hadn’t imposed a last, best and final offer to DNTA, a teacher strike would be illegal.

On Thursday, in addition to calling for a 5 percent increase to each cell of the salary schedule for certificated staff, Thompson said, DNTA wants an option of an August paycheck for teachers.

“Here, you’re working in August and you have to pay rent in August, but you don’t get your first paycheck until the last day of September,” Thompson said. “Teachers getting their supplies for their classroom spend their own money upfront and then get reimbursed. You do eventually get paid back for that, but (you’re) having to front money when you’ve been without a paycheck since June. It can be tricky.”

As for health and wellness benefits, Thompson said, DNTA is arguing for an increase in the district’s contribution since premium payments will increase and the union is in the process of choosing a different provider and plan.

According to DNTA President Marshall Jones, the union’s membership will vote on whether to maintain its insurance with North Coast Medical Group soon. This comes after several meetings between DNTA’s health committee, district management and classified staff representatives, he said.

Other proposed changes to DNTA’s contract includes an increase in daily planning and prep periods for teachers as well as a clarification on how school schedules are made. According to Thompson, this includes making sure instructional minutes grade by grade are consistent at all school sites.

When Thompson concluded her presentation, Trustee Area 4 representative Charlaine Mazzei asked her about eliminating Article 12 concerning management rights in the DNTA contract.
According to Thompson, who was paraphrasing, that article is one sentence that says the district has the “right to manage.”

“There’ve been a lot of instances where there might be something that comes up that’s not explicitly covered in the contract and instead of the district and DNTA working together to find a resolution, that article has just been cited as, ‘We have the right to manage and you don’t have a say in it,’” Thompson told Mazzei. “That undermines our ability as professionals to have an ongoing say in our working conditions.”

The DNUSD Board of Trustees will hold a public hearing at its Feb. 25 meeting focusing on DNTA’s proposed changes to the contract.