From Face Masks To Hand Washing, What DNHS Students Can Expect Tuesday 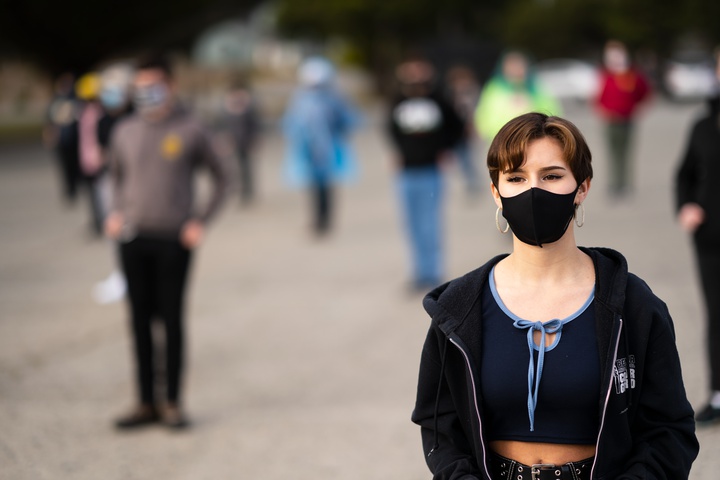 Though students will have a lot to do before they get into their classroom at Del Norte High School on Tuesday, Principal Alison Eckart promised their first hour of school will be a celebration.

“We’re going to celebrate that first hour feeling a little bit more to like we’re moving back to what high school is about,” she said. “The relationships, the support, the instruction, the connection and the engagement piece with the material and the curriculum.”

In addition to letting students know they will be required to wear a mask or face covering and will have to wash and sanitize their hands multiple times a day, Thursday’s video covered passing periods, lockers, lunch and sanitizing. Students will also be responsible for wiping down their seat so they know it’s clean, Eckart said.

The county’s graduation from the most restrictive Purple Tier to the less restrictive Red Tier on California’s Blueprint for a Safer Economy on Tuesday meant DNHS could bring steady groups of students back to campus after a five day waiting period.

Being in the Red Tier means there is still a substantial risk of COVID-19 transmission, but businesses, including restaurants and places of worship, can operate at a limited capacity indoors.

At Del Norte High School, students will be divided up into Tuesday-Thursday, Monday-Wednesday and distance learning cohorts, according to Eckart. Those coming on campus will hand a health screening questionnaire to a staff member at one of five entrances to the school. They will receive a passport indicating they were screened and classes will begin at 9:45 a.m.

“We’ll have teenagers in student desks and teachers presenting instruction,” Eckart said. “We’ll be simultaneously casting to the audience at home — the Monday-Wednesday and DL learners.”

At a Board of Trustees meeting on Thursday, Harris said DNHS will continue to offer in-person classes even if Del Norte County falls back into the Purple Tier. Even if that were to happen on Tuesday, the students slated to start their classes on Wednesday would still be able to, he said.

Citing Public Health Officer Dr. Warren Rehwaldt, Harris said to move to a less restrictive tier on the Blueprint, a county has to have an absolute case count of less than 35. He noted that Del Norte County and other small counties are subject to an alternate assessment for moving to more restrictive tiers. But that’s not the case for moving from Purple to Red, he said.

“As of Tuesday we’re the only county in the state that moved to a less restrictive tier,” he said. “For all we hear about people not complying with certain things, a lot of our folks have taken it seriously. I’m hoping people did that if, for no other reason, they understood the need to get us to Red to get our kids back in school.”

Del Norte High School had planned to introduce more students back to campus starting on Jan. 25. Those plans were stymied when the California Department of Public Health came out with new guidelines on Jan. 14 defining what it means for a school to be open to in-person instruction.

On Thursday, CDPH had an appeals process that may have allowed DNHS to reopen about three weeks ago, Harris said. But that appeals process wasn’t available until Wednesday, he said, and CDPH has no intention of denying further advancement on reopening schools “because their intent is to get kids back into school.”

On Thursday five new cases were reported to the Public Health Branch, making for a total of 28 active cases in Del Norte County, according to the county’s COVID-19 Information Hub. One person is currently in the hospital.

Del Norte County has seen 919 COVID-19 cases and four deaths since the start of the pandemic, according to the Public Health Branch.

For more information on reopening the high school, visit DNHigh.org.