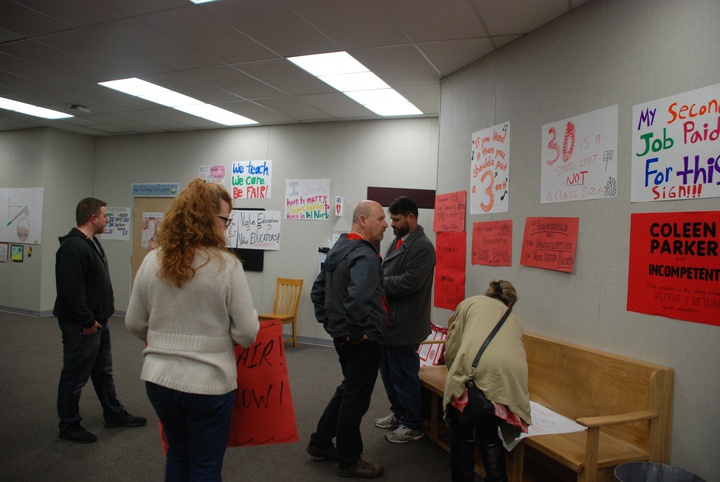 Del Norte Teachers Association members hang signs in the district office ahead of a school board meeting. Photo: Jessica Cejnar

After more than a year of negotiations, a stalemate between Del Norte Unified School District and the union that represents its teachers appears to be at an end.

Both sides reached a tentative agreement Friday on the Del Norte Teachers Association’s 2019-2020 contract. But, according to DNTA President Marshall Jones, what likely drove the agreement was a desire to end the conflict as both staff and administrators prepare to determine what 2020-21 hold.

“I think the overriding thing is COVID-19 as far as getting an end to this so we can end the year and not have to maintain this same battle for things,” Jones told the Wild Rivers Outpost on Monday. “It’s no secret the state budget is going to be hugely affected by the shutdowns. We just needed to get this taken care of so we can prepare for what’s going to be coming at us this summer and beyond.”

Another new component in the 2019-2020 DNTA contract was revising the definition of immediate family, Jones said.

The point of contention between both parties, however, was the issue of salaries and health benefits. Under the tentative agreement, teachers and certificated staff get a 2 percent increase to the salary schedule effective July 1, 2019. The district’s contribution to DNTA members’ health benefits has been increased to $11,700 from $10,700, according to the agreement.

Flat-dollar stipends have also been increased by 2 percent and DNTA members will receive a one-time 0.5 percent off-schedule supplemental payment based on their annual salary, according to the agreement.

Both sides have been sparring since Feb. 28, 2019 over certificated staff salaries and benefits for 2019-2020. DNTA had initially been pressing the school district for a 3.54 percent increase to the salary schedule, while DNUSD offered a 1 percent raise.

Teachers began the 2019-20 school year without a ratified contract in August. In October, DNUSD offered an additional 1 percent increase contingent upon enrollment, bringing the total proposed raise to 2 percent.

Unable to reach an agreement, both sides met with an arbitrator appointed by the California Public Employees Relation Board in December. The arbitrator, Renée Mayne, released a report on Jan. 14 based on the district’s initial salary increase offer of 1 percent.

According to Mayne’s report, the district also offered a $2,000 stipend for teachers at underperforming schools and wanted to keep its health benefits contributions for certificated staff at $10,700.

The district and DNTA continued negotiations after Mayne’s report came out and after DNUSD shuttered schools on March 16 due to the COVID-19 pandemic. According to Jones, DNTA membership will meet on Tuesday and again on Friday.

The tentative agreement comes as DNUSD seeks input from parents on what they think school should look like next fall. Ultimately learning could occur in person, online or both, Superintendent Jeff Harris told the Outpost. The district will deploy a survey Tuesday or Wednesday to ask families, based on their child’s grades, which they would prefer, he said.

“We’ve had a lot of families just want the distance-only and a lot of families want kids to come back to the classroom,” Harris said. “One thing we do know, and this is where blended may come into play, we may not be able to have 20-30 students in a classroom.”

DNUSD will work with its certificated and classified staff as well as principals to figure out what social distancing will look like in a school environment, Harris said. Classroom attendance will also be determined by the state public health department and Del Norte Public Health Officer Dr. Warren Rehwaldt.

“We need to begin thinking about and planning around so we can make, for instance, the appropriate purchase, clean out storage rooms that may now become classrooms or whatever that looks like,” Harris said. “We continue working on digital access, on Internet access, hardware, issuing student devices for longer terms….”

As DNUSD plans for the 2020-21 school year, this also means coming up with a district budget that takes into account COVID-19’s impact on state funding. On Thursday, Harris pointed to a California Department of Finance fiscal update, which projected a $54.3 billion overall budget deficit as a result of the pandemic.

According to Department of Finance, this revenue decline means the state’s required funding level for education would be $18.3 billion less than what was originally projected in January. on Thursday, Harris told trustees, this means DNUSD’s state funding could take a $4 million hit.

On Monday, Harris said though the Department of Finance states the financial hit to Califonria public education could be as much as $18 billion, other interpretations is that the financial impact may be less.

The Legislative Analyst’s Office will be coming out with an interpretation of the fiscal picture, Harris said. California Governor Gavin Newsom is also expected to issue his revised budget proposal this week, Harris said.

According to Harris, the pandemic may impact the district’s cash apportionment from the state for May and June, which it needs to meet its payroll. If that’s the case, he said, the district will use its cash reserves to make payroll. It may also borrowed from other district funds, such as text book money or maintenance, to make its payroll, Harris said.

Harris said DNUSD’s Board of Trustees will also continue developing the district’s 2020-21 budget as the state develops theirs. The Legislature will approve a budget by the end of June as will the school district, he said.

State lawmakers will then discuss reducing that budget and issue a new budget, which means DNUSD will have to approve a new budget by Aug. 15, Harris said.

“That will shift again even as we move into October and November as we start looking at first interims — where are we after the first portion of the year,” Harris said.

DNUSD administrators also don’t know how much additional funding it will receive for its English language learners, foster students, homeless students and low-income students, Harris said. As the district gathers input from parents on what the next school year will look like, it will also engage families on the services and resources the district should keep, he said.