Rec Swim at Fred Endert Pool Will Resume This Weekend » 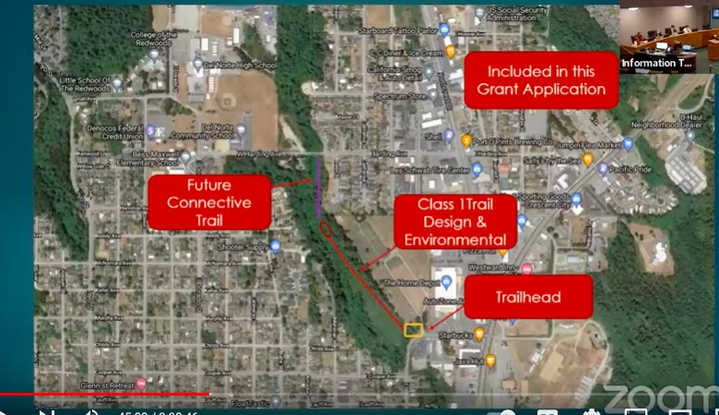 The city hopes to use state grant dollars to construct a trail on a problematic piece of property near the cemetery in an effort to deter dumping. Map courtesy of Crescent City

• Crescent City Hopes Cleanup of Property Near Cemetery Will Be A Community Effort; Challenges Include Potential Encounters With Needles, Steep Terrain

Nearly two months after volunteers removed 5,000 pounds of garbage from a city-owned property near the Crescent City cemetery, City Manager Eric Wier unveiled a plan for turning the area into a community trail as a way of deterring further dumping.

With help from GreenDot Transportation Solutions, Crescent City will pursue a Clean California Grant to continue cleaning up the area Wier referred to as the Cooper Avenue Greenbelt and turn it into a class 1 trail.

If the city's application is successful, Wier said he envisions working with Del Norte Mission Possible or another nonprofit to help hire those who are unsheltered to conduct the cleanup. The grant will also pay for a trail master plan that includes creating a trailhead area near the cemetery entrance as well as installing interpretive signs telling people about the environment, Wier said.

Crescent City Councilors voted 4-0-1 in favor of a professional services agreement with GreenDot Transportation Solutions for an amount not to exceed $12,000. Councilor Isaiah Wright was absent.

GreenDot Transportation will complete the Clean California Grant application, which must be submitted by February, Wier said.

Communities can apply for up to $5 million in Clean California Grant dollars, though Wier said he anticipates the city applying for several hundred thousand dollars.

Since Crescent City qualifies as a disadvantaged community, its contributing match would be zero, according to Wier.

The city would find out if its application was successful in March, according to Wier. The dollars must be spent by June 2024.

The city will pay GreenDot Solutions out of dollars it has acquired through its risk management accreditation from Golden State Risk Management Authority, Wier said. For the past three years, the city has achieved full accreditation through GSRMA.

GSRMA offered a $50,000 incentive to Crescent City for each of those years it has received full accreditation, Wier said. The city has saved about $100,000 of those dollars, he said.

Part of the Elk Creek watershed, the greenbelt near Cooper Avenue and the cemetery has been a source of blight and a liability for the city for several years. Though there are homeless encampments in the area, Wier said the property has become a popular dumping site for people disposing of their household waste.

In a presentation to the Crescent City Council in June, Crescent City Police Chief Richard Griffin estimated the area to be several football fields long. It slopes off quickly and becomes a marshland with shoulder-deep water, he said.

On Monday, Griffin said there’s currently a locked gate and a barrier keeping people from accessing the area easily. But, he said, he advises his officers not to go back there because of the steep terrain and the water.

“A trail would help my staff go back through there more often than we are now,” Griffin told the Council. “It’s easy to drive by and not know what’s going on back there.”

Wier said he hopes increasing public access in that area through a trail will deter illegal dumping.

Since more work is needed in that area, DNSWMA Director Tedd Ward and Facilities and Programs Coordinator Kyra Seymour found the Clean California Grant program and brought it to Wier’s attention.

According to the city’s staff report, the Clean California Grant is administered through Caltrans and seeks to reduce the amount of waste and debris within public rights of way, pathways, parks, transit centers and other public places.

Wier noted that Crescent City also reached out to the Smith River Alliance, who, along with Stillwater Sciences, put together an urban stream feasibility study of the entire 8.26 square mile Elk Creek Watershed in 2019.

The study was paid for by the Coastal Conservancy, the California Department of Fish and Wildlife and Proposition 1 Water Bond dollars. In May, Wier said he hoped it could be used to develop nature trails or other amenities for visitors.

On Monday, former Del Norte County supervisor Roger Gitlin, whose Take A Bite Out of Blight program had attempted to tackle the cleanup of the city-owned property near the cemetery, asked if the county would be asked to participate in the development of a trail in the area.

Wier said that while the property does border the county, it’s within the city limits and is owned by the city. There are other privately owned parcels both within city limits and in the county’s jurisdiction that could be incorporated into future connectivity for the trail at a later date, Wier said.

County resident Elias Mavris told Councilors that his family owns property adjacent to the city’s greenbelt area and was hoping to work with the city.

Mayor Pro Tem Blake Inscore said that he was aware that the Mavris family owns about 12 acres directly north of the green belt. the city had conducted an environmental impact study before doing culvert repairs on Harding Avenue in 2016.

“I do believe this is the beginning of a much larger discussion that could provide an opportunity in the future of public-private ownership that could extend even beyond this,” Inscore said. “I think we’re at a point in time where we’ve got a lot of players coming together for the good of the community.”

On Monday, though Councilor Raymond Altman voted in favor of the PSA between the city and GreenDot Solutions to pursue the grant, he asked if $12,000 was a “good deal” to put together that grant application.

Crescent City Mayor Pro Tem Blake Inscore pointed out that the city doesn’t have the staff to seek out and pursue these grants.

“If we do not contract with somebody to do it, the opportunity simply passes us by,” he said. “To me, that adds value. If we want to do this and have it done by February of next year, which is right around the corner, sometimes you have to bring in a professional to do it.”