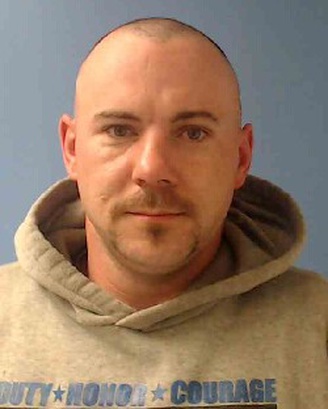 A Crescent City man was arrested after abandoned his vehicle while still in drive during a pursuit on Monday.

On 12-6-2021 just before midnight, Crescent City Police Department Officer Ethan Miller saw a vehicle towing a trailer that was dragging on the ground and emitting sparks. Officer Miller attempted to stop the vehicle in the 1300 block of Northcrest Drive, as it was a safety hazard. The driver of the vehicle, later identified as Donald Downard (age 32), then sped up and attempted to evade Officer Miller. Downard led Officer Miller on a short vehicle pursuit, about a mile, that ended in the 2000 block of Northcrest Drive as Downard fled the vehicle even though it was still in drive and moving forward. The vehicle continued forward until it crashed into a parked and unoccupied vehicle. Downard was located hiding behind a residence by Officer Miller and Del Norte County Sheriff’s Office Deputies who responded to assist.

During the investigation Downard was also found to be over the legal limit of alcohol while driving a motor vehicle. Downard was arrested for being under the influence while operating a motor vehicle, 23152 CVC, obstructing/resisting a peace officer in the performance of their duties, 148 PC, Hit and Run causing property damage, 20002 CVC, driving while suspended, 14601 CVC, evading a peace officer, 2800.2 CVC, and for two outstanding Arrest Warrants. Downard was booked into the Del Norte County Jail.