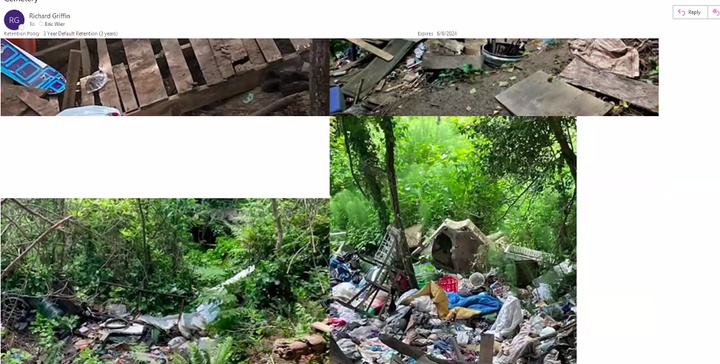 Multiple community partners will host a cleanup of a problematic piece of property near the Crescent City Cemetery on Saturday, and they’re seeking volunteers.

The Crescent City-owned property has housed multiple homeless encampments over the years, though they’re not occupied currently, said Tedd Ward, director of the Del Norte Solid Waste Management Authority. Much of the debris has been tossed down trails that lead from the cemetery down into the ravine, he said.

Along with the DNSWMA, the cleanup will be spearheaded by Crescent City, Del Norte Mission Possible, Veterans of Foreign Wars Post 1381 and DDR Cleaning & Hauling, according to a Solid Waste Authority news release.

“We anticipate there will be further cleanups and this is just the first of (what will) likely be a series, and perhaps not the largest of them,” Ward told the Wild Rivers Outpost on Wednesday. “We did want to get as much cleaned up as we could before the rains really hit.”

Volunteers should bring gloves and safety glasses, though Ward said some will be provided. This will be a COVID-safe event, so volunteers will be wearing masks if they’re closer than six feet, however most of the work will be done at a distance, he said.

“He’s been helpful in how we’re planning this,” Ward said. “He’ll be having these big bags dropped on the slope and we’ll be filling the bags up. And after the event, he’s going to be lifting those through block and tackles and pulleys and getting them into dumpsters. That way, we don’t have to carry stuff up the slope.”

Grabbers and pickers will also be provided so people don’t plunge their hand into an unknown area, Ward said.

Volunteers should also dress in layers and be prepared for changing weather. A lunch of hotdogs and hamburgers will be served to volunteers.